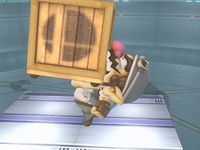 Item-swallowing is a technique in Super Smash Bros. Brawl, Super Smash Bros. 4, and Super Smash Bros. Ultimate, performable by Kirby, King Dedede, and Wario. These characters can use their neutral special moves to eat most items. Kirby and King Dedede use Inhale while Wario uses Chomp though Kirby can also use King Dedede’s Inhale and Wario’s Chomp as well to eat items if he copies them. Additionally, Munchlax uses the same list for the items it will eat.

When an item is swallowed, it takes some time for the character to swallow it. Light items are immediately swallowed, but non-explosive heavy items like barrels have the characters briefly remain bloated with the item in their stomach, before they eventually swallow it. Explosive items that are eaten will cause about 5% damage to the consumer, and if it is eaten by using Chomp, will also deal 13% damage to nearby opponents.

In Super Smash Bros. 4, it has been buffed, as Kirby and Wario can restore 1% damage from eating most items. Swallowing healing items has the same effect as using them normally. For example, swallowing a Fairy Bottle will heal 1% if the character is at less than 100% damage and will heal 100% damage if above. Wario and King Dedede gain 1.5x more HP from eating food items (Kirby can copy Wario's Chomp or King Dedede's Inhale for the same effect). Wario and King Dedede can also now eat energy projectiles like Ness's PK Fire and Mario's Fireballs, but do not receive any health. Finally, eating items, projectiles from items (like the Ray Gun's projectiles), and foods will increase the Wario Waft's charge for Wario.

In Super Smash Bros. Ultimate, it has been further buffed for both Kirby and King Dedede. Kirby, upon inhaling a projectile, can either spit it back out as a star or swallow it to recover some health. King Dedede's Inhale acts as a reflecting move, returning projectiles in their original form with a 1.5× damage multiplier.