The Metal Box (緑ブロック, Green Block) is an item from the Mario series.

A Metal Box, as it originally appeared in Super Mario 64.

The Metal Box made its appearance in Super Mario 64. It is a green Cap Block that materializes after Mario activates its corresponding green Cap Switch in the Cavern of the Metal Cap area of the Hazy Maze Cave level. After breaking it, the green Cap Block releases a Metal Cap which temporarily transforms Mario into Metal Mario, making him invulnerable (though he's still vulnerable to fall damage), but also extremely heavy.

In Super Mario 64 DS, the ! Blocks are replaced by red ? Blocks that materializes after activating the red ? Switch at the Rainbow Tower level. After breaking it, the ? Block releases a Power Flower, which has different effects on each of the game's four playable characters. If the player collects the Power Flower as Wario, then he transforms into Metal Wario, which features the same effects as the Metal Cap. 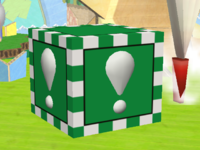 The Metal Box in Melee.

The Metal Box debuted as a transforming item in Super Smash Bros. Melee.

The Metal Box transforms the player's fighter who breaks it into a Metal fighter. Metal fighters make different metallic sounds while walking, running, and landing, depending on their weight for the most part. All lightweight fighters except Zelda, Mr. Game & Watch, Mewtwo and the Ice Climbers make a faint "tinging" sound; all middleweight fighters make a standard "clanking" sound; and all heavyweight fighters except Samus, Yoshi, Ganondorf, and Link make a much more noticeable "crunching" sound. Most of the aforementioned exceptional characters make the standard middleweight sound in spite of their weight. Mewtwo doesn't make any sounds, even when landing, and Mr. Game & Watch's footsteps and landing sounds are always electronic beep noises.

When used by Rosalina in Smash 4 and Ultimate, her Luma also transforms into metal. When used by Olimar/Alph, however, his Pikmin are not affected. In addition, only one of the Ice Climbers can use only one Metal Box and can turn into metal. Finally, controllable Final Smashes in Brawl and Smash 4 such as Giga Bowser, Wario-Man, Mega Lucario, and Giga Mac are not affected by breaking Metal Boxes.

In Melee, if the Metal Box is broken by disjointed attacks like Pikachu's forward smash or any attack from a sword-wielding character, they will still transform them into a Metal fighter. Interestingly, Ness' dash attack is the only disjointed attack that doesn't turn him metal. Also, if the Metal Box is hit by a projectile, it will disappear. Also, fighters can battle Metal Mario and/or Metal Luigi in Adventure Mode. In addition, they also fight a random metal character in Classic Mode.

In Brawl, the Metal Box cannot be broken when hit by projectiles, and the metallic walking sound effect no longer changes depending on the characters' weights, so everyone has the same sound when walking. It also features an effect on the new ability to swim; while characters will not sink as Metal Mario did in Super Mario 64, they will submerge deeper after falling into the water. This technique is used to reach a secret area in the Glacial Peak level of the Subspace Emissary. In Classic Mode, the player must also battle a random metal character.

In Smash 4, the transformation duration can no longer be extended by picking up additional Metal Boxes. In the 3DS version, the metal is translucent rather than opaque, but in the Wii U version, the metal texture is both opaque and reflective, with the current stage being reflected on the character's body.

In Ultimate, the Metal Box's effect appears to slowly take over the character rather than immediately, similar to Inkling's ink.

The Hero's Metal Slash ability will instantly KO any metal characters that it hits, and his Kaclang ability is able to turn him metal, being the only special move to do so.

Metal battles appear as a feature in Brawl's Special Brawl and in later games onward, where all fighters become metal under the permanent effects of a Metal Box. Also, in Ultimate's spirit battles, players can battle a puppet fighter that is either entirely made of metal or shifts into metal.

In all of its appearances, breaking the Metal Box feature the following effects:

The Metal Box appears as a red trophy item in Smash Tour. When used, it allows the player's fighter to start a battle in metal form.

Metal Box
First spotted in Super Mario 64, the Metal Box holds the power to turn your character briefly into heavy metal. Your mass is exponentially greater while metallic, making it difficult for others to throw you. Be careful, though: not only will you move a bit slower, but you'll also fall much more quickly than you ordinarily would.

Metal Box
A green box that transforms whoever attacks it into metal. In metal form, you're a lot heavier than normal, so middling and even strong attacks don't move you too much, and standard attacks won't even make you flinch. The time you spend in metal form decreases with the damage you take. In Super Mario 64, the weight of the metal form allowed you to walk underwater.

The Metal Box trophy appears in both versions.

Metal Box's trophy in Super Smash Bros. for Wii U

This green box will make you the ultimate defensive character, turning you into solid metal for a short time. You won't flinch from enemy attacks, even in midair, and it is much harder to launch you. On the other hand, you fall like a brick. Getting hit will reduce the duration of this item.

Whack this box to turn into a metal you! You won't flinch when attacked – even in mid-air – and you'll be harder to launch. Now, the downsides: you'll move slower, fall faster, and recovering when you fall off a stage will be a nightmare. Also, it's only temporary, or lasts until you've taken a certain amount of damage.

While the Metal Box itself does not have a spirit, several spirits will allow the player to start a battle in metal form.