This article is about Ganondorf's appearance in Super Smash Bros. Melee. For the character in other contexts, see Ganondorf.

Ganondorf (ガノンドロフ, Ganondorf) appears as an unlockable playable character in Super Smash Bros. Melee. His design (and model) is directly taken from his appearance from the SpaceWorld 2000 GameCube tech demo, which is itself based on his appearance in his original Gerudo form from The Legend of Zelda: Ocarina of Time. Ganondorf is a clone of Captain Falcon, and as such, he fights in a brawler style similar to Captain Falcon, but in a slower, more powerful manner.

Ganondorf is voiced by Takashi Nagasako, albeit via recycled voice clips from The Legend of Zelda: Ocarina of Time, which have been altered to sound more acute.

Ganondorf currently ranks 14th in the C+ tier on the Melee tier list, which is his best placement in the series. Ganondorf boasts extreme power, good reach, decent chaingrabbing ability, and very useful aerials, including the strongest meteor smash in the game in his down aerial. He also has several effective edgeguarding options including the aforementioned down aerial, both the strong and weak hitboxes of his up aerial, and his back aerial. Nonetheless, Ganondorf has extreme flaws to counteract these great strengths as well. He has a bad neutral game due to his poor dash dance and lack of non-committal approaching moves, forcing Ganondorf players to rely more on reads and baits, and the punishes that come with them. However, Ganondorf is also very susceptible to punishes himself, as he is easily comboed and chaingrabbed due to his size and weight, and is very easily edgeguarded due to his very predictable (albeit long) recovery; however, the latter would be among the worst should the aerial Wizard's Foot be absent during the process. He is also vulnerable to projectiles and has few ways to deal with characters that outrange him or have very fast attacks. Because of this, while Ganondorf has good matchups against characters ranked lower than him, and a few high tiers reliant on wavedashing for movement, he struggles to maintain ground against top-tier characters, such as Fox and Sheik.

To unlock Ganondorf, players must complete Event 29: Triforce Gathering or play 600 VS. matches.

Upon completing this, Ganondorf is fought on Final Destination, with the track "Great Bay" playing.

As a slower, larger clone of Captain Falcon, Ganondorf sacrifices speed for power and range. He is often considered to be the most powerful character in the game, boasting as many as sixteen KO options. This is counteracted by his poor mobility, as he has the 6th slowest dashing speed, the 3rd slowest air speed, and a rather short and slow wavedash. However, he possesses techniques that can partially circumvent his low speed, such as the Moonwalk, a great platform-dashing game, and one of the fastest and longest rolls.

One of Ganondorf's most notable strengths is his extreme power and damage output. His up smash, though laggy, is the strongest in the game if fully charged and both hits connect. His neutral special, Warlock Punch, and his notorious up tilt are two of the slowest moves in the game (the latter is the slowest), but can KO as low as 30%. His down aerial is both the strongest aerial attack and meteor smash in the game; it is notoriously difficult to meteor cancel regardless of damage percentage and is nearly impossible to recover from, even at low percentages, and can reliably star KO some grounded characters under 100%. Ganondorf's powerful attacks are counterbalanced by their slowness, but although most of his aerial attacks have long periods of landing lag, Ganondorf is perhaps the character that benefits the most from L-canceling, as it allows him to effectively combo other characters.

Despite Ganondorf's extreme power, he does not suffer from poor combo ability due to the knockback in his attacks, as he manages to retain some of the excellent combo ability from his clone. His aerials flow very well into each other, and when L-canceled, he can chase his opponents and land a follow-up despite his poor air speed. Due to his benefit from L-canceling, a low short hop, and decent falling speed, Ganondorf has a good SHFFL. The core of Ganondorf's combos lie in his grab game; despite a rather poor grab range, his throws have immense versatility, and his up and down throws are excellent launchers, as well as effective chain-grabs. His forward and back throws can also set up edgeguards.

Ganondorf's greatest strength, however, is his superb edge-guarding game. Despite his poor air speed, he is one of the best edge-guarders, with more aerial guarding options than any other character in the game; all of his aerials deal high damage and knockback and are guaranteed to knock foes offstage; his down air is an extremely powerful meteor smash, and Wizard's Foot is a non-recoverable spike. In particular, his sourspotted reversed up aerial (performed while facing away from the edge) is one of the best gimping moves in the game because of its long duration, range, semi-spiking knockback (hard to tech out of) at a 20° (rear hitbox) or 0° (rear bottom hitbox) trajectory with gravity following suit, extremely high hitstun, and cannot be DI'd due to its low knockback.

Ganondorf's major weakness is his poor approach and neutral game. Although his weight and quick falling speed enables him to live longer, they also make him highly susceptible to combos and chaingrabs. His mobility and approach are ultimately crippled by his short, relatively slow wavedash and poor dashing and air speeds. A lack of a projectile also makes it difficult for him to break opposing camping. He also has a very poor dash-dance, as it is among the shortest in the game and leaves him vulnerable to being camped or rushed down. Additionally, he lacks safe moves that allow him to approach noncommittally. As a result, Ganondorf is dependent on punishing opponents through reads and baits.

Ganondorf is also regarded as one of the most easily edge-guarded and edge-hogged characters in the game. On paper, he has a long, extendable horizontal recovery, thanks to his down special, Wizard's Foot, which is one of the only two specials that allow the character to regain their midair jump (the other being Falcon Kick, but is considered inferior to Wizard's Foot because of how much farther downward it travels and Captain Falcon's higher falling speed). Ganondorf's aforementioned abysmal air speed prevents him from efficiently moving off-stage, and his mid-air jumps fail to give enough height to reliably recover offstage. This makes edgehogging very threatening if Ganondorf is positioned poorly offstage.

Overall, Ganondorf is a powerhouse; with some of the strongest moves in the game, he can easily KO the entire Melee cast at very lower percents with his powerful moves. All that's holding him back are his unimpressive mobility and prediction-reliant neutral game, requiring players to play a bait-and punish style to try and land his powerful moves while being careful not to get attacked himself.

Ganondorf struggles more often than Captain Falcon due to his slower mobility and a weaker combo game, causing Ganondorf to be more prediction-reliant when approaching and having more difficulty in competing with faster characters like Fox or Sheik. However, Ganondorf boasts noticeably stronger attacks, a more dangerous edgeguarding game, and greater reach. He also has no sourspots on his attacks barring his forward tilt, and still retains a few of Captain Falcon's good combo starters, enabling him to still have an good combo game. Despite being designed as a "slower" Captain Falcon, almost all of Ganondorf's moves have the exact same frame data in terms of start-up and ending lag, although all his aerials do have much higher landing lag. A few of Ganondorf's moves also have different knockback angles, usually toward vertically rather than horizontally. Finally, Ganondorf has more electric effects in addition to darkness on his attacks, with only one move (up tilt) using flame.

The PAL version of Melee nerfed two of Ganondorf's aerials, with his forward aerial no longer being a reliable KO move (although it can combo into itself better), and his down aerial dealing less knockback and damage (while still remaining the strongest meteor smash in the game.)

For a gallery of Ganondorf's hitboxes, see here. 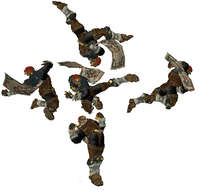 Ganondorf performing his forward aerial after a wall tech on Captain Falcon. The move's base knockback is high enough to gimp characters with subpar recovery at any percentage.

An orchestrated portion of the main theme from The Legend of Zelda series.

Any number following the Smasher name indicates placement on the 2019 MPGR, which recognizes the official top 100 players in the world in Super Smash Bros. Melee.
See also: Category:Ganondorf professionals (SSBM)

Historically, Ganondorf has been considered a high or mid-high tiered character, having fluctuated between 8th and 12th for the first eleven tier lists. Although Ganondorf's great power and strong punish game enabled him to maintain a more powerful presence in the early metagame, this was due to players being less experienced with the character and defensive counter play was less developed. With a better understanding on how to check Ganondorf, his ground with the rest of the cast began to falter, and his flaws became more exacerbated due to Ganondorf players being unable to fend off fast-paced and careful approaches from characters like Falco and Sheik. Yoshi and Pikachu have developed vastly improved counterplay on his chaingrabs, with the former now considered to win against Ganon. As a result of the metagame shifts favoring against him, Ganondorf's tier placement faltered. This is reflected in the most recent tier list where he is ranked 14th, the lowest he has ever placed.

Like Roy and Sheik, Ganondorf does not appear as an opponent in the game's Classic Mode, though he can appear as an ally in Team and Giant battles. Despite this, Ganondorf does have an introduction image for the "Now Loading..." screen between matches programmed into the disc.

Upon being unlocked, Adventure Mode makes no concessions to Ganondorf whatsoever.

In All-Star Mode, Ganondorf and his allies are fought on Brinstar Depths. Unusually, the music remains unchanged.

Ganondorf is featured in the following event matches:

In addition to the normal trophy about Ganondorf as a character, there are two trophies about him as a fighter, unlocked by completing the Adventure and All-Star Modes as Ganondorf, respectively, on any difficulty:

Ganondorf
Said to be the sole man born to the Gerudo tribe in a hundred years, Ganondorf aspired to conquer the world. He plundered a piece of the sacred Triforce from the Temple of Time when Link pulled the Master Sword from its pedestal. With the Triforce of Power in Ganondorf's possession, Hyrule was plunged into darkness until Link and Zelda defeated the fiend.

Ganondorf [Smash]
Since he's slow and can't jump very high, Ganondorf relies mainly on his immense physical strength to overwhelm his enemies. His great weight also makes him a difficult foe to send offscreen. Ganondorf's Warlock Punch is slow but absurdly powerful, and when he strikes with his Gerudo Dragon, enemies rise skyward enveloped in dark flames.

Ganondorf [Smash]
Ganondorf's slow speed works against him in single combat, but in melees, his crazy power lets him earn his keep with innumerable KOs. Ganondorf can't strike quickly, but each blow he lands adds up. Ganondorf is at his quickest when he uses the Wizard's Foot, and his Dark Dive blasts foes in a burst of dark energy.

Ganondorf's scrapped second Jab from version 1.0 of Melee, which is visible and usable by mods.