Warlock Punch (魔人拳, Demon-Man Fist) is Ganondorf's neutral special move. In every game since its introduction in Super Smash Bros. Melee, it has consistently been one of the most powerful attacks of any character that is not a Final Smash.

Ganondorf slowly clenches his fist, moves it backwards and then releases a heavy forwards punch with a darkness effect. It is extremely similar to Captain Falcon's Falcon Punch, with the main difference being that Warlock Punch is slower and stronger. The move comes out extremely slowly, taking over a second to come out but it has immense power, dealing at least 30% and being capable of KOing opponents in the low double digits or even in the single digits depending on the character/stage position.

From Super Smash Bros. Brawl onward, Ganondorf can turn around during the startup of the punch to perform a Reverse Warlock Punch. A reversed Warlock Punch is even slower however, it does deal more damage and knockback to make up for it. Additionally, unlike Falcon Punch in Brawl, Smash 4, and Ultimate, it does even higher damage and knockback if done in the air, and both the reverse and air bonuses can actually stack.

In Super Smash Bros. Melee, Warlock Punch comes out on frame 70, its hitboxes last for 3 frames and it takes 119 frames to complete. This naturally makes it an incredibly difficult move to land as its extremely slow speed makes it incredibly easy to avoid and heavily punish, as well as making it very limited as a punishment option on its own due to its poor speed. The move cannot really be used as a guaranteed followup either due to its extremely poor speed. Additionally, it also has a small hitbox size, so it is overall harder to land than its visuals may often suggest.

Overall, Warlock Punch is an extreme risk, extreme reward move which is incredibly situational at best. The move is simply far too slow to justify using in almost all scenarios. Even in scenarios it can be used, up tilt may be the preferred option as it is usually stronger and it can hit below Ganondorf more reliably (although Warlock Punch is faster and can be used in the air). It is not only Ganondorf's worst move but it is even considered to be one of the worst moves in the game due to its extremely slow speed.

In addition to dealing consistent damage and doing much more damage while airborne, starting from Brawl, a player can pull off a 180° punch by turning in the opposite direction during the beginning of the charging period. This is known as a Reverse Warlock Punch. This version of Warlock Punch deals roughly 3% more damage than a normal punch with more knockback. This move can be done on the ground and in midair, but on the downside, it is 0.167 seconds longer, or 10 frames slower, than a normal Warlock Punch. This reversed move is good for mindgames (as with Falcon's) and does serve as a way to turn a match around, but is still very laggy.

Warlock Punch usually guarantees a KO at around 20-29% damage upon connecting and a reverse aerial Warlock Punch being able to KO Mario at 5% from the middle of Final Destination, the second lowest of any special move without special criteria (such as Oil Panic), behind Ike's stage 8 Eruption which KOs at 2%. Kirby's Warlock Punch after copying Ganondorf is slightly weaker, with reverse aerial KOing Mario at 7%.

In Super Smash Bros Ultimate, all hitboxes had their durations increased by 2 frames, and the super armor lasts much longer, being active from 11-67 for normal and 21-75 for the reverse. Landing the move also triggers the Special Zoom effect. The hitboxes have been made smaller, however, making the move a bit more difficult to connect.

Warlock Punch has four stages of power depending on what type of punch is performed. Smash 4 KO percents assume no DI on Mario and in the middle of Final Destination. 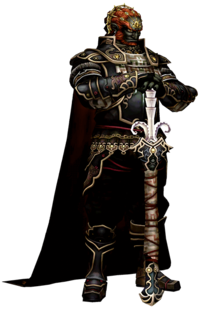 Ganondorf's official artwork in Twilight Princess depicts him with the Sword of the Six Sages.

Ganondorf has never used a move resembling the Warlock Punch in any The Legend of Zelda game.

The customizable move for Warlock Punch, Warlock Blade, involves Ganondorf wielding the Sword of the Six Sages, which he used extensively during the final battle in The Legend of Zelda: Twilight Princess. The sword was used by the Sage of Water in an attempt to execute Ganondorf for his crimes, but the Triforce of Power kept Ganondorf alive and he proceeded to kill the Sage of Water, keeping the sword throughout the events of the game.