The game released in Japan on January 21st, 1999, in North America on April 26th, 1999 and in Europe on November 19th, 1999 for the Nintendo 64. Subsequently, it released on the iQue Player in China on November 15, 2005. It was re-released on the Wii Virtual Console on January 20th, 2009 in Japan, a day before its 10-year anniversary, and later that year in Europe and North America, before becoming unavailable after the Wii Shop Channel shut down on January 30th, 2019.

Super Smash Bros. received positive reviews, with most praise going to its multiplayer mode, while its single-player mode received some criticism. The game has sold 5 million units worldwide as of 2001, making it the fifth best-selling Nintendo 64 game of all time.

The opening movie in Super Smash Bros., unlike later games in the Super Smash Bros. series, completely lacks pre-rendered footage. It instead opts to use the game engine to render everything in real-time.

When the opening movie starts, two random starter characters are placed by Master Hand on top of a desk, which shortly transitions to a scene resembling Peach's Castle. This process is repeated every time the opening movie is played.

As the opening movie concludes, the figures of the four unlockable characters are flashed against a white background. If a character hasn't been unlocked, they will simply be shown as a silhouette; conversely, they will be revealed once unlocked.

Finally, the opening movie segues into the title screen, a trend which would be followed by future installments, along with the announcer calling out the game's title. 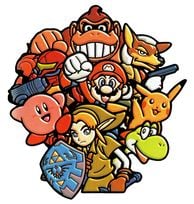 Official artwork of the default cast of Smash 64. 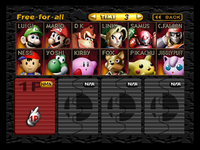 The character-selection screen of Super Smash Bros. (all characters unlocked).

There are twelve playable characters in Super Smash Bros., eight of which are available from the start and four of which are unlockable.

The highest amount of character slots are given to the Super Mario and Pokémon universes with each receiving two fighters: Mario alongside his brother Luigi, and Pikachu and Jigglypuff respectively, with the latter characters in both universes being unlockable.

The other starter characters are Link, Samus, Kirby and Fox from The Legend of Zelda, Metroid, Kirby and Star Fox universes, respectively. The final remaining characters, as with Luigi and Jigglypuff, are unlockable: Ness of EarthBound and Captain Falcon of F-Zero.

The game features nine stages derived from each character's universe, exceptions being EarthBound and F-Zero. While most universes receive a single stage, Mario uniquely has two instead: Peach's Castle and the only unlockable stage in the game, Mushroom Kingdom. Besides of that, the other stages consist of Congo Jungle, Hyrule Castle, Planet Zebes, Yoshi's Island, Dream Land, Sector Z, and Saffron City from Donkey Kong, The Legend of Zelda, Metroid, Yoshi, Kirby, Star Fox, and Pokémon respectively.

Shown in bold, Mushroom Kingdom is the only unlockable stage in Super Smash Bros.

These stages only appear in the 1P Game.
*The 1P Game-only Yoshi's Island lacks clouds and has closer blast zones.

These stages cannot be unlocked or played on in any way without hacking.

Unlike its successors, Super Smash Bros. never enjoyed a large professional competitive scene in North America. However, interest in the game has been renewed in recent years with the popularity of its sequels. Players can play Super Smash Bros. online through Kaillera using the Project64k emulator. Every year, there are more and more Super Smash Bros. tournaments due to an influx of new players. Most tournaments are paired with Melee events and most (offline) SSB tournaments are located in California, Canada, New Jersey or Peru.

After development on the Kirby Super Star wrapped in 1996, creator Masahiro Sakurai wanted to create another property. He developed two different prototypes concurrently: a stealth and exploration based RC robot adventure game, and a four player free-for-all fighting game with no health bars. A long-time fan of fighting games, paricularly games developed by SNK, he was interested in making a beginner friendly fighting game for four players. A specific inspiration for such an idea came from an experience at a local arcade where he had a winning streak on King of Fighters '95 and felt pleased with himself, only to feel guilty upon realizing his opponent was a beginner and their partner. This made Sakurai realize that not everyone is a master, so a game designed for newcomers to have fun regardless of skill level would be a good idea.[1] He also was concerned about how the fighting game genre was becoming increasingly combo-centric and how that invalidated the skills of the player being comboed. Command-input moves were also becoming increasingly complex, and Sakurai wanted controls that tested speed and reflexes instead of muscle memory, which culminated in tilt attacks and smash attacks that can be performable with a wide range of skill levels while still having a level of depth and strategy.[2]

His initial design for the game was called Kakuto-Geemu Ryuoh (Dragon King: The Fighting Game),[3] which featured simple characters. After presenting the game to co-worker Satoru Iwata, he helped Sakurai continue on with the project. Realizing that the RC game would take much longer to develop, he shelved the concept and went all in on this fighting game. Sakurai understood that many fighting games did not sell well, so he tried to make his game original.[3] After presenting a pre-alpha demo to HAL Laboratory, he was approached by a fellow employee who suggested the game should include famous Nintendo characters as a way to market the game.[3] Initially hesitant about the idea, he was later convinced and began retooling his demo. Sakurai has since claimed that filling a game with preexisting characters is more welcoming to new players instead of bombarding them with many original characters they are unfamiliar with. Knowing full well that he would not receive permission to do include their characters, Sakurai created a prototype of the game without sanction from Nintendo and did not inform them until he was sure the game was well-balanced.[3] The prototype he presented featured Mario, Donkey Kong, Samus Aran, and Fox McCloud as playable characters. The idea was later approved.[3][4] Although never acknowledged by Sakurai or any developers behind Super Smash Bros., third party sources have identified Namco's 1995 fighting game The Outfoxies as a possible inspiration.[5][6]

HAL Laboratory was assigned as primary developers, as Sakurai was employed by them at the time. While Sakurai and Iwata were initially the only developers, as other projects in HAL Laboratory either were finished or fell through, more employees were brought on the project to assist them. Multiple characters, including Marth, King Dedede, Bowser, and Mewtwo were planned to be playable at one point, but were all cut for various reasons.

Super Smash Bros. features music from Nintendo's most popular gaming franchises. While many tracks are new arrangements for the game, some songs attempt to directly emulate their sources. The music for Super Smash Bros. was composed by Hirokazu Ando, who later returned as sound and music director for Super Smash Bros. Melee. A complete soundtrack was released on CD in Japan through Teichiku Records in 2001.[7]

Marketing teams and wholesalers were initially skeptical on the market viability of Super Smash Bros., as they were unsure how the public would respond to Nintendo characters beating each other up. Resistance from fighting game players were also met during the launch period, as they had many preconceptions of what a fighting game is and were uncomfortable with a wildly different product labeling itself as a fighting game. To alleviate this tension, Sakurai created the Smabura-Ken website that delved deep into all the new and different concepts.

To promote the game's launch, Nintendo of America staged an event called Super Smash Bros. Slamfest '99, held at the MGM Grand Adventures Theme Park in Las Vegas, Nevada, on April 24th, 1999. The event featured a real-life wrestling match between costumed performers dressed as Mario, Yoshi, Pikachu, and Donkey Kong, as well as stations set up for attendees to preview the game. The wrestling match was live-streamed on the web via RealPlayer, and was available to be re-watched for several months afterward via a downloadable file from the event's official website. Despite this, no video footage of Slamfest '99 is known to survive, and the broadcast is currently considered lost media.

Super Smash Bros. was a commercial success, selling 5 million copies worldwide with 2.93 million sold in the United States and 1.97 million copies sold in Japan. It was the 5th best selling game for the Nintendo 64. Reviews were mostly positive, with many critics praising the game's addictive and fun multiplayer gameplay and simple controls, but it was criticized as well, mainly due to the game's lower amount of content and somewhat limited single-player mode.

Super Smash Bros. is the only game in the series with the following distinctions: