For other uses of the term, see Stage (disambiguation). 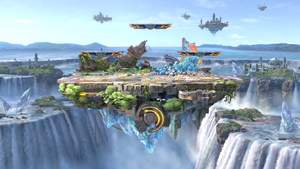 A stage (ステージ, Stage), also called a level, map, arena, stadium, or board, is a location in which characters fight or complete objectives. The word "stage" refers to the entire loaded location, but can also refer to the ground or large central platform within the level. Though versus mode stages are the most commonly recognized and utilized, single-player mode stages such as Race to the Finish or Trophy Collector exist as well for purposes other than fighting others.

Most versus mode stages in each of the Super Smash Bros. series games are available from the start, though a small number must first be unlocked by completing certain objectives. Since Super Smash Bros. 4 some stages are made available through updates and are downloadable. Most stages, like Princess Peach's Castle, are derived from places in playable characters' universes. Super Smash Bros. Melee introduced two stages unique to the Super Smash Bros. universe — Battlefield and Final Destination. In Super Smash Bros. Brawl, stages derived from universes without associated playable characters were introduced, namely Smashville, Hanenbow, and PictoChat. Additionally, not every playable character has a stage from their own universe; the Fire Emblem universe lacked one in Melee (though one was planned), and the R.O.B. universe has, for unknown reasons, never had a stage. Since Melee, each Smash game has included several Past Stages that debuted in previous games. These stages have either no or minor alterations (an example being Dream Land in Smash 4, where the top blast line is much closer to the stage than it was in 64 or Melee). Super Smash Bros. Ultimate changes this, giving older stages a more refined and detailed design.

Stages range in size from the large The Great Cave Offensive and Rumble Falls to the small Yoshi's Story and Peach's Castle. Typically, stages involve a large central platform with ledges, multiple smaller platforms, and blast lines above, below, and to the left and right of the visible area. Some stages, such as Mushroom Kingdom and Coliseum, have floors that continue past the edge of the visible area and pass through a side blast line. These edges are known as "walk-off edges" or "walk-offs" because characters can walk offscreen without the need to become airborne. Stages with walk-off edges on both the left and right, like Bridge of Eldin, are referred to as "walk-off stages", and only a select few, like Yoshi's Island, have only one walk-off. Some walk-off stages, such as Onett, have lower blast lines that are inaccessible normally, while others, such as Green Hill Zone, only infrequently have the lower blast lines introduced; still others, such as Mushroom Kingdom, have permanently-accessible gaps where players can fall past the lower blast line while still having solid ground covering most of the lower blast line, including its intersections with the left and/or right blast lines.

In Melee, moving and transforming stages were introduced. Big Blue and Rainbow Cruise consist entirely of platforms that move or appear on and offscreen, while stages like Icicle Mountain and PAC-LAND scroll continuously up, to the side, or down. Other stages, such as Pokémon Stadium, undergo partial transformations at certain intervals, while others, such as Castle Siege and Paper Mario, cycle through complete transformations. Similarly, stages like Delfino Plaza and Skyloft will take players to various areas via moving platforms. Mushroomy Kingdom may be one of two stages either randomly or based on a player's input prior to the match. Tortimer Island's, Gamer's, Balloon Fight's, Garden of Hope's, and Minecraft World's layouts are randomized to varying degrees for each battle as well.

Other stage elements include breakable barriers and platforms, such as the pillars of Luigi's Mansion and the stone floors of Skyworld; stage hazards and enemies, such as lasers, cars, and Klaptraps; local items such as apples; and interactive objects such as Barrel Cannons and switches. While water has no effect on movement in Melee outside of the flowing river in Jungle Japes, Brawl introduced swimming; a few stages, such as Delfino Plaza, feature bodies of water that characters can swim in.

From Brawl onwards, the appearance of some items, namely crates and barrels, differs depending on the aesthetic style of the stage they appear on.

In competitive play for every game, many tournament organizers prohibit the majority of stages (and in 64's case, all but one) from being selected due to being considered disruptive, unfair, or unbalanced by many high-level players[citation needed] (see stage legality). Ultimate tournaments often also require stage hazards to be disabled.

This is a list of multiplayer stages in the Super Smash Bros. series.

The following does not include some single-player stages which can be playable with more than one player.

) (not the top ones), that means a new version of the stage appears in that game.

means the new version appears in both the 3DS and the Wii U version.

Some stages have different names in different games. The stage's name will be marked with the game's symbol to indicate which game had which name.

Versus mode stages by game[edit]

The stage select screen in Smash 64.

There are nine versus stages in the original Super Smash Bros.; eight starters and one unlockable stage: Mushroom Kingdom, shown in bold. 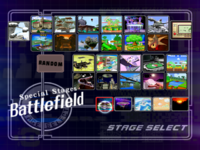 The stage select screen in Melee.

There are 29 versus stages in Super Smash Bros. Melee; 18 starters and 11 unlockable stages, shown below in bold. The three past stages are unlockable. Unlike the other games, each stage has a greater location listed as its stage prefix rather than which game it is from.

The stage select screen in Brawl.

The Melee Stages screen in Brawl. 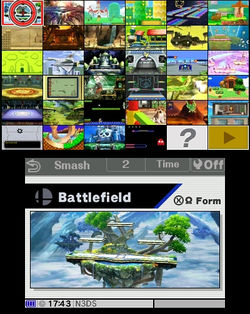 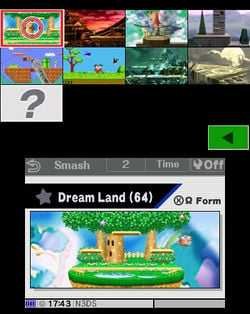 The stage select for Super Smash Bros. for Wii U, showing the normal stages.

The stage select for Super Smash Bros. for Wii U, showing the extra stages.

All stages now have an optional Ω form (Omega Form), changing their layout to be similar to Final Destination - some have walls that go all the way down to the bottom blast line, while others are basically floating islands.

Most stages can be played with up to eight players in the Wii U version, though some are too complex or too small to handle that many fighters at once and will be disabled in the stage select when more players than allowed are present. Normally this is the traditional four (marked 4P below), but some stages will still allow up to six (6P). Conversely, some others are restricted to four players even on their Ω forms (4Ω), whereas most stages still allow the full eight on their Ω form even if restricted otherwise.

Starting from this game is the disabling of Star KOs and Screen KOs on certain stages.

The stage select for Super Smash Bros. Ultimate with the "First to" rule set to 3 Wins or more.

Not counting either single-player only stages or previous versions of Battlefield and Final Destination, there are only 15 stages that do not return in Super Smash Bros. Ultimate; two from Smash 64 (Planet Zebes and Sector Z), four from Melee (Icicle Mountain, Mute City, Mushroom Kingdom and Poké Floats), two from Brawl (Rumble Falls and PictoChat), two from for Nintendo 3DS (Rainbow Road and Pac-Maze), and five from Smash for Wii U (Miiverse, Woolly World, Orbital Gate Assault, Jungle Hijinxs and Pyrosphere). Flat Zone and Flat Zone 2 do not return either, but Flat Zone X is an amalgam between them. Another unique case is the World 1-2 version of Mushroomy Kingdom that is also absent.

A new rules option allows stage hazards to be turned off. Stages are ordered by when they first appeared in the Super Smash Bros. series. Unlike previous entries, all stages are available from the start. Ultimate also introduces Stage Morph, an option that allows players to choose two different stages which will transition back and forth over the course of a battle.

In the previous titles the player would go to the character selection screen prior to selecting a stage, but in Ultimate this process was reversed.

In the single-player modes and challenges, a number of stages appear that aren't available in versus mode without hacking or accessing it via the Debug menu.

Note: In Brawl, most of these stages can be played with two players.

Note: As with Brawl, most of these stages can be played with two players.

Note: As with Brawl and the Wii U version, some of these stages can be played with two players.

Some stages are inaccessible through normal means. These non-playable stages are accessible only through the use of hacks and debug programs, such as Action Replay. Some, such as "Test", were presumably used for testing during game development, while others, such as the "Tutorial Stage", are used in the game but not for the purpose of gameplay.

Brawl introduced the Stage Builder, a tool that allows players to build their own stages, for use in multiplayer matches, using sets of provided objects, some unlockable. Brawl includes a set of Sample Stages that were built using the Stage Builder. The stage builder can also be used to build No KO stages and "CD Factories" - exploitative stages used for quickly obtaining CDs. The Stage Builder returns in Super Smash Bros. for Wii U, with some features removed and other features added. In version 3.0 of Super Smash Bros. Ultimate, the stage builder was released.

Only Versus Mode stages are even considered to be tournament legal, as hacking the game to use single player stages and the requirement for each what would be tournament legal custom stage to be on each console are too much of a hassle for tournament organizers. After that, the general requirements for stage legality are usually minimal random events, no significant mid-match layout alterations, no design aspects that promote camping or stalling, and no design aspects that give a player an unfair advantage over their opponent. For these reasons, relatively few stages are universally agreed as tournament legal, with the rest being banned. While the legality of every stage will forever be contested and debated, most major tournaments abide be the same stage setlist and must unanimously agree to ban or unban a stage.