The main body of the stage is a large dirt platform covered by grass, whose sides can be wall jumped off of. The bush on the right and the foliage of the tree on the left act as soft platforms. Occasionally, a patch of grass may pop up in front of the main field of grass, which hides characters and items behind it due to the stage's 2D effect. The look of the stage is based on the game's native 4:3 aspect ratio, with the side blast lines being located beyond the pillar-boxes on either side of the main platform.

The HUD displayed on the screen during play shows the round number, the quantity of ammo left, a duck meter, a gauge below the duck meter indicating the minimum amount of ducks to knock down, and the current score. The HUD in the standard version of the stage in Super Smash Bros. for Nintendo 3DS moves with the camera.

During the match, one or two ducks appear at a time. They plunge into the grass when hit by an attack, increasing the score and occasionally dropping items. The 8-bit dog then appears to collect the fallen ducks or laugh if no ducks were hit, concurrently acting as a temporary platform. If players knock down the minimum number of ducks to move on to the next round after ten ducks appear, then the next round begins. Green ducks give 500 points, blue ducks give 1,000, and red ducks give 1,500. If all ten ducks are knocked down, a "Perfect" sign is displayed in the center of the stage just as in the original Duck Hunt, adding 10,000 points to the total. If the minimum quota is not met, it will restart from the first round. There are 10 rounds in total, with a maximum potential score of 158,000, before the score resets to zero and it resets to the first round. In 8-Player Smash, Duck Hunt's unlocking battle in Super Smash Bros. for Wii U, All-Star Mode in SSB4, or when hazards are turned off, no ducks nor dog appear at all. Scoring points and advancing through rounds has no effect on gameplay whatsoever.

In Super Smash Bros. 4, the Ω form removes the bush, the ducks, the dog, the tree, and the patches of grass the player can hide in. Additionally the platform is shortened slightly to match that of Final Destination. However, the HUD remains fixed and does not move with the camera.

In Super Smash Bros. Ultimate, the Ω form and Battlefield form are similar to SSB4's Ω form; however, the main platform does not extend below the blast line and is resized and reshaped to match Final Destination and Battlefield, respectively. The three soft platforms of the Battlefield form resemble the texture of the ground and are unique to this form. The characters are still flat, which also flattens the hitboxes and alters gameplay significantly as a result. 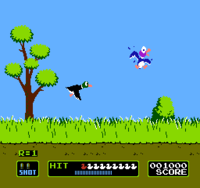 The stage as it originally appeared in Duck Hunt.

The stage is based on the original Duck Hunt game for the NES. In the game, players use the NES Zapper light gun accessory to shoot their targets down. Players must choose to play either Game A, B, or C. One duck appears at a time in Game A, and two ducks appear at a time in Game B. In Game C, players are tasked with shooting clay pigeons which are tossed from the foreground to the background. This stage combines both Game A and B, as either one or two ducks will appear at a time.

Prior to 2017, this stage was legal in most tournaments, however, the 2017 recommended ruleset has made this stage banned in tournaments. Reasons behind this ban included the singular tree which promoted camping against characters with poor vertical movement (most notoriously Little Mac), the low distance relative to the stage and the bottom/side blast lines, infamously the Duck Hunt dog itself who would occasionally interrupt gameplay (or even save a player from a punish) and the fact that the ducks, which would increase the score on the bottom of the screen when hit, may have been distracting for some players, as the game encouraged them to hit the ducks instead of focusing on the opponent.

However, arguments against the stage's ban included the relative neutrality of the main platform and advantages offered by the tree, allowing it to be used as a counterpick stage for characters with otherwise weak vertical finishers. Additionally, the ducks could be used as a technical advantage due to their ability to refresh stale moves, similar to hitting balloons on Smashville. Overall, this decision has been met with mixed reception, with one notable example of opposition being from ESAM, who has made a video addressing his feelings on the subject.