From SmashWiki, the Super Smash Bros. wiki
(Redirected from Taunting)
Jump to navigationJump to search

Captain Falcon's down taunt in SSB4.

Bayonetta's up taunt in Ultimate.

Mario's side taunt in Brawl.

A taunt, previously referred to as a finishing pose and as Appeal internally (AppealL and AppealR in Super Smash Bros. Melee's Debug menu) and in Japanese, is a move designed to provoke, annoy or mock opponents or to just celebrate a successfully executed move or combo. In Super Smash Bros. and Super Smash Bros. Melee, each character has only one taunt, but from Super Smash Bros. Brawl onward, they have up to three different taunts: up, down and side taunt. To use a taunt, the player must press the L button in SSB and up on the D-Pad in Melee. In Brawl, Smash 4 and Ultimate, the direction the player presses on the D-Pad (or the buttons on the Wii Remote for Brawl and For Wii U) determines which taunt is used.

In Super Smash Bros., there is only one taunt animation, so characters that taunt either face the screen or away from it depending on whether they are facing left or right. This was changed in Melee so characters that turn towards the screen have slightly different animations, making sure they never face away (unless they are caped). Using this functionality, Pichu and Captain Falcon's taunts in Melee have two distinctly different animations depending on the direction they are facing. While this trait stuck with Captain Falcon for his later appearances, Pichu's different taunts were mapped to different inputs. Additionally, Wario has an extra taunt when he is riding his bike, used by pressing any of the taunt buttons. Taunts can all be done on the ground only and are canceled if the character goes airborne or slides close to an edge during their execution.

Taunts are different between every character - even those who are direct clones of another, with the exception of Ryu and Ken’s side taunt, where they hold their fist forward, though the words they speak while performing it are different, and Ken also bumps his fists together first before performing the animation. However, taunts always have the character doing a motion (such as dancing) and the character may speak or yell out a battle cry, which is often taken advantage of within taunt matches. Taunts have variable durations between characters, some of which are very noticeable, such as Young Link's taunt in Melee, which is the slowest in the game, taking more than three times longer to finish than Kirby's taunt, which is the fastest in the game. However, some characters such as Mario in SSB, Pikachu in Melee and Bayonetta in Smash 4 can interrupt their taunts noticeably earlier than the end of the animation. In Ultimate, this feature is amplified to every taunt in the game except those that affect gameplay (such as Greninja and Luigi's down taunts), being all interruptible on frame 50 regardless of their animation length, although several of them have faster animations than in previous games regardless.

Cloud and Sephiroth are the only characters in non-Japanese versions of the series who still speak Japanese in any of their taunts as of Super Smash Bros. Ultimate. However, some "speaking" taunts change between languages. A notable example is Jigglypuff, whose dialogue changes to reflect its name in other languages, such as its Japanese name, "Purin" or Fox in Melee, when he says "kakatte koi" ("come on").

One of the intended uses of taunting is after KOing an opponent, which is implied by CPUs using them as such at all times in Melee and Brawl; in the latter game, this includes the opponent self-destructing or getting KOed by a teammate of the CPU. Similarly, in SSB, they taunt any time they launch an opponent a far distance away. In SSB4, this was changed so CPUs will not always taunt, with their likelihood decreasing as their level increases: level 9 CPUs will never taunt on the whole. While CPUs usually never use taunts for other purposes (such as removing Copy Abilities as Kirby), CPU Luigi in SSB4 will, interestingly, attempt to use his down taunt against foes hanging on ledges. Unlike in the previous titles, CPUs in Ultimate don’t taunt at all with the exception of Figure Players. Also in Ultimate, Figure Players can use their taunts during the battle, with the frequency of the taunt and which taunt they perform being able to be determined by the player as they learn.

In Ultimate, taunts are disabled during online Quickplay matches, even those that affect gameplay (excluding Kirby discarding a Copy Ability). However, they can still be performed in Battle Arenas.

The vast majority of taunts are only for show, having no direct affect on gameplay except shifting the fighter's hurtboxes during the animation. They instead serve as an integral part of mindgames. Taunting at the right time can surprise the opponent and provoke a desired reaction. Situations where a taunt can be useful include when the opponent is losing to demoralize them, when the opponent is winning to goad them into acting reckless and potentially making a mistake, during an attack to catch the opponent off guard, and when the opponent is about to lose as a form of disrespect.

Most taunts are completely deterministic gameplay-wise, with only a few aesthetic aspects that may be randomly determined (such as voice clips or particle effects). Certain taunts have different animations depending on which way the character is facing, and in the case of Captain Falcon, his down taunt is faster when facing left than when facing right. Pac-Man's Namco Roulette is one of the few taunts to be entirely random, summoning a sprite and sound clip from a large variety of retro Namco games, but its animation and gameplay effect is always the same regardless of which sprite appears.

Snake's cardboard box is an example of a taunt that can be used as an attack.

Despite the explanation above that taunts are for show, a small amount of exceptions exist that do tangibly affect the game in a meaningful way. These taunts are the following:

In Ultimate, while most taunts are interruptible, most of the gameplay-affecting ones are not. The only exceptions are Kirby's taunts.

The side taunt input specifically can be used as a stand-in for the button press on certain moves that have command inputs. This include all variants based on how long the button is pressed. The inputs that can be used with side taunt are the following:

Some fighters have unique taunts that can only be accessed on certain stages. These taunts are the following: 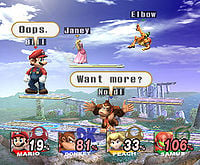 One feature of Super Smash Bros. Brawl's With Friends mode when playing on Wi-Fi Connection is that it allows a player to assign four different taunt messages to all four taunt button combinations. If the player were to perform an up taunt on the With Friends mode, their character will display a personalised taunt message written by the player that they have assigned to the up taunt. This feature is disabled in the With Anyone for security and censorship reasons. Each message is limited to 20 characters in length.

The function returns for Super Smash Bros. 4's With Friends mode played over the Nintendo Network. The user is prohibited from including certain inappropriate words, and each message is limited to 16 characters at most.

The custom message feature was taken out in Super Smash Bros. Ultimate in favor of pre-made messages, most likely so they can be translated and shown in every language and prevent any inappropriate words and phrases from slipping past the blacklist. As most taunts are disabled in Quickplay (with Kirby as the exception), taunt messages are only shown at the start of the match and at the results screen. The player can select eight taunt messages, four for use at the start of the match and four for use at the results screen.

A pseudo-taunt is an action that is intended to taunt opponents without using one of the taunts already available in the game. Pseudo-taunts often involve actions that look similar to an ordinary taunt; a well-known example is King Dedede's crouch, though others include Ness's up and down smashes, where he performs yo-yo tricks; Bowser Jr.'s down tilt, where the Junior Clown Car licks the foe with its tongue; Olimar's down tilt, where he appears to be doing "the worm"; Charizard's slow-walking animation, dubbed the "Zard Walk" by fans; Shulk using Monado Arts while walking, dubbed the "Monado Walk" (which applies to Kirby as well when he copies Shulk's neutral special); many characters' crawling animations (with those of Wario and Zero Suit Samus being the most common); and Mr. Game & Watch's up tilt where he waves a "#1" flag.

Within taunt matches, actions that produce loud, irritating, or otherwise repetitive sounds can become pseudo-taunts; examples include crouching as Jigglypuff and Kirby, Daisy's forward smash, Ganondorf's up smash prior to Ultimate (and his forward smash in Ultimate), Captain Falcon's Falcon Punch, the majority of Wario's moves (especially Wario Waft), Shulk's Back Slash, Little Mac's neutral attack, Olimar's Pikmin Order, and any of Inkling Boy's tilt attacks, where he can sometimes say "Ngyes!".

Some of Incineroar's attacks will cause it to perform a taunting animation if they successfully connect. These moves are:

Repeatedly crouching and standing back up (i.e. teabagging) is a common form of pseudo-taunting. Ridley and King K. Rool's teabags make them look like they are "dabbing". This also applies to Falco's spot dodge prior to Ultimate. Also with Falco, canceling his down taunt with down smash at the right time will make him say a phrase that phonetically sounds similar to "Hand off my cock!" In Ultimate, teabagging is notoriously common on Quickplay due to taunts being disallowed, and is a widespread criticism of the mode that is considered a form of griefing. As such, players are often advised to mentally and emotionally prepare themselves for opponents who will attempt to aggravate them.

Other examples of pseudo-taunting involve showing off advanced techniques, such as DACUSing or dash dancing.

to make your character taunt. You can trigger different taunts depending on the direction you press."