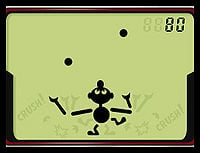 The composite Mr. Game & Watch character debuted in Super Smash Bros. Melee. While some Game & Watch games starred specific characters, such as Mario in Mario's Cement Factory, a majority simply starred nameless, simply-drawn characters. These characters, due to the LCD display of the Game & Watch, could only move in alternating, preset frames, similar to the numbers on a calculator. Also, the animation frames were monochrome, simply being black LCD frames against a preset background.

In translating this era of gaming to Smash, many of these generic characters' animations and abilities were combined into one new entity, Mr. Game & Watch. Visually, Mr. Game & Watch's standard design most heavily resembles the people in need of rescue from Fire and the pedestrians from Manhole. In keeping with the limitations of the Game & Watch's animations, Mr. Game & Watch is rendered as a flat, two-dimensional character with a choppy, frame-by-frame animation style.

Since debuting in Melee, Mr. Game & Watch has made a few appearances in other games. He has a minor speaking role as the host of one of the menus in Game & Watch Gallery 4. He has also made a number of cameos in other Nintendo games, including multiple entries in the WarioWare series, Donkey Kong Country Returns, Rhythm Heaven Fever, and Super Mario Odyssey.

Mr. Game & Watch fights with a variety of items derived from the Game & Watch series. Chef, his neutral special move, launches sausages at random distances from a pan. At closer distances said pan can be used as a semi-spike. Judgment, his side special move, is a hammer with randomly chosen strength and effects, ranging from weak (1) to strong (9). Fire, his up special move, launches Mr. Game & Watch at a lengthy vertical distance, with the help of a firefighter team; note that this is the only up special attack which gets more distance when a character is big by getting a mushroom. Lastly, Oil Panic, his down special move, allows him to catch energy based projectiles. Once three projectiles are caught, the contents can be dumped as a flow of oil, causing damage depending on the projectiles caught. This move can be used to cause the Kamikaze Glitch.

Mr. Game & Watch translated well into Super Smash Bros. Melee. However, this proves to become a severe disadvantage. His movement is choppy and sluggish, thus meaning he becomes dependent on wavedashing and dash-dancing as his primary method of movement. His moves, primarily his special moves, have very limited uses in competitive play and only two of his aerial attacks can be L-canceled. However, the few usable moves he has come equipped with high range and very large hitboxes, many of which are powerful finishers. Aside from his moves, Mr. Game & Watch's throws are very useful due to the fact they can all be used to chain grab. Mr. Game & Watch's defensive game is arguably his worst property; with an extremely small shield (which leaves his hands and feet unprotected, even at maximum size) and a very poor sidestep and roll, he has a very weak defensive game. This, combined with the fact that he is very light, causes him to die at very low percentages. Mr. Game & Watch players must therefore be able to read their opponents ridiculously well in order to simply survive and to have a chance in competitive play.

Mr. Game & Watch
First appearing in 1980, the Game & Watch series is the father of all portable liquid crystal games. The main character is simple and monochrome but has a timeless individuality. There are 39 different games in the series and they've sold over 43 million units worldwide. Pictured at left is the particularly popular Fire model.

Mr. Game & Watch [Smash]
A resident of a totally flat world, Mr. Game & Watch's frame-by-frame movement is distinctive. His image is known far and wide, and respected by gamers everywhere. In Super Smash Bros. Melee, he hurls sausages with his Chef technique. The random strength of his Judgment is determined by the number displayed; food appears on lucky 7.

B: Chef
Smash B: Judgment

B: Chef
Smash B: Judge

Mr. Game & Watch [Smash]
A man of great stature in the world of Nintendo characters, Mr. Game & Watch is a comparatively light fellow and doesn't feature many powerful attacks. When he's in danger of falling, Fire calls out a rescue brigade to send him skyward once more. He can also catch missile weapons with Oil Panic; once he's caught three, he can dump the bucket on his foes.
Up & B: Fire
Down & B: Oil Panic 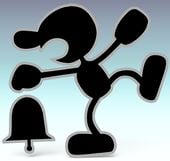 Mr. Game & Watch returns as an unlockable playable character in Super Smash Bros. Brawl. He has been heavily buffed, moving up from the bottom tier of Melee to the mid-high tier in Brawl. Mr. Game & Watch's attacks have been powered up and sped up, and he arguably has the best set of smash attacks in the game. He has been given a new technique, called Bucket Braking, which lets him negate all knockback while in midair. 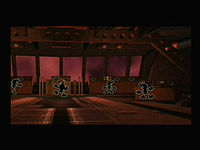 A quintet of false Mr. Game & Watches in the Subspace Emissary

Mr. Game & Watch has been significantly buffed from Melee, as he benefits from Brawl's new physics, along with other various buffs. The introduction of hitstun canceling and momentum canceling helps Mr. Game & Watch more than most characters, as it not only makes him harder to combo but it also significantly improves his endurance mainly due to Bucket Braking. Other new Brawl mechanics such as B-reversing also help him out, and the removal of certain Melee mechanics such as L-canceling affects him less than other characters. His shield game has been improved significantly. His shield is much larger, and his sidestep is no longer one of the worst in the game. Overall, Mr. Game & Watch is a much more effective character than in Melee, although he still struggles against the stronger characters in the game, resulting in him being above average.

Mr. Game & Watch
The monochrome hero of the Game & Watch series, a fellow who oozes personality. First appearing in 1980, the series were the original portable game systems. The first games in the series were quite simple, but as time passed, technology evolved. The multiscreen series featured game play on dual screens. As the name states, the games also kept time. 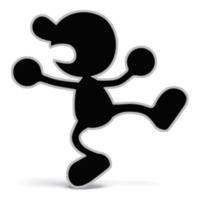 Mr. Game & Watch, as he appears in Super Smash Bros. 4

Mr. Game & Watch is once again an unlockable playable character. He was teased before release in a small appearance at the end of Pac-Man's reveal trailer to illustrate how the two are the oldest characters in Smash Bros. history (even older than Mario and Donkey Kong); in that cameo, he notably performs his down taunt from Brawl, which was replaced by the release of Super Smash Bros. for Nintendo 3DS.

Overall, Mr. Game & Watch was nerfed in the transition to Smash 4. The removal of Bucket Braking is his most notable negative change, as it greatly hinders his ability to survive, considering his status as a lightweight character. Several of his moves also have added ending lag, such as his up tilt, down tilt, and neutral aerial, and some of his moves are weaker finishers, such as his forward aerial. However, his attacks possess high damage output, with some becoming more efficient, including his back aerial's multiple hits linking better, and up smash, which now includes invincibility on startup. His throws have also improved, as they are all now performed much faster, with down throw being especially great at starting combos. However, his nerfs are considerably enough to cause a drop in his tier placement, now ranking 39th out of 55 on the Smash 4 tier list, and he has seen lackluster tournament representation and results.

Game & Watch was first released in 1980, making the series the father of the Game Boy and Nintendo DS. Or maybe an older sibling? Anyway...in Smash Bros., Mr. Game & Watch uses distinct retro moves to damage his foes. However, he's only two dimensional, so he's pretty easy to send flying.

Game & Watch was a series of handheld video games that started in 1980, which pretty much makes Mr. Game & Watch the father of the Game Boy and Nintendo DS. Or maybe an older sibling? Anyway...in Smash Bros., Mr. Game & Watch uses distinct retro moves to damage his foes. However, he only has two dimensions, so he's pretty easy to send flying.

Game & Watch was a series of handheld video games that started in 1980, before even the Game Boy. In this game, you can play as the guy who starred in them, moving about in his quirky, oh-so-retro little way. He can string together some pretty powerful attacks but, unfortunately, being 2D makes him very easy to launch.

Mr. Game & Watch (Alt.)
Mr. Game & Watch's Oil Panic special catches shots and turns them into oil. After catching three, the bucket will be full and you'll be able to throw oil all over your enemies. Some shots, like Samus's fully powered Charge Shot, will fill the bucket in one go! Throwing the oil you get from a shot like that can KO your foes in a flash! 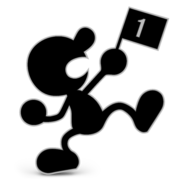 Mr. Game & Watch is once again an unlockable playable character in Super Smash Bros. Ultimate, alongside the entire playable roster of the series. He now changes appearance depending on the game in which the move he is using comes from. His moveset has been significantly altered; for instance, he has a new forward aerial in the form of a bomb projectile, and his up air now functions similarly to Mega Man's. In addition, his Final Smash, Octopus, now carries and drags opponents offscreen.

Having been regarded as a lower mid-tier character in SSB4 (39th out of 55), Mr. Game & Watch has been significantly buffed in his transition to Ultimate. In a similar fashion to Link, Mr. Game & Watch has undergone a massive overhaul in his moveset that goes beyond changes to aesthetic appearances; a majority of his moves have been altered in range, damage, knockback, lag, or have been completely reworked altogether in their purpose and utility. As a result, Mr. Game & Watch has undergone a plethora of buffs and nerfs in his transition to Ultimate, arguably the most out of any other returning veteran. While these changes have weakened his most powerful tools and set-ups from SSB4, they have also greatly improved several of his more underwhelming moves in his toolkit from the previous game. As a result, he is widely agreed to be a high tier or top tier character and his iteration in Ultimate is almost universally agreed to be his best.