Mr. Game & Watch (Mr. ゲーム＆ウォッチ, Mr. Game & Watch) is a character in Super Smash Bros. Melee. He was designed as a composite representation of various generic characters featured in the Game & Watch series, created by Gunpei Yokoi in 1980. He is the last character to be unlocked in the game.

Mr. Game & Watch is currently ranked 19th in Melee's tier list, at the bottom of the C- tier, which is his lowest placement in the series. Mr. Game & Watch's positive attributes include extremely powerful KO moves that have a long duration as well as a slew of moderately effective special moves, two of which (Judgment and Oil Panic) can OHKO. However, Mr. Game & Watch's flaws are due to how he was translated to Melee; he has a bad approach due to his slow overall speed, and outside of his throws, his neutral game is rather predictable. His high hitstun and frailty also make him an easy target for combos. Mr. Game & Watch also has the dubious distinction of being the only character in the game who cannot L-cancel most of his aerial attacks, and is considered to have the worst shield in the game, as it fails to completely cover his entire body after even slight damage. All of this gives him very poor matchups against a majority of the cast, especially against higher-tiered characters.

For players to unlock Mr. Game & Watch, the Classic Mode, Adventure Mode or Target Test has to be cleared with all other characters.

Mr. Game & Watch must then be fought and defeated on Flat Zone.

Mr. Game & Watch's shield, which fails to cover all of his hurtboxes even at full power.

Mr. Game & Watch generally acts as a speedy, weak character; however, he does have some incredibly powerful KO moves, most of which are slow (with the exception of his down tilt). Mr. Game & Watch's attributes tend to be scattered; he has an average falling speed, an above average air speed, an average traction, and the second lightest weight in the game. As a result of these attributes, Mr. Game & Watch has a wavedash that grants decent distance and speed.

Mr. Game & Watch is notable for having unusual properties in most of his attacks; his forward tilt and forward smash, for instance, have sex kick properties, harming others even after the primary hitbox dissipates. Additionally, his up smash and neutral aerial have long hitboxes that do not run out of power, making them good KO options. Additionally, Mr. Game & Watch has many disjointed hitboxes in his attacks (particularly his down smash), giving him deceptively decent range.

Mr. Game & Watch's aerial game is his strongest asset, as his aerials have large disjointed hitboxes, evident with his neutral aerial, often KO'ing opponents under 125%, while having a very large hitbox that covers him. His forward aerial is his best approaching tool as it can be L-canceled and has fast startup, though it has heavy landing lag when not L-canceled. His back aerial is multi-hitting and has a disjointed hitbox, making it somewhat unpredictable to counter. His up aerial is a two-hit attack, with the second hit having high KO power. It can also be used to juggle fast fallers and heavy characters. Lastly, his meteor smashing down aerial is effective at countering foes from below and KO'ing (the sourspot is slightly weaker than the sweetspot and sends foes on a diagonal trajectory). The down aerial's landing hitboxes add 5%-6% more damage, for a total of 19%-20% if the primary hitbox strikes first.

Mr. Game & Watch's specials also allow for significant power; Oil Panic can absorb projectiles and result in a powerful resulting projectile, and his Judgment has near OHKO potential. Mr. Game & Watch also has a rather good recovery from Fire; despite a lack of options and general predictability, it grants him significant vertical distance. The low hitstun and knockback, as well as an unpredictable trajectory gives Chef potential edgeguard capability.

Mr. Game & Watch's grab game is also decent, despite his below-average grab range. The resulting trajectories of his throws gives him solid chaingrab and combo potential, and as all his throws look identical, he can perform mindgames on opponents by challenging the player's perception of where they will end up.

Mr. Game & Watch's main flaw, however, is his awful approach. An awkward dash, mediocre wavedash, and slow, weak tilts on the ground (except for his down tilt) results in him heavily struggling on the ground, causing him to be reliant on dashdancing and foxtrotting to traverse stages. His aerial approach is just as poor; despite an above average falling speed and an average short hop, he has among the worst SHFFLs in the game, primarily due to the fact that his aerials have significant ending lag, and that his neutral, back, and up aerials have the dubious distinction of not having the ability to be L-cancelled due to a programming error that lists them as special moves.

Mr. Game & Watch's defensive game also suffers; despite a relatively small size and a very low crouch, he is very easy to shield stab due to having the smallest max shield in Melee due to a coding error, and his remaining defensive capabilities are poor, with short, slow rolling dodges and an equally short sidestep dodge. Due to his slow tilts and smashes and mostly situational specials, he has poor out of shield options. His recovery also suffers; despite its respectable vertical distance and average horizontal distance, Fire is very predictable and easy to read, inviting edgeguarding or edgehogging.

Mr. Game & Watch also suffers due to his ability to be easily combo'd; his light weight and high periods of hitstun makes him a viable target for combos and juggles, and his light weight also makes him very easy to KO, only making him more vulnerable.

For a gallery of Mr. Game & Watch's hitboxes, see here. 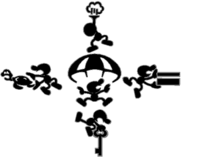 Rather than using pre-existing music, this track is unique to Melee. It features bleeping noises that resemble the sound effects from Game & Watch games.

Mr. Game & Watch has historically been considered to be a poor character in competitive play, with negative traits ranging from poor endurance, susceptibility to chaingrabs and various KO setups (despite his light weight), inconsistent approaching options, lag in his many of his attacks, and the inability to L-cancel some of his aerials. While a small group of smashers discovered that Mr. Game & Watch had potential, such as his raw power and strong punish game that allowed for flashy combos, his flaws and bad matchups have hindered such showings at the highest levels of play. As a result of his flaws, he has consistently remained in the lower ends of tiers, failing to make significant rises.

In recent years, however, Qerb has been noticeably successful with him, placing well in many major tournament series such as Super Smash Con as the sole representative of his character. Qerb achieved an honorable mention in the 2019 MPGR, indicating that he was considered close to Top 100 level even with a low-tiered character. Since many of the characters around Mr. Game & Watch on the tier list, such as Link and Donkey Kong, do not have many comparisons to contend with Qerb's level of results, some argue that he deserves to be placed slightly higher than his current rank. Other players such as Mew2King disagree, believing that his theoretical potential and matchup spread are still much worse than those characters. As it stands, however, he is generally agreed to be a low-tiered character who still possesses significant difficulty contending against many matchups. With a noticeable rise in Game & Watch players, as well as his metagame still being developed, he currently ranks 19th in the current tier list.

See also: Category:Mr. Game & Watch professionals (SSBM)
Any number following the Smasher name indicates placement on the 2019 MPGR, which recognizes the official top 100 players in the world in Super Smash Bros. Melee. "HM" indicates an honorable mention on the 2019 MPGR.

Mr. Game & Watch can appear as an ally in the team battle and the giant battle. However, he only appears as an opponent in the multi-character battle, where he is fought on Flat Zone.

Adventure Mode makes no concessions to Mr. Game & Watch when he is unlocked.

In All-Star Mode, Mr. Game & Watch appears as the final character the player fights against; his battle is the only one guaranteed to occur at the end, and he does not ally with any other character. The player must fight against a team of twenty-five Mr. Game & Watches, five at a time, on Flat Zone. Defeating all of them allows the player to complete the mode.

In addition to the normal trophy about Mr. Game & Watch as a character, there are two trophies about him as a fighter that are unlocked by completing the Adventure and All-Star modes on any difficulty with Mr. Game & Watch.

Mr. Game & Watch
First appearing in 1980, the Game & Watch series is the father of all portable liquid crystal games. The main character is simple and monochrome but has a timeless individuality. There are 39 different games in the series and they've sold over 43 million units worldwide. Pictured at left is the particularly popular Fire model.

Mr. Game & Watch [Smash]
A resident of a totally flat world, Mr. Game & Watch's frame-by-frame movement is distinctive. His image is known far and wide, and respected by gamers everywhere. In Super Smash Bros. Melee, he hurls sausages with his Chef technique. The random strength of his Judgment is determined by the number displayed; food appears on lucky 7.

B: Chef
Smash B: Judgment

B: Chef
Smash B: Judge

Mr. Game & Watch [Smash]
A man of great stature in the world of Nintendo characters, Mr. Game & Watch is a comparatively light fellow and doesn't feature many powerful attacks. When he's in danger of falling, Fire calls out a rescue brigade to send him skyward once more. He can also catch missile weapons with Oil Panic; once he's caught three, he can dump the bucket on his foes.
Up & B: Fire
Down & B: Oil Panic