This article is about the item which originated in Donkey Kong. For other uses, see Hammer (disambiguation).

The Hammer (ハンマー, Hammer) is a close-range item that appears in all Super Smash Bros. games. Upon being grabbed by any player, it sends them into a unique state that inflicts significant damage and knockback. 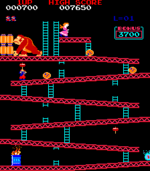 Contrary to its depiction in the Super Smash Bros. series, the Hammer's head cannot fall off in the game, nor can it otherwise malfunction.

Bowser swings the Hammer in Super Smash Bros. for Wii U.

Upon picking up the Hammer, characters enter a unique state for eight seconds; they will constantly swing the hammer back and forth, and will be unable to midair jump, use any other attacks, or defend. The Hammer also cannot be manually dropped unless the user has been sent into a state of tumbling. The Hammer deals about 22% per hit, and it also deals extremely high vertical knockback, potentially KOing opponents at low percentages; the effects of the Hammer are even more formidable in Super Smash Bros., where the Hammer instead does 30% damage with even more knockback. The Hammer can also "chain" into itself, doing 60% and likely KOing the opponent. The Hammer disappears after seven seconds.

The Hammer, however, limits the user's options, and particularly careful hitbox placement by other characters can potentially interrupt the wielder. Counters are especially powerful against Hammers since most of them deal more damage for any attack they counter. As the wielder of the hammer cannot use special moves or midair jump, sending an opponent off a ledge while they swing the Hammer can effectively KO them unless they can somehow drop the Hammer. In Super Smash Bros. Brawl and Super Smash Bros. 4, the Hammer also operates on a "timer"; if a character wielding the Hammer is constantly hit so that they cannot swing the item, the timer will still count down, potentially getting rid of the Hammer before they can properly use it.

The Hammer is also an item in Smash Tour: when its trophy is selected, the user starts the battle wielding a Hammer. 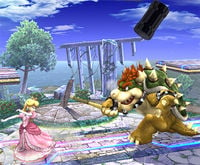 A Headless Hammer in action.

Starting in Melee, there is a 12.5% chance (one out of eight) of the head of the Hammer falling off as it is picked up, after which the item becomes functionally useless, though the wielder will continue to swing the handle for as long as they would with a normal hammer. The Hammer Head itself can be picked up and thrown as a powerful item.

If the Hammer Head falls off, then the player is rewarded with the Headless Hammer bonus, worth 2500 points. This bonus only appears in Melee.

Hammer
If you grab the Hammer, you'll run across the screen swinging it back and forth nonstop. In Donkey Kong, Mario used the Hammer in exactly the same fashion. It's an extremely powerful item, but you have no recovery move when carrying it. Every now and then, the mallet head will fall off, and you'll end up completely vulnerable, swinging just the handle.

An item that, once grabbed, makes you swing nonstop. It's a powerful attack item that does terrific damage and sends opponents sailing. Once in a great while, the hammer's head will fall off, leaving you nothing but the handle. Of course, you can't tell whether the head is securely fastened just by looking. Hammerheads that fall off can be picked up and thrown as weapons.

An item that, once grabbed, makes you swing non-stop. It's a powerful attack item that does terrific damage and sends opponents sailing. Once in a great while, the hammer's head will fall off, leaving you nothing but the handle. Of course, you can't tell whether the head is securely fastened just by looking. Hammerheads that fall off can be picked up and thrown as weapons.

Hammer's trophy in Super Smash Bros. for Wii U

Once you grab this hammer, you can't help but keep swinging and swinging. Who needs special moves when you've got a hammer? And forget your second jump—use that time to deliver a second lump! Oh, but the hammerhead isn't attached very well, so watch out if it pops off or something...

This is something you just can't stop swinging. At all. You'll do a lot of damage with it, but...you won't be able to jump in mid-air or use special moves, so if you fall off the stage, good luck getting back on! Oh, and if the head pops off, you'll be left waving the handle around. If that happens... man, you are going to look ridiculous.

Hammer Head's trophy in Super Smash Bros. for Wii U

A hammer is just a stick until you add the top. That's where this item comes into play. Sometimes, however, the top comes off. If that happens, just grab this loose part and throw it at your enemies. For some poetic justice, make the guy swinging the hammer handle your first target.

: Super Smash Bros. for Wii U

If the head of a hammer should happen to fall off while someone's waving it around, don't let it go to waste! It's great for launching people, so pick it up and throw it at someone! How about that wally waving the hammer handle around? He's just asking for it!

: Super Smash Bros. for Wii U