This article is about the item that uses a tractor beam. For the Galaxian flagship that appears in Pac-Man's moveset, see Bonus Fruit.

Boss Galaga (ボス・ギャラガ, Boss Galaga) are the strongest of the main enemies in the Galaga series by Namco. 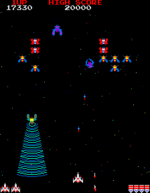 Boss Galaga as it appears in Galaga.

In Galaga, Boss Galagas appear as one of the common enemies of normal stages. They attack by flying down and firing their tractor beam at the player: if they hit they capture the player's ship, flying back up to the swarm with it and causing the player to lose a life. During the procedure, the same sounds heard in SSB4 and SSBU are played. If the Boss Galaga with the ship is defeated while flying at the player, the captured ship will join up with the player's current ship, doubling their firepower. Like in SSB4 and SSBU the Boss Galaga takes two hits to defeat: it turns purple when hit once and it explodes when hit twice.

A Boss Galaga attacking Fox in the Wii U version.

The Boss Galaga appears as an item, and is one of the two items introduced in Smash 4 (the other being the Beetle) that can potentially KO opponents by sending them up to the upper blast line. When thrown, Boss Galaga will fly to the top of the screen (dealing a small amount of damage to anyone it collides with), then fly in formation as it did in its home series. After such, it will dive down and home in on the targeted player's last known position and fire its tractor beam. If it misses, it will fly offscreen and do nothing, but a character caught by its tractor beam will turn red and be taken to the top of the screen and over the upper blast line while 8-bit sound effects from the original Galaga plays: this can be avoided by mashing buttons to escape. The tractor beam can only catch fighters a few moments after being fired; anyone near the beam after that will not be affected.

A Boss Galaga can take damage while it lies on the ground, while being held, as it hovers in mid-air and while it fires its tractor beam: after the first hit it turns blue and purple, and after the second it is destroyed in a flurry of purple pixels. Similarly to the Beetle, it is incredibly difficult to escape from the Boss Galaga's grasp if the victim is at 50% or higher, though it is possible to shake out at low percents. It's possible for a Boss Galaga to remain in place with a captured fighter if a solid ceiling or something similar blocks its path, which gives the victim time to escape or after a while, will cause the Boss Galaga to release them.

Boss Galagas will disappear if thrown above the upper blast line.

The Boss Galaga appears as a blue item: when selected, the opponents' positions on the map will be randomly swapped.

A "Boss Galaga Smash" is one of the possible battle types: in it, only Boss Galagas appear as items.

Boss Galaga's trophy in Super Smash Bros. for Wii U

A boss enemy from Galaga. When thrown, it will spiral skyward and hang out for a time and then descend and pull in fighters with a tractor beam. If you get caught, try to escape by wiggling around as best you can. Unfortunately, there is no bonus fighter for defeating this enemy...
Arcade: Galaga (1981)

A boss enemy from Galaga. When thrown, it spirals into the air and drifts for a while before descending on a fighter and using a tractor beam to pull them up. If the beam touches you, you'll be captured and carried off, so all you can do is wiggle around and try to escape! Defeating the Boss Galaga won't net you another fighter. Sorry!

The Boss Galaga keeps its function from SSB4. Additionally, when a character gets caught the background of the stage changes into a spacescape reminiscent of the original Galaga game. It always carries the player into a Star KO, except on stages that don't allow Star KOs. The Boss Galaga will remain alongside the Star KO'd player in the background as they fly off and disappear. In addition, the Star KO'd opponent will have a sideways tumble animation identical to the Star KOs in the first four Smash games. It cannot be spawned on Princess Peach's Castle, Kongo Falls, Green Greens, Onett, WarioWare, Inc., Frigate Orpheon, Lylat Cruise, New Pork City, Mario Bros., Prism Tower, Tortimer Island, Coliseum, Town and City, Boxing Ring, Moray Towers, Mementos, and King of Fighters Stadium, despite those stages having star KOs.

In Adventure Mode: World of Light, Boss Galaga is presumably one of the countless spirits captured by Galeem during his takeover of the universe. After Galeem's defeat, Dharkon takes control of Galeem's spirits, including Boss Galaga. Boss Galaga's spirit is located in the Mysterious Dimension sub-dungeon of The Dark Realm.

Boss Galaga can be summoned using the cores of Swooping Snitchbug and Bandit.