Tacs (タック, Tac) are cat-like ninja-dressed enemies from the Kirby series that act as the only source of the "Copy" Ability in the games. 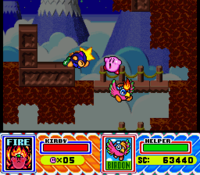 Tac as it appears in Kirby Super Star.

Tac appears in the Kirby series as an enemy in Kirby Super Star and its remake Kirby Super Star Ultra. In the game, Tac has the unique ability to steal either the Copy Ability that Kirby currently has or his partner character: Kirby has to defeat the Tac to get them back. If Tac is swallowed by Kirby, he is able to gain the unusual ability of Copy, which allows him to copy the abilities of enemies in front of him much like his basic Inhale abilities: this is mostly useful in the Milky Way Wishes mode, where Kirby can't copy abilities by inhaling, and against enemies that can't be inhaled like Scarfy. In addition, like most other Copy Abilities, Kirby can sacrifice the ability to summon Tac as an ally; this Tac transforms into other partners based on abilities it steals, and can revert to its original form at will, effectively acting as a second Kirby.

A Tac (left) in Smash Run, about to attack Donkey Kong.

A Tac with his bag full of stolen power-ups.

Tacs appear as enemies. They attack by throwing a large hand which deals no damage, but steals power-ups from the player. After a successful theft they quickly run away, occasionally stopping to look around. Defeating them makes them drop their loot, but if they run off the screen it will be permanently lost. 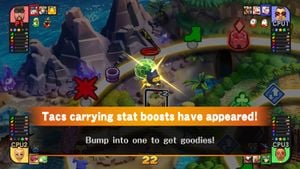 Tacs appear as a random event. Three Tacs carrying powerups roam around the board, picking up any stat bonuses along the way, and players who bump into them will defeat them thus gaining their loot.

The Tac trophy appears in both versions of the game, it is obtained by collecting all the CDs.

Tac's trophy in Super Smash Bros. for Wii U

This zippy character appears in the Kirby series. In Smash Bros., he'll appear in Smash Run to try to steal your stat boosts from you. How much he steals depends on how much you've improved your stats. If you can catch him, you can get back whatever he stole. Don't give up!

This speedy little guy is from the Kirby series. In those games, he steals the ability Kirby's using and bolts. If you want it back, you have to chase him down and take it. In Smash Tour, they'll randomly appear on the board. You'll be rewarded with multiple stat boosts if you're quick enough to catch one!

This speedy little guy appears in the Kirby series. In this game, he'll speed up to you, steal your stat boosts, then flee. How much he'll steal depends on your stats. He's hard to catch, but if you take him out, you can get your stat boosts back, so you'd better chase after him!

This speedy little guy is from the Kirby series. In those games, he steals the ability Kirby's in the middle of using and bolts. If you want it back, you have to chase him down and take it. In Smash Tour, Tacs appear randomly on the board, and you'll be rewarded with multiple stat boosts if you're quick enough to catch one!