The Yellow Devil (イエローデビル, Yellow Devil) is a boss hailing from the Mega Man series. It is a gigantic robot, the first combat robot created by Dr. Wily, originally appearing as a fortress boss in the first Mega Man game. 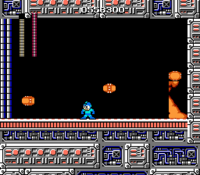 The Yellow Devil using its splitting attack in Mega Man.

The Yellow Devil originally appeared in Mega Man, where it served as the stage boss for the first stage of that game's Wily Fortress. It is made of a shape-memory alloy originally created by Dr. Light which was stolen by Wily during the events of the first game, although the control chip acting as its eye, allowing it to break apart and reform into its humanoid form, was unfinished rendering the Yellow Devil unable to move. It used attack patterns similar to its appearance in Smash 4, splitting into multiple parts and moving across to the other side of the stage. The Yellow Devil is notably a hard boss in the Mega Man series since the split parts of it make it hard to dodge and predict, and that it will repeatedly split again after opening its eye (its weak point) to fire a beam at the player. The Yellow Devil's weakness was the Thunder Beam, which was obtained by defeating Elec Man.

The Yellow Devil reappeared in the remake of the first game, Mega Man Powered Up, where it spoke in its own language comprised of the word "Bumo". The playable Robot Masters also make an attempt to communicate with it; Ice Man appears to understand it but says that even though the Yellow Devil has a mission, he has his own mission, too. Cut Man and Oil Man (a character exclusive to the remake) both insult it by copying its language, although Oil Man intentionally does so while Cut Man was trying to appease it. Bomb Man however demands that the Devil speak in a language that he can understand. While playing as Proto Man, he instead threatens the Devil that one shot at him will blow up his nuclear reactor, vaporizing the entire fortress. Here, it was weak to Fire Storm, which was obtained by defeating Fire Man.

Some of his other appearances include Mega Man: The Power Battle, Mega Man 2: The Power Fighters, Mega Man: Battle and Chase, and other spinoffs and remakes.

The Yellow Devil's splitting attack in Super Smash Bros. for Wii U.

The Yellow Devil appears in both versions of Wily Castle. It attacks players by shooting lasers out of its eye and splitting into sections and moving to the other side of the stage, mimicking its behavior in the original game. It can be damaged by attacking its eye, and once defeated, it causes a large damaging explosion, similar to the Smart Bomb. The player who lands the finishing blow on the Yellow Devil is not harmed by the explosion, and any KOs caused by it will count as their attack.

The Yellow Devil appears as a random event: bumping into it will initiate a battle against it in Wily Castle. If not defeated in time it transports to another spot in the map, but it retains any prior damage.

The Yellow Devil trophy appears in both versions. In Super Smash Bros. for Wii U it is part of the Mega Man Trophy Box.

Yellow Devil's trophy in Super Smash Bros. for Wii U

This massive baddy splits itself into small pieces and flies across the battlefield, striking anyone in the way. Deal damage to it by attacking the eye, or hide behind its body to avoid your foes. Be careful—whoever deals the final blow triggers an enemy-launching explosion!

This towering foe splits himself into small bits to move across the stage and wreak havoc. If you can get behind him, you can use him as a shield and also hit his eye more easily. Hit his eye enough and he'll explode! Try to get your opponents caught in the explosion to do some real damage!

Due to Wily Castle returning, the Yellow Devil returns as a stage boss in Super Smash Bros. Ultimate.

Yellow Devil also appears as an Ace-class primary spirit. It can be summoned using the cores of Waddle Doo and Diskun.