Palkia (パルキア, Palkia) is a creature from the Pokémon series.

Palkia is a Water/Dragon-type Legendary Pokémon and the version mascot of Pokémon Pearl and its remake Pokémon Shining Pearl. Palkia is categorized within the Pokédex at #484 as the "Spatial Pokémon". It has the ability to control and distort space, and it is treated as a deity in Sinnoh's lore. In Pokémon Pearl, Team Galactic attempts to use its power to recreate the universe with Cyrus as a ruler. After defeating Cyrus at Spear Pillar, the player has a chance to battle and catch Palkia. In Pokemon Legends Arceus, Palkia can transform into its Origin Form using the Lustrous Globe.

Spacial Rend is a special Dragon-type move with 100 base power, 95% accuracy and an increased chance of dealing a critical hit. Spacial Rend is Palkia's signature move, and thus Palkia is the only Pokémon able to learn it naturally. 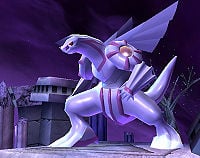 Palkia on Spear Pillar in Brawl.

Palkia is one of three Legendary Pokémon that can appear and cause battle effects on the Spear Pillar stage, alongside Dialga and Cresselia. When the stage has a pink tint, Palkia is the Pokémon for the match. Palkia can cause several different effects on the battle:

Palkia
A Spatial Pokémon. In the Sinnoh region, this Pokémon has been revered for many generations, much like Dialga. Dialga warps time, but Palkia has control over space. It lives between parallel dimensions and is known for its power, rumored to be able to warp space. It can use Spacial Rend to rip through the very space an enemy resides in, damaging the foe at the same time.

A stage turned upside down.

Palkia can appear from Poké Balls and Master Balls. When summoned, Palkia uses its signature move Spacial Rend, temporarily turning the camera upside down. It disappears after a short time, returning the camera to normal. Opponents who touch Palkia take 10% damage and low knockback.

Palkia's trophy can be obtained in both versions. In Super Smash Bros. for Wii U it is part of the Legend of Pokémon Diamond & Pokémon Pearl Trophy Box.

Palkia's trophy in Super Smash Bros. for Wii U

Stories surround this Legendary Water/Dragon-type Pokémon, saying that it has control over all of space. Its Spacial Rend attack will tear space and flip the screen upside down. When this happens, the directional controls of all the fighters will become flipped as well.

Stories of this Legendary Pokémon say that Palkia is a god that controls all of space. When it uses its Spacial Rend attack in Super Smash Bros., it causes the screen to flip upside down. If that wasn't confusing enough, the controls in all four directions end up reversed, too!

Palkia on Spear Pillar in Ultimate.

Palkia reprises its role as a stage hazard on the returning Spear Pillar stage. Spear Pillar now allows for any of the three Legendary Pokémon to appear each time, rather than being set for the whole match.

Palkia returns as a Poké Ball and Master Ball Pokémon, with the same behavior as Smash 4.

Palkia's Spacial Rend will not be able to flip the stage upside down if a fighter is equipped with a spirit with Screen-Flip Immunity, though it will still remain on stage to damage any opponents who touch it.