Ho-Oh (ホウオウ, Houou) is a creature from the Pokémon series. 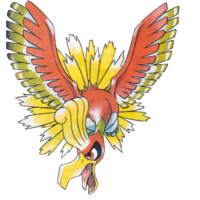 Ho-Oh was first teased in the first episode of the Pokémon anime, Pokémon - I Choose You! where it was seen flying over Ash Ketchum after he was tormented by Spearow; the episode was released three years before Gold and Silver came out. Ho-Oh is a Fire/Flying-type Legendary Pokémon and the version mascot of Pokémon Gold and Pokémon HeartGold. Ho-Oh is categorized within the Pokédex at #250 as the "Rainbow Pokémon".

Sacred Fire is a Physical Fire-type move with 100 base power, 95% accuracy and a 50% chance to inflict the Burn status on the target. It was originally Ho-Oh's signature move, meaning it was the only one that could learn it naturally before Generation VI, when it was also added to Entei's movepool. In terms of stats, Ho-Oh has high Special Defense and Attack, but only has average Speed and Defense. 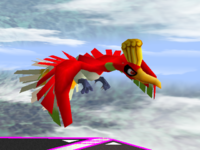 Ho-Oh is treated as a "legendary" Poké Ball Pokémon; its chance of appearing is much rarer than most of the others, and in return, its effect is more powerful. Ho-Oh uses its signature move from the RPGs, Sacred Fire. Ho-Oh will fly up into the air and to the back of the screen when it's summoned. Once Ho-Oh starts flying upwards, any character other than the summoner that makes contact with it will take 13% damage and decent knockback. Ho-Oh will then release a large column of fire. Characters other than the summoner that are caught in the column of fire take a staggering amount of damage (up to 91%), and it is quite difficult to escape from it.

The attack occurs a full seven seconds after Ho-Oh's release, making it the longest delay for a Pokémon attack. Ho-Oh covers a very large attack area, although the heavy delay and predictability of the attack's location (it always appears where Ho-Oh was released) make it relatively easy to avoid, although the summoner can try to make sure that their opponents will be in that particular spot when the attack actually occurs. It has next to no knockback and is not able to KO, while Ho-Oh's body only KOs at very high percents (around 200%).

Ho-Oh appears as a collectible trophy, unlocked as one of the trophies that can be collected randomly in the Trophy Lottery, though it only appears once all characters have been unlocked. It uses the capitalization "Ho-oh", as the "Ho-Oh" capitalization didn't appear until Generation III. 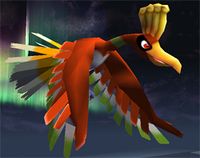 Ho-Oh returns in Brawl, receiving a slight buff and a slight nerf with respect to its Melee version. It once again uses Sacred Fire, but the pillar of fire is much larger and can interfere with vision. A character who touches the pillar of fire will be sucked down into its the center: this means that if Ho-Oh is released from its Poké Ball at the very edge of a stage anyone who touches the fire pillar will be sucked down and subsequently meteor smashed with OHKO potential. It also deals decent knockback at the end of the move, however, just like Melee, it still cannot KO. If almost all hits chain it will deal 81% damage (down from 91% in Melee). Contact with Ho-Oh's body still inflicts 13% damage but has slightly more knockback and is completely vertical, but it still doesn't KO until around 170%; it is more likely to continue flying into the opponent and KO them that way.

Ho-Oh
A Rainbow Pokémon. On sparkling wings of seven colors, Ho-Oh leaves a rainbow behind as it flies. Legend says that Ho-Oh suppressed a war that scorched the land in ancient times. Its attack Sacred Fire can melt ice in an instant and also damage the target with burns. Ho-Oh will show its solemn figure only for the most righteous Trainers. 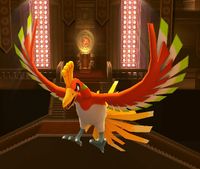 Ho-Oh in Super Smash Bros. for Wii U.

Ho-Oh no longer appears as a Poké Ball Pokémon and instead appears as a stage element in the Kalos Pokémon League stage, as the legendary Pokémon that rarely appears in the Blazing Chamber. It makes the flames supporting the platforms flare up with higher intensity.

Ho-Oh's trophy in Super Smash Bros. for Wii U

This Pokémon flies through the skies on rainbow-colored wings and is said to promise eternal happiness to all who see it. Supposedly, it appears every once in a while in the Fire-type Elite Four Trainer's room in the Kalos Pokémon League stage. Its screams cause pillars of fire to rise all the way to the ceiling.

This Pokémon flies through the skies, trailing rainbows from its wings, and is said to promise eternal happiness to all who see it. Supposedly, it appears every once in a while in the Fire-type Elite Four Trainer's room in the Kalos Pokémon League stage. Its screams cause pillars of fire to rise all the way to the ceiling.

Ho-Oh as a Kalos Pokémon League stage hazard in Ultimate.

Ho-Oh returns as a stage element on the stage Kalos Pokémon League, acting as it did before.

Ho-Oh also appears as a Legend-class support spirit. It can be summoned using the cores of Raikou, Entei, & Suicune, a Grab type, a Neutral Type, and two support types.

In Adventure Mode: World of Light, Ho-Oh is presumably one of the countless spirits captured by Galeem during his takeover of the universe. Ho-Oh's spirit is located in the Molten Fortress sub-dungeon of The Light Realm. Ho-Oh is needed to create a rainbow in the cloud section.