Unown (アンノーン, Unknown) is a creature in the Pokémon media franchise. Its name is a corruption of the word Unknown. 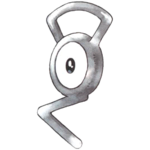 Unown is a Psychic-type Pokémon introduced in Generation II, where it only appeared in the underground area of the Ruins of Alph after solving some stone puzzles, and is categorized within the Pokédex at #201 as the "Symbol Pokémon". It can appear in 28 functionally identical forms, 26 based on the letters of the English alphabet and the last, rarer two, introduced in Generation III, on the question and exclamation marks. It is very weak and can learn only the move Hidden Power. Contrary to its depiction in Melee, Unown cannot learn Take Down in any game. 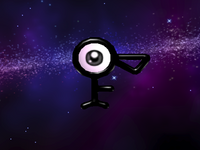 An Unown F in Melee.

The Unown make their first appearance in Melee and appear out of Poké Balls. Unown's attack is Take Down, and functions similarly to Beedrill's attack in Super Smash Bros. When Unown is summoned, a random letter of Unown flies off the screen. This particular Unown will hit opponents with moderate knockback; the slash attack is more profound and can even KO. A group of Unown will then begin flying from one side of the screen to the opposite side diagonally. Any character that makes contact with the swarm of Unowns will take damage. The character that made contact with the Unowns will also be forced to the top of the screen. The character even has a chance of getting KO'd at low percentages. Unown's attack does not harm the summoner. 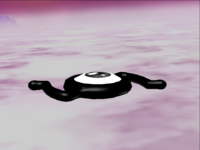 In the stage Poké Floats, various Unown fly past at moderately high speed. They act as platforms and the players can fall through them. They travel in different directions.

All 26 varieties of Unown which existed at the time feature together as a collectible trophy, unlocked by amassing a combined total of over 5,000m (16,503ft) with all the characters in the Home-Run Contest.

Unown does not return as a Poké Ball Pokémon, though it is a spirit, appearing in its F form.