This article is about the Pokémon. For the smasher, see Smasher:Rayquaza07.

Rayquaza (レックウザ, Rayquaza), stylized as RAYQUAZA in European versions of Brawl, is a draconic creature from the Pokémon media franchise.

Rayquaza is a dual Dragon/Flying-type legendary Pokémon that debuted in the third generation of Pokémon games, serving as the version mascot for Pokémon Emerald, the solitary third version of Pokémon Ruby and Sapphire and fifth main series game in Generation III overall, and is categorized within the Pokédex at #384 as the "Sky High Pokémon". A green, serpentine creature, it is part of a trio of legendary Pokémon commonly referred to as the weather trio along with Groudon and Kyogre, and in its games is able to mediate the fights between those two. It is considered very territorial and usually flies around in the ozone layer.

Rayquaza first appeared in Pokémon Ruby and Sapphire as a legendary Pokémon residing in Sky Pillar. However, it did not have much of a role in these games. In Pokémon Emerald, Rayquaza is the mascot and served a much bigger role, becoming the one who stops the fight between Kyogre and Groudon. It also stays in Sky Pillar once the conflict is finished and can be obtained much earlier. Rayquaza later returned in the remakes, Pokémon Omega Ruby and Alpha Sapphire, playing a major role in the post-game and also capable of Mega Evolution, which can be accessed by the move Dragon Ascent. 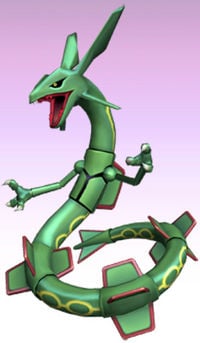 Rayquaza is the second boss in The Subspace Emissary in Brawl. In the mode, Rayquaza first appears in the level The Lake after Diddy Kong goes to investigate a crashed Arwing. Seeing Diddy and the Arwing's pilot as intruders of its territory, Rayquaza bursts out of the water, destroys the Arwing with a ball of energy from its mouth, and then grabs Diddy. Before it can retreat into the water, Fox leaps from the burning Arwing and attacks Rayquaza using Fox Illusion, causing it to lose its grip on Diddy Kong. The beast attacks Fox with the energy ball attack again, but Fox reflects the attack back at Rayquaza using his Reflector, sending it tumbling back into the water. Both Diddy and Fox face off against the dangerous legendary Pokémon.

Even though it wasn't working for the Subspace army, Tabuu brings back Rayquaza to slow down the heroes in The Great Maze.

Also, when Rayquaza is defeated, it twitches at the last second, which probably means it was only knocked out (a possible throwback to the Pokémon series, where a Pokémon who is defeated in battle is said to have fainted).

It can also be battled at any given time in Boss Battles Mode.

Rayquaza fighting against Diddy Kong and Fox in The Lake

While Rayquaza technically has less health than later bosses, its massive battery of resistances practically gives Rayquaza a very large amount of health. In fact, the only moves which it does not resist are those with freezing hitboxes, which is a nod to the Pokémon games where Rayquaza's typing makes it weakest to Ice-type moves. However with there being only a few moves in the game with hitboxes of the freezing type, only possessed by the Ice Climbers, Lucas, and Mr. Game & Watch, this lone relative weakness can rarely be exploited. Even then most of those few freezing moves are projectiles, meaning Rayquaza will still resist them, while also being low-damaging and laggy moves that would make them ineffective for using against bosses. With this inability to use moves that Rayquaza doesn't possess an at least x0.7 resistance to, it is effectively about as or even more durable than Duon, the most durable boss outside of Tabuu.

None of Rayquaza's hurtboxes are programmed to be a weak point, though interestingly it has weak point numbers programmed in that are not the default ×2.0 like they are for other enemies that lack a weak point. This may indicate that Rayquaza originally had a weak point to counterbalance its massive resistances, that was scrapped late in development.

Like all bosses in Brawl, Rayquaza gains an additional ×0.6 damage resistance modifier when fought in co-op mode, effectively gaining 67% more health. This modifier is applied whenever the second player is in-game, and is no longer applied if the second player loses all their stocks.

Rayquaza's trophy must be obtained by using a Trophy Stand on it during its Subspace Emissary fight.

Rayquaza
A Sky High Pokémon. It normally resides high up in the ozone layer where it flies endlessly, so it is rarely seen. However, when Groudon and Kyogre began to fight, it appeared to calm them down. It has the ability Air Lock, which blocks all weather-condition effects. It has exceedingly strong abilities, and its attack power is especially remarkable. 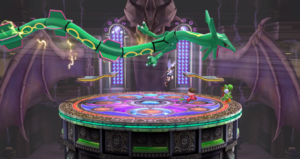 Rayquaza using one of its attacks in the Kalos Pokémon League stage.

Rayquaza appears in the Kalos Pokémon League stage as a stage element. Appearing rarely in the Dragonmark Chamber, it performs its Air Dash move from The Subspace Emissary by flying across the stage at various angles, dealing damage to fighters. Its path is shown briefly by lightning before it appears, giving players time to avoid it.

Rayquaza's trophy is exclusive to Super Smash Bros. for Wii U, where it is part of the Legend of Pokémon Ruby & Pokémon Sapphire Trophy Box.

Rayquaza's trophy in Super Smash Bros. for Wii U

This Dragon/Flying-type Pokémon usually dwells high in the ozone layer, so it can't be seen from the ground. In the Kalos Pokémon League stage, it occasionally flies at great speed through the Elite Four's Dragon-type chamber, where any fighters in its path will be damaged and launched with great force.

This Dragon- and Flying-type Pokémon usually dwells high in the ozone layer, so it can't be seen from the ground. In the Kalos Pokémon League stage, it occasionally flies at great speed through the Elite Four's Dragon-type chamber, where any fighters in its path will be damaged and launched with great force.

Rayquaza returns in its role on Kalos Pokémon League.