Beedrill (スピアー, Spear) is a creature in the Pokémon media franchise. 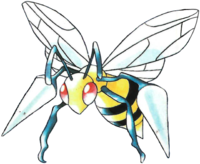 Beedrill is a Bug/Poison-type Pokémon introduced in Generation I. It is listed as #015 in the Pokédex and known as the "Poison Bee Pokémon". Beedrill evolves from Kakuna at level 10, which evolves from Weedle at level 7. As of Pokémon Omega Ruby and Alpha Sapphire, Beedrill is capable of undergoing Mega Evolution.

Take Down is a Normal-type move with 90 base power and 85% accuracy. It also deals 1/4 of the damage inflicted as recoil. Beedrill can learn it via TM09 only in Generation I.

Beedrill did not return in any following game, but Unown attacks in a similar fashion in Super Smash Bros. Melee.