Bellossom is a Grass-type Pokémon introduced in Generation II, but making its debut in the short movie Pikachu's Rescue Adventure. It is categorized within the Pokédex at #182 as the "Flower Pokémon". It evolves from Gloom when exposed to a Sun Stone, and it is the only single-typed Pokémon that evolves from a dual-typed Pokémon.

Sweet Scent is a status move introduced in Generation II which lowers the evasiveness of all opponents by two stages (one stage prior to Generation VI). It is part of Bellossom's starting moveset in every game where they both appear. 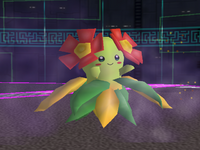 Bellossom debuts as a Poké Ball Pokémon in Melee. It attacks with Sweet Scent: it starts dancing and releasing a cloud of powder, and any opponents making contact with it fall asleep. The victims cannot move until they are attacked or when Bellossom disappears, making this Pokémon ideal for characters who possess slow attacks with large knockback. The more damage an opponent has, the more time they will spend asleep; an opponent with low damage might even wake up only to sleep again if they do not escape fast enough. Bellossom stays on the stage longer compared to other Pokémon.

Bellossom features as a collectible trophy, unlocked as one of the 100+ trophies that can be collected randomly during normal play, such as in the Trophy Lottery and throughout the various Single-player Regular Matches. 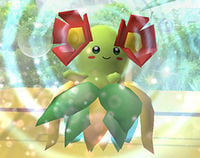 Bellossom as it appears in Super Smash Bros. Brawl.

Bellossom returns using Sweet Scent, as before, although the attack does not last as long as in Melee. It causes minor damage if characters are put to sleep the moment it is summoned.

Bellossom
A Flower Pokémon. After spells of cloudy weather, Bellossom will gather to call out the sun by performing a dance. When exposed long enough to the sun, the leaves on its body will spin around. A Bellossom's Speed is also known to increase with sun exposure. Its main specialty is Grass-type attacks. Also, Bellossom will close its flowers when sleeping.

Bellossom as it appears in Super Smash Bros. for Wii U.

Bellossom makes its third appearance in Super Smash Bros. 4, functionally identical to the way it behaved in Brawl: it can put enemies to sleep if they get too close.

The Bellossom trophy appears in both versions. In Super Smash Bros. for Wii U it is part of the Pokémon Gold & Pokémon Silver Trophy Box.

Bellossom's trophy in Super Smash Bros. for Wii U

A Grass-type Pokémon, Bellossom evolves from Gloom, losing its secondary Poison type. It also gets smaller. It's most common to find Bellossom in tropical climates, grouped together and dancing. In Smash Bros., the Sweet Scent from Bellossom can put even the most hardened fighters to sleep.

Two unusual things happen when Gloom evolves into Bellossom: it gets smaller, and it loses its secondary type, Poison, becoming a purely Grass-type Pokémon. These Pokémon are most commonly found in groups in the tropics. Here, the more damage fighters have taken, the longer Sweet Scent keeps them asleep!

Bellossom as it appears in Super Smash Bros. Ultimate.