This article is about an attack effect in Brawl. For the item in SSB4, see Grass (item). 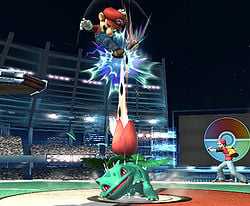 Mario being hit by Ivysaur's Bullet Seed, a grass attack, in Brawl

Due to type effectiveness, grass attacks deal 110% knockback to Squirtle and 90% knockback to Charizard. Aside from being boosted by Grass Attack stickers, this is its only gameplay effect.

Ivysaur is the only character that has grass attacks, other than Kirby copying Ivysaur's Bullet Seed.

Grass is the only major effect to not return in future games. No known attacks in Super Smash Bros. 4 or Super Smash Bros. Ultimate use it; despite Ivysaur being present in the latter, its attacks are generally Normal. It is unknown whether the effect is merely unused, or removed outright.

In The Subspace Emissary, almost all enemies have the same resistance to both slash and grass attacks; Primids are the only exception, taking 1.3× damage from slash attacks but 1.0× from grass attacks.