From SmashWiki, the Super Smash Bros. wiki
(Redirected from Normal (effect))
Jump to navigationJump to search

"Normal" may also refer to one of the five difficulty levels. 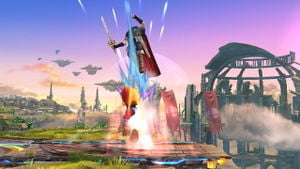 Marth getting hit by Mario's up tilt in SSB4, a normal attack

Kazuya's normal effect is instead a flashy explosion that is taken from the Tekken series.

As the normal effect is the default effect of all hitboxes, and thus used by the majority of attacks, maintaining a list would be futile. Instead, any attacks that are not listed on any other effect pages can be assumed to be normal.