This article is about the character. For the Southern California Smasher, see Smasher:RockMan.

Mega Man (ロックマン, Rockman), also referred to as Mega (ロック, Rock), is a character from the eponymous Mega Man series by Capcom. He was announced as a playable character for Super Smash Bros. 4 in the E3 2013 Nintendo Direct.

Mega Man is a highly advanced robot with a near-human personality created by Dr. Thomas Light. In the year 20XX, Dr. Light and Dr. Albert Wily worked together to create robots with unprecedented artificial intelligence that could be used to supervise other less advanced robots. However, the two later had a falling out over differences of principals, as Dr. Light considered Dr. Wily's experiments unethical and dangerous. This research eventually resulted in a prototype robot known as Proto Man (called Blues in Japan). While a technical achievement, his free-spirited personality programming became an issue when he needed his unstable core fixed. The fear of being tampered with caused him to run away and go into hiding for years. Dr. Light theorized that Proto Man ran away because he desired a companion, so he next designed two robots: Rock, designed as a lab assistant, and Roll, designed for house work.

Based on these successes, Light then built six Robot Masters: Cut Man, Guts Man, Ice Man, Bomb Man, Fire Man, and Elec Man. Once he got wind of this news, Dr. Wily grew jealous of the recognition Light received for their work. Wily then began his designs for world conquest, which involved stealing the Robot Masters and reprogramming them to do his bidding. Seeing Rock and Roll as useless, Wily left them behind, inadvertently creating his ultimate undoing, as Rock would volunteer to be converted into a fighting robot. As Mega Man, he would thwart Wily's plans time and time again.

As Mega Man, Rock possesses the Mega Buster, a weapon that converts his hands into a powerful energy cannon. From Mega Man 4 onwards until Mega Man 9, the Mega Buster can be charged to release a Charge Shot. Beginning in Mega Man 3 and again continuing until Mega Man 9, he also possesses the ability to slide along the ground. Both of these abilities return in Mega Man 11. Mega Man's most impressive ability, however, is his Variable Weapons System, which allows him to copy the powers of Robot Masters he defeats. These weapons then prove useful for taking out smaller enemies or another Robot Master weak to that particular weapon in a rock-paper-scissor style system.

Mega Man is consistently shown to have a strong sense of justice, highly valuing peace. These values were what led him to be converted into a fighting robot in the first place, and the games stress Mega Man's never-ending fight to ensure peace. It should be noted that these values were manually coded by Dr. Light, as he canonically does not have free will beyond the limits of his programming. Mega Man does have his breaking point, though, as seen in Mega Man 7. Tired of his repeated attempts at world domination, Mega Man attempts to kill Dr. Wily, but cannot do so due to his binding to Asimov's laws of robotics. It was this incident that drove Dr. Light to create a more advanced, human-like android that did not adhere to the laws of robotics, resulting in Mega Man's successor, Mega Man X. This news inspires Dr. Wily to do the same, which results in the creation of Zero. The ultimate fate of Mega Man is unclear, however, as there are no traces of his existence by the events of Mega Man X, which takes place a century after the original series.

Mega Man has a large group of allies and companions who help him on his adventures. Dr. Light and Roll often serve in an advisory capacity, while other robots help him more directly. Rush, Mega Man's robotic dog, serves as transportation for him by transforming into tools such as a spring or jet, or by directly merging with Mega Man. Other robot helpers include Eddie, a small robot that distributes items, Beat, a bird robot that attacks enemies and saves Mega Man from falling into pits, and Auto, a robot assistant of Dr. Light that creates parts and upgrades for Mega Man.

After a brief stint of working for Dr. Wily in Mega Man 3, Proto Man occasionally appears to assist Mega Man and give him advice on how to proceed with certain robot masters. Mega Man also has a rival called Bass and his own robotic dog Treble (called Forte and Gospel respectively in Japan). Created by Dr. Wily and initially arch enemies with Mega Man, Bass' villainous tendencies later shifted into more of an anti-heroic role after Wily effectively disregarded him while Zero was in development. 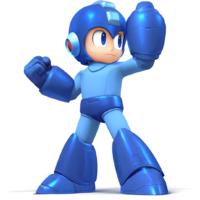 Mega Man as he appears in Super Smash Bros. 4

Mega Man appears as a playable character. He uses special weapons copied from Robot Masters that he fought throughout the original series. Thus, his playstyle is more focused on weapons and range rather than physical combat, in a similar vein to Solid Snake.

Mega Man is placed 27th on the tier list, placing him within the C tier. With his arsenal of projectiles at his disposal, Mega Man is granted a strong spacing game. Some of these projectiles also have useful utility, with Metal Blade being able to be thrown in all 8 directions, Crash Bomber being ideal for pressuring shields, and up aerial having the potential to KO opponents easily at the top blast line. Mega Man also possesses some highly powerful finishers, such as up tilt, down smash, and down aerial, and he also has great air mobility due to his good air speed and high air acceleration. However, being dependent on projectiles leaves Mega Man at a disadvantage against opponents with reflectors (and Villager), and his quick falling speed and high weight give him a vulnerability to vertical hits. Overall, Mega Man's high learning curve has not allowed for much tournament representation, but his results have been impressive thanks to the efforts of players such as ScAtt and Kameme.

Mega Man's trophy in Super Smash Bros. for Wii U

The main hero from Capcom's 1987 action game, Mega Man. He travels from stage to stage, defeating Robot Masters to obtain new weapons. He uses this vast arsenal in Smash Bros. in a variety of ways. Metal Blades, for example, can be fired in eight directions and picked up off the ground!

The main hero from Capcom's 1987 action game Mega Man. He travels from stage to stage, defeating Robot Masters to obtain new weapons. He uses this vast arsenal in Smash Bros. in a variety of ways. Metal Blades, for example, can be fired in eight directions and picked up off the ground!

In 1989, Capcom's new action hero, Mega Man, arrived in Europe! He made his way through levels, defeated bosses and took their weapons. He's got plenty of weapons in this game, too. His Metal Blade, for example, can be thrown in eight directions and goes right through foes! If it sticks in the ground, though, anyone can pick it up.

Mega Man has more than 10 different weapons at his disposal. His forward air attack, Flame Sword, affects a wide area and doesn't leave much of an opening, making it useful in a variety of situations. His Leaf Shield special spins four leaves around him to deflect projectiles or hurt foes. He can also fire the leaves forward.

Mega Man has more than 10 different weapons at his disposal. His front air attack, Flame Sword, affects a wide area and doesn't leave much of an opening, making it useful in a variety of situations. His Leaf Shield special spins four leaves around him to deflect projectiles or hurt foes. He can also fire the leaves forward.

Mega Man has more than ten different weapons at his disposal. His forward air attack, Flame Sword, affects a wide area and doesn't leave much of an opening, making it useful in a variety of situations. His Leaf Shield special spins four leaves around him to block attacks and projectiles. He can also fire the leaves forwards. 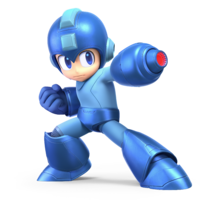 Mega Man as he appears in Super Smash Bros. Ultimate.

Mega Man returns as a playable character alongside the entire playable cast of the series in Super Smash Bros. Ultimate, this time as an unlockable character. His moveset is largely the same, though his Final Smash now features Proto Man and Bass.