Sonic the Hedgehog (ソニック・ザ・ヘッジホッグ, Sonic the Hedgehog) is the titular character of the Sonic the Hedgehog series and the mascot of Sega. After making a cameo in 1991's Rad Mobile[5], Sonic debuted a few months later in his eponymous game. In addition to succeeding Alex Kidd as Sega's mascot, Sonic was also the company's attempt at rivaling Nintendo's mascot, Mario, during the fourth and early sixth generations of video games.[6]

Sonic is a 15-year-old anthropomorphic hedgehog who, as his name suggests, is capable of running at supersonic speeds. He is 3 ft, 3 in (1 m) tall, weighs 77 lbs (35 kg), and has large quills, blue fur, and green eyes. Sonic also wears a pair of Power Sneakers[7] alongside a pair of white gloves.

Before the original Sonic the Hedgehog, Sonic debuted in the arcade racing game Rad Mobile as an ornament hanging on the driver's rearview mirror. Self-described as "The Fastest Thing Alive", Sonic is confident, quick-witted, carefree and virtuous, yet he can also be impulsive, hot-headed, snarky, and cocky. He is also adventurous to the point that he hates being constrained. On a related note, Sonic's love of freedom is a primary reason behind his campaigns to stop subjugation of any kind, most notably the plots concocted by his arch-nemesis, Dr. Ivo "Eggman" Robotnik.

Sonic's most defining feature is his speed, as it was his main gimmick and driving force during his inception. Sonic is constantly seen outrunning traditionally fast objects like cars and trucks, rockets, fighter jets and even time and space itself. This even applies to gameplay, with players often finding ways to glitch and sequence break several games by simply going fast enough. Aside from his speed, his main ability is to curl up into a ball and effectively make himself a projectile that can damage enemies. His most iconic method of achieving this state is the Spin Dash, where Sonic curls up into a ball and spins around in place enough times to launch forward at high speeds. A variant of this technique called the Super Peel-Out exists, which has a similar effect except without curling into a ball. While Sonic initially could only jump and land on the heads of enemies, later games introduced the Homing Attack, where Sonic will lock on to the closest enemy for a near guaranteed hit. Later games also introduced a boosting technique, where Sonic can further increase his speed by using a resource that varies depending on the game.

Sonic gathers golden rings for his primary source of health and energy. If he takes damage, the rings will fly out of him, the amount fluctuating depending on the game, and he has a few seconds to get them back before they disappear. Sonic also collects power-ups such as Power Sneakers that increase his speed further, various elemental shields that let him interact with the level in unique ways and allow him to take a hit without losing rings, invincible boxes that temporarily turn him invincible, several permanent power-ups that let him perform new techniques and access new areas, and wisps that temporarily change Sonic's abilities.

Sonic's most iconic power-ups are the seven Chaos Emeralds, which appear in most games as either collectibles or plot devices. Sonic has been shown to know how to perform Chaos Control, which is using the energy of at least one emerald to warp the fabric of reality, usually resulting in time slowing to a crawl or stopping entirely. If Sonic collects all seven emeralds, he can transform into Super Sonic, which grants him flight and invincibility so long as he has a sufficient number of rings.

Initially, early Western profiles sometimes portrayed Sonic as being from the fictional planet Mobius. However, Japanese profiles (which Western territories would follow starting with Sonic Adventure) and Yuji Naka, the former head of Sonic Team, have since stated that his birthplace is Kiritimati (also known as Christmas Island), one of the numerous atolls that comprise the real world sovereign state of Kiribati.

Although Sonic does not make any sort of appearance in Super Smash Bros., the game's Japanese website included his results from a poll to gauge interest for potential playable characters in a sequel.[8]

Despite Sega and Nintendo being hardware and software rivals at the release of the Nintendo GameCube, Yuji Naka claimed that it was possible to include Sonic in Super Smash Bros. Melee. However, time constraints apparently caused these plans to fall through.[9] It would later be revealed that both Shigeru Miyamoto and Masahiro Sakurai would have approved the idea of adding Sonic to Melee.[10]

An infamous hoax claimed that Sonic and Tails were unlockable in Melee. Despite having been proven as false, the hoax became well-known in both the Super Smash Bros. community and the wider world of gaming. 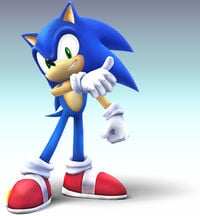 Sonic, as he appears in Super Smash Bros. Brawl.

Sonic's Final Smash, Super Sonic, functions almost identically to its appearances in his home series: he is rendered invincible and can fly, yet his transformation has a fairly short duration.[11] Possibly as a result of his last-minute inclusion, Sonic also appears very late in Brawl's Adventure Mode, The Subspace Emissary. Ultimately, he plays a pivotal role in the defeat of the Subspace Army's leader, Tabuu, during the final battle.

Sonic fittingly possesses the fastest dashing speed in the game, as well as among the fastest walking and air speeds. His blisteringly fast mobility is further accentuated by Spin Dash and Spin Charge, which enable him to blitz an opponent and are integral to his solid combo game. Sonic also possesses an excellent recovery, courtesy of his aforementioned air speed and the considerable distance granted by Spring Jump. However, Sonic's strengths are almost completely offset by his severely unimpressive KO potential, and most of his moveset generally has minimal utility.

Despite his flaws and the general consensus that he lacks truly advantageous and disadvantageous matchups, Sonic has nevertheless managed to achieve decent tournament results, even at the national level. As a result, he is currently ranked 22nd out of 38 on the tier list; this places him in the D tier, and posits him as a mid tier character.

Sonic the Hedgehog's trophy in Brawl

The world's fastest hedgehog, who can run at supersonic speeds. Generally speaking, he loves being able to do what he wants and loathes being constrained. Holding still is something he would never consider. He's got a bit of an attitude but can't pass by someone in trouble. When he collects the seven Chaos Emeralds, he transforms into the mighty, gold Super Sonic.

The world's fastest hedgehog, who can run at supersonic speeds. Generally speaking, he loves being able to do what he wants and loathes being constrained. Holding still is something he would never consider. He's got a bit of an attitude but can't pass by someone in trouble. When he collects the seven Chaos Emeralds, he transforms into the mighty, golden Super Sonic.

: Sonic and the Secret Rings 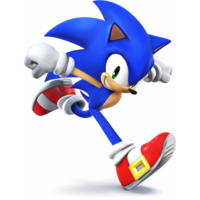 Sonic, as he appears in Super Smash Bros. 4.

Sonic appears as a playable character in Super Smash Bros. 4, with his return being confirmed during a Nintendo Direct on October 1st, 2013.[13] Unlike in Brawl, his design is now based on his appearance as of Sonic Unleashed onwards. This is further reflected by him now being voiced by Roger Craig Smith, who succeeded Jason Griffith in 2010. On a related note, Sonic is now fully voiced in Spanish, French, Italian, and German.

Sonic has been heavily buffed in the transition from Brawl to SSB4. Sonic's previously abysmal KO potential has noticeably improved, and a number of his moves have improved utility. Outside of this, Sonic's outstanding speed and mobility have improved even further, thanks to his air and fast falling speeds becoming noticeably faster. Although Sonic's recovery was slightly weakened and some of his moves, particularly his KOing options, had their lag increased, these nerfs are largely outweighed by his aforementioned buffs.

Thanks to his improvements and consistent tournament success at all levels of play, Sonic is currently ranked 7th out of 55. This places him in the A tier, which ties him with Fox and posits him as a top tier character.

Sonic the Hedgehog's trophy in Super Smash Bros. for Wii U

The main star of the Sonic the Hedgehog series. He's an easygoing hedgehog who blows past the competition with his speed. Seriously, on the ground he's faster than anyone else in Smash Bros. Use this to your advantage, avoiding blows while landing lightning-fast attacks.

The star of the Sonic The Hedgehog series. He's an easygoing hedgehog who blows past the competition with his speed. Seriously, on the ground he's faster than anyone else in Smash Bros. Use this to your advantage, avoiding blows while landing lightning-fast attacks.

A certain hedgehog from a certain series you just might have heard of. Unlike most hedgehogs, he's incredibly fast. Like most hedgehogs, however, he can't swim. He's by far the fastest runner of all the fighters, so take advantage of that by making sure no one gets the chance to hit him. (Just try not to end up in the water.)

Sonic (Alt.)'s trophy in Super Smash Bros. for Wii U

Sonic's up special Spring Jump lets him reach great heights by jumping on a spring, becoming invincible for a moment. He can't use any other specials during the jump, but he can attack or dodge. This move's great for returning from a long launch. Other fighters can use the spring, though!

Sonic's Spring Jump up special lets you bounce to great heights and briefly makes you invincible at the start. You can't use other specials while in the air, but you can use normal attacks, dodge and so on. It's great for getting both back to the stage and out of tough spots, but just remember that everyone else can use the spring too! 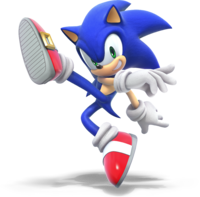 Sonic, as he appears in Super Smash Bros. Ultimate.

Sonic was nerfed slightly overall in the transition from SSB4, with the changes he received demanding a more aggressive playstyle. Most notably, Spin Dash and Spin Charge can no longer cross up shields or be charged indefinitely, with Spin Dash also losing its ability to be shield-canceled. As a result, both moves have become noticeably less effective as both neutral and camping options. Up aerial's angle and knockback adjustments have worsened its hits' consistency when Sonic is ascending, as well as its KO potential. However, it remains a useful combo starter when SHFF'd, thanks to its noticeably lower landing lag and the retention of its excellent auto-cancel window.

Despite these nerfs, Sonic received some noticeable buffs. Homing Attack is faster and more controllable, giving it greater combo potential and neutral utility. Adjustments to Spin Charge's angles, knockback, hitlag and SDI have improved its consistency significantly, while Spring Jump is even more useful for recovering thanks to reverting to its Brawl vertical height. Most of Sonic's standard attacks have also been strengthened or boast greater utility. Sonic has also been indirectly buffed by gameplay changes: he benefits the most of any character from the expansion of dash-canceling's utility because of his unrivaled dashing speed, and the reintroduction of directional air dodging allows him to extend his already impressive recovery.