The Zombie (ゾンビ, Zombie) is a hostile mob found in Minecraft.

Zombies appear as the most common and basic enemies in Minecraft, spawning in groups of 4 in areas with a light level of 0, being commonly found inside unexplored caves for that reason. They spawn only in the Overworld, and have several variants. These include Baby Zombies, which are smaller and faster and can ride a variety of other mobs, although the ability to climb onto other mobs is currently exclusive to the Bedrock version; Zombie Villagers, which can be cured into regular Villagers by the player; Husks, dehydrated zombies that appear in deserts, are immune to sunlight, and inflict hunger on attack; and Drowned, aquatic zombies found in rivers and oceans. A Husk will turn into a regular Zombie if submerged underwater for 30 seconds, and then into a Drowned if it stays submerged for an additional 30 seconds. Additionally, zombies can spawn in a special structure called a Dungeon, which consists of a small room made of mossy cobblestone with a mob spawner and a chest inside.

Zombies can spawn wearing different types of armor and wielding all sorts of tools. Both the armor and the tools can be enchanted. They will burn in the sunlight, unless if they have a helmet equipped, are standing beneath a structure, or are within water. When killed, zombies may drop up to two pieces of rotten flesh, with a chance of rarely dropping one iron ingot, carrot, or potato, as well as any equipment they spawned with. Killing a zombie awards the player 5 natural EXP orbs, with additional 1-3 orbs depending on their naturally-spawned equipment. Baby zombies drop 12 EXP orbs. 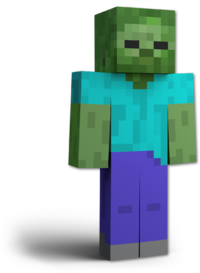 Zombie, as it appears in Super Smash Bros. Ultimate.

In the October 1st, 2020 presentation, Zombie was revealed to be an alternate costume for Steve.

Several zombies appear alongside Creepers as part of House of Boom.

Zombies appear in the background of Minecraft World. They appear during nighttime alongside other monsters, scaring away Villagers, and remain until the sun rises, when they catch fire and burn up.

Zombie also appears as a Novice-class primary spirit in the Minecraft DLC Spirit Board. Zombie is one of the only character-swapping alternate costumes that lacks a fighter spirit, instead appearing solely as a primary spirit. It shares this trait with Enderman.

Zombie uses an army of Steve puppet fighters in the Zombie alternate costume and is fought on the Minecraft World stage's nighttime layout. During the battle, the Zombie Team is equipped with slow super armor, referencing how the Zombies have low speed but can occasionally wear armor. One of the Zombies is also small, referencing Baby Zombie.