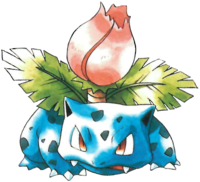 Official artwork of Ivysaur from Pokémon Red and Green Versions.

Ivysaur is a dual Grass/Poison-type Pokémon and the evolved form of Bulbasaur, and is categorized within the Pokédex at #002 as the "Seed Pokémon". Ivysaur appears as a moderately large, teal, quadrupedal frog-like Pokémon. It evolves from Bulbasaur evolves at level 16 onward, and then evolves into Venusaur at level 32 onward.

However, unlike in Pokémon Red, Green, and Blue, Bulbasaur is obtainable alongside its fellow Kanto starters Squirtle and Charmander under special conditions in Pokémon Yellow Version, and relatively early on in Pokémon X and Y.

Unlike Bulbasaur, the bulb on Ivysaur's back has partially bloomed into a pink bud with large green leaves, thanks to exposure from sunlight and apparently from drawing energy from Ivysaur's own body. The budding flower is heavy enough that Ivysaur has difficulty standing on its hind legs, but its four legs and torso grow thick and strong from the weight of the flower, even as a quadruped. Aside from assisting its bud's growth, sunlight also increases Ivysaur's strength.

If Ivysaur starts spending more time lying in the sunlight, it is a sign that the bud will bloom into a large flower soon, which would be heralded by the bud giving off a sweet, pleasant aroma and the species' evolution into its final form, Venusaur.

Ivysaur is briefly mentioned in both Venusaur and Bulbasaur's trophy descriptions. 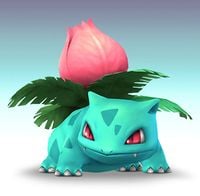 Ivysaur, as it appears in Super Smash Bros. Brawl.

Ivysaur appears as a playable character Super Smash Bros. Brawl. It is one of Pokémon Trainer's three Pokémon, alongside Squirtle and Charizard. Ivysaur can be switched into or out of battle via Pokémon Change, which operates similarly to Transform.

Ivysaur
A Seed Pokémon that is the evolved form of Bulbasaur. It has a flower bulb on its back, the weight of which has made it develop strong legs and hips. If the bud gets too big, the Pokémon can't stand on two legs alone. At a certain level, it evolves into Venusaur. When this happens, the bulb absorbs nutrients and blossoms into a large-petaled flower.

In Super Smash Bros. for Wii U, the Ivysaur trophy is part of the Pokémon Classics Trophy Box.

Ivysaur's trophy in Super Smash Bros. for Wii U

Watching your starter Pokémon evolve is an unforgettable experience. For many trainers, that first happened when Bulbasaur became Ivysaur. It might be difficult to say good-bye to cute little Bulbasaur, but before they know it, they'll be saying bye to Ivysaur, too, as it turns into a fully grown Venusaur!

Watching your starter Pokémon evolve is an unforgettable experience. For many trainers, that first happens when watching Bulbasaur become Ivysaur. It might be difficult for them to say goodbye to cute little Bulbasaur, but before they know it, they'll be saying bye to Ivysaur, too, when it turns into a fully-grown Venusaur! 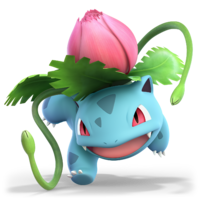 Ivysaur, as it appears in Super Smash Bros. Ultimate.

Ivysaur was previously considered the worst Pokémon in the Pokemon Trainer's party and one of the worst characters in Brawl (especially if judged as a standalone fighter), due to its large amount of significant weaknesses, namely short range on its attacks, notable KO problems due to laggy finishers, a bad aerial game, a terrible recovery, and one of the worst special movesets in the game. Likely as a result of this, Ivysaur has been heavily buffed in its transition to Ultimate and is now considered the best Pokémon in the Trainer's arsenal, gaining notoriety in the community thanks to its up and down aerials.