For other uses of "Sora", see Sora (disambiguation).

Sora (ソラ, Sora) is the main protagonist of the Kingdom Hearts series. Originally a normal boy who sought to venture from the Destiny Islands and explore worlds, Sora embarks on a quest to reunite with his best friends, Kairi and Riku, after their home world was consumed by darkness.

During his quest, Sora obtains a mysterious weapon known as a Keyblade, allies with Goofy and Donald Duck to journey to various worlds in order to help each other reunite with their respective allies, and unravels the mysteries of both the Keyblade and the darkness that consumed the Destiny Islands and numerous other worlds.

Sora debuted in the Super Smash Bros. series as a playable character as the seventh and final character of Fighters Pass Vol. 2.

Hailing from the Destiny Islands, a group of small tropical islands, Sora was born and immediately made contact with an unconscious Ventus, whose heart was fractured in an attempt to separate the dark part of his heart from him. Offering to tether their hearts together to save Ventus, Sora was able to rescue Ventus, but in return caused the dark part of Ventus, Vanitas, to bear his facial structure. After the two merge, Ventus' heart clashes with Vanitas. When Ventus' heart is fractured in this battle as a cost of defeating Vanitas, Sora's heart offers for his heart to take shelter in his own body, so Ventus could regain his strength. Meanwhile, Ventus' friend Aqua hides the boy in their home, the Land of Departure, and transforms it into a new form called Castle Oblivion that will allow him to stay hidden until he reawakens.

Unknowing of the decision his heart made, Sora would continue to live peacefully with his friends Kairi and Riku, and other children such as Tidus and Wakka (from Final Fantasy X), and Selphie (from Final Fantasy VIII). The trio of friends desired to explore other worlds, so they built a raft to sail away from Destiny Islands. The night before their voyage, however, an ominous event occurred. A strange darkness overtook the islands, and creatures known as the Heartless appeared. Desperate to protect the raft, Sora went to locate Kairi and Riku, the latter announcing that he wasn't afraid of the incoming darkness, allowing himself to be sucked into a Corridor of Darkness; however, thanks to Ventus' heart, Sora was then granted a magical weapon called the Keyblade in order to fight the Heartless, and found himself thrown through the universe.

Awakening in a place called Traverse Town, Sora teamed up with Donald Duck and Goofy to find his friends, as well as King Mickey. Together, they would venture through various worlds in order to save the universe from the Heartless, led by Ansem, Seeker of Darkness, who sought to open the door to Kingdom Hearts, the source of all light. After fighting Ansem, now possessing Riku's body, in Hollow Bastion, Sora ends up sacrificing himself to Kairi and the other Princesses of Heart, whose power he used to open the door. His sacrifice gives birth to his own Heartless, Kairi's Nobody, and his Nobody, Roxas, sharing the same facial features as Ventus. Sora is able to return from his Heartless form thanks to the bond he shared with Kairi, and with Donald and Goofy, the trio travel to the End of the World to defeat Ansem and seal the Door to Darkness, a doorway leading to the realm of darkness. He and Kairi end up separating, but not before Sora promises to Kairi that he will be back.

Concurrent to Sora's recovery, Roxas is quickly discovered by the head of Organization XIII, Xemnas, who declares Roxas an Organization member and orders him to do various tasks. He also makes friends with two other members of the Organization: Axel and Xion. The latter is later revealed to not be a traditional Nobody, but a puppet Replica created around Sora's memories. Xion is eventually forced by the Organization to kill Roxas and absorb him to become a "complete" Sora, though Roxas defeats her with regrets. Roxas is then taken captive by Riku, led by Ansem the Wise under the pseudonym DiZ. Roxas then realizes that he must cease to exist and merge with Sora to regain his memories. After some initial resistance, Roxas willingly accepts his demise for the greater good.

Sora, now awake with all of his memories intact, sets out on another adventure to take down the Organization members and Xemnas. Heading to the The World That Never Was, Sora reunites with Riku and the two foil Xemnas's plans to merge with his artificial Kingdom Hearts, and are able to find themselves back home on Destiny Islands, fully reuniting with Kairi. In the process, they learn that Ansem is a separate being from Ansem the Wise, really a pseudonym belonging to a Keyblade Master by the name of Xehanort. Xehanort split himself into two beings: Ansem, his Heartless, and Xemnas, his Nobody, in an attempt to call forth Kingdom Hearts and re-initiate the ancient Keyblade War. Previously, he had attempted this by splitting Ventus and Vanitas apart, allowing them to later fuse to create the χ-blade, the very first Keyblade, which can summon Kingdom Hearts.

Later, Sora and Riku are tasked by Yen Sid to complete the Mark of Mastery exam to become Keyblade Masters themselves after sensing the return of Xehanort. It is later revealed by copies of Xehanort that he plans to assemble 13 Seekers of Darkness that all carry a piece of his soul, becoming the true form of Organization XIII, in order to restart the Keyblade War. While only Riku becomes a Keyblade Master, Sora is still believed to be the one destined to save the day. Vowing to stop Xehanort, Sora manages to save Aqua from the Realm of Darkness, and uses the power of waking on Ventus in Castle Oblivion, after Aqua reverted it back to the Land of Departure. Together with Donald, Goofy, Mickey, Kairi, Riku, and Lea, the true form of Axel, they head to the Keyblade Graveyard to fight Xehanort's clones and his subordinates.

Although the group manages to save Terra and Xion from Xehanort's grasp, and restore Roxas and his heart, Xemnas kidnaps Kairi and delivers her to Xehanort, who promptly destroys her after the group defeats the last of Xehanort's subordinates in order to craft the χ-blade. Using all their strength, Sora, Donald, and Goofy manage to defeat Xehanort in Scala ad Caelum, and stop his plot to reignite the Keyblade War. Sora then travels into The Final World in order to save Kairi, but at the cost of supposedly being lost forever.

One year later, Sora awakens in a nighttime version of The Final World and discovers himself intact. He calls for anyone to answer him, and encounters Yozora, the protagonist of the fictional video game Verum Rex who was mentioned by a Nameless Star that Sora had met in the Final World. Yozora cryptically claims that he was sent to "save" Sora, and teleports himself and Sora to the city of Quadratum. A battle ensues in which Sora is the victor, and Yozora fades after realizing his power was not yet needed, something which a confused Sora asks.

Afterwards, Sora returns to the daytime version of the Final World, and his fate after that unknown as his friends continue to search for him. Kairi learns that Sora has ended up neither in the realm of light nor darkness, but "somewhere on the other side," from which Ansem the Wise gathers that he has landed in the realm of fiction. With the help of the Fairy Godmother, the two learn about about Quadratum, and Riku leaves for the city in search of Sora while Kairi remains behind in order to train under Aqua.

At some point in time in Quadratum, Sora wakes up in a luxurious apartment and immediately meets Strelitzia, who tells him that he has arrived in Quadratum and has been asleep for a week there. Sora then finds out that the Heartless are invading Quadratum and proceeds to fight a Darkside Heartless in the city.

During Sora's reveal trailer for Super Smash Bros. Ultimate, it was revealed by Super Smash Bros. series creator Masahiro Sakurai that Sora was the overall highest-voted character on the Smash Bros. Fighter Ballot.[1][2] On a related note, Bayonetta's reveal trailer in December 2015 declared her as the winner of the Fighter Ballot among "realizable and negotiable characters", implying that Sora's inclusion at the time was impractical for legal reasons. 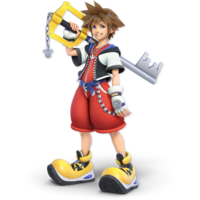 Sora, as he appears in Super Smash Bros. Ultimate.

Sora appears as a newcomer in Super Smash Bros. Ultimate, with his inclusion being announced during a Mr. Sakurai Presents presentation on October 5th, 2021.[1] He is the final fighter of Fighters Pass Vol. 2, the final DLC fighter overall, and was released on October 18th, 2021. In addition to confirming Sora's aforementioned status as the Fighter Ballot's overall winner, Masahiro Sakurai revealed that Sora's inclusion was made possible thanks to an encounter with a representative of Disney at a "certain game awards venue."[3] As a result, Fighters Pass Vol. 2's roster was increased from five fighters to six to accommodate Sora's inclusion.