For fighter info, see Dark Pit (SSB4) and Dark Pit (SSBU). For information about his base counterpart, see Pit.

Dark Pit (ブラックピット, Black Pit), is a character from the Kid Icarus series, debuting in Kid Icarus: Uprising. He is a rival and clone of Pit, created after Pit destroyed the Mirror of Truth. He is visually identical to Pit, but has a black outfit, black wings, black hair, red eyes, and a purple circlet. He also has a more serious and aggressive personality.

In Kid Icarus: Uprising, Dark Pit was created from the Mirror of Truth, a mirror that possesses the ability to duplicate beings and objects into the exact opposite of the person that has used it. In Chapter 5, Pit destroyed the mirror and Dark Pit was created the moment the Mirror caught onto the image of Pit. The owner of the mirror, Pandora, planned to use the mirror to create a "Pit" to pledge allegiance to the Underworld Army. However, Dark Pit soon attacked her, absorbed her powers to gain infinite flight, then fled from the Labyrinth of Deceit only to follow up to Pit and Palutena chasing after him. During his battle with Pit, Dark Pit claims that unlike him, he follows no one but himself and that Pit's faith in Palutena only results him into being nothing but a servant.

Later on in the game, Dark Pit is seen fighting off the Underworld forces as Pit was approaching Medusa for the "Final Battle", and aids him temporarily by defeating the Underworld Gatekeeper only to find that he was being called "Pittoo" ("Blapi" in Japanese). He appears later on in the game to aid Pit and Palutena knowing that he and Pit share a bond together, and is also playable in one chapter.

Following their victory in war with Hades, Dark Pit temporarily became an officer in the Forces of Nature under Viridi's command, as revealed in Palutena's Guidance. Their alliance was forged when their interests in defeating Pit and Palutena overlapped, as revealed by Dark Pit himself.

Being a mirror image of Pit, Dark Pit acts as his foil and possesses clashing personality traits. While not necessarily evil, as he does possess a sense of right and wrong and occasionally acts heroic, Dark Pit is much more aggressive and hostile. He is more cunning and prone to violence, and is much more intelligent with a dry wit to his humor. He inherited Pit's strong will and blunt nature, willing to stand up to anyone deemed a threat, especially towards those he trusts like Palutena and Viridi. Unlike Pit, he despises being a servant and taking orders, preferring to act alone and make decisions for himself.

It is believed that Pit's black palette swap from Brawl served as inspiration for Dark Pit.

One of Pit's palette swaps in this game is a black colored Pit described on Smash Bros. DOJO as a "fallen angel".[1] However, since Brawl predates the true debut of Dark Pit in Kid Icarus: Uprising, it is likely this design became the basis for his creation, especially since both games are directed by Masahiro Sakurai (whose redesigns of Pit and Palutena in Brawl also went on to be used in Uprising.) 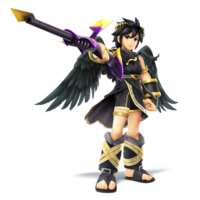 Dark Pit as he appears in Super Smash Bros. 4.

Dark Pit briefly appeared at the end of Palutena's reveal trailer and in the background of her promotional poster, and was later revealed as a playable character. He functions mostly as a clone of Pit, down to the very meaning of the word: his entire moveset and even his attributes (such as air speed and dash speed) are completely the same as Pit's, with the only differences between them being two of his specials, Silver Bow and Electroshock Arm, his forward tilt inflicting less knockback than Pit's, his neutral infinite's finisher having a smaller hitbox, and his Final Smash, Dark Pit Staff.

In addition, Dark Pit was originally planned to be an alternate costume of Pit, but became a separate character due to a designer having already modeled the Electroshock Arm, as well as Masahiro Sakurai wanting Dark Pit to have his own Final Smash, the Dark Pit Staff.[2]

Dark Pit is tied with Pit for 32nd/33rd out of 55 characters on the current tier list for Smash 4, putting him in the D tier. Although the differences between Pit and Dark Pit are minuscule at best, Dark Pit's Electroshock Arm side special has significantly more KOing power compared to Pit's Upperdash Arm. This was made more apparent in update 1.1.3, which altered Electroshock Arm's launch angle, allowing for better KO potential, particularly when used on opponents close to the edge of the stage. Of course, being a clone of Pit, Dark Pit suffers from the same general KO issues. Currently, Dark Pit has little tournament representation.

Dark Pit's trophy in Super Smash Bros. for Wii U

Pit's mysterious, black-clad doppelgänger, Dark Pit. (Some call him Pittoo, but he really doesn't like that.) When he first appears, he immediately goes after both Pit and the Underworld Army. In Smash Bros., he uses moves a lot like Pit's, though both his bow and his Sacred Treasures are different.

Pit's mysterious, black-clad doppelgänger, Dark Pit. (Some call him Pittoo, but he really doesn't like that.) When he first appears, he immediately goes after both Pit and the Underworld Army. In Smash Bros., he uses moves a lot like Pit's, though both his bow and his Final Smash are different.

Pit's black-winged doppelgänger. Dark Pit, aka Pittoo (although he's not exactly fond of being called that), looks like Pit, moves like Pit and uses very similar attacks. He's a lot more aggressive, though, and doesn't take orders from anyone. He also has his own weapons, like his Silver Bow.

Dark Pit's Guardian Orbitars special puts up shields of light on either side of you to block attacks, deflect projectiles, and push back any enemies who are too close. You can even use the shields to protect against attacks from above and below. If they take too many hits, though, they'll vanish and become unusable for a while.

Dark Pit's Guardian Orbitars special puts up shields of light on either side of you to block attacks, deflect projectiles and push back any enemies who are too close. You can even use the shields to protect against attacks coming from slightly above or below you. If they take too many hits, though, they'll vanish and become unusable for a while. 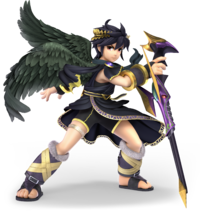 Dark Pit as he appears in Super Smash Bros. Ultimate.

Dark Pit returns in Super Smash Bros. Ultimate once again as an unlockable character. He is still a clone of Pit, but is now rebranded as an Echo Fighter.

As with his counterpart, Dark Pit received several buffs in the transition from Smash 4. While his overall gameplan has changed very little, many multi-hits connect more reliably, his combo starters are more consistent, and he generally benefits from universal mobility improvements. Most notably, Silver Bow is significantly more powerful, better compensating for its limited steering compared to Pit's Palutena Bow. However, he retains his lack of clear strengths from before, and as such is generally considered to be low to lower-mid tier.