However, the playable Young Link in the Super Smash Bros. series is based specifically on the incarnation who made his debut in The Legend of Zelda: Ocarina of Time, in which the "Hero of Time" begins his quest as a young boy. Initially growing up in Kokiri Forest under the assumption of being a Kokiri, Link was eventually summoned by the Great Deku Tree to receive his very own fairy, Navi. During this, the Tree also reveals that Link is destined to save Hyrule by preventing a desert man clad in black armor from acquiring the Triforce, an almighty relic that can grant any wish.

However, the Tree is under attack by monsters pillaging his innards, and even after Link dispatches them, the Tree has nevertheless has been cursed to death by the man in black armor. Before dying, the Tree imparts his final words of wisdom, telling Link to venture to Hyrule Castle.

Upon arriving at Hyrule Castle, a chance meeting with Princess Zelda results in her telling him of her prophetic dreams of Ganondorf, who is revealed as the aforementioned man clad in black armor, as well as a young boy clad in green who would emerge from a forest while accompanied by a fairy. Due to fitting this description, Link allies with Zelda and proceeds to collect the Spiritual Stones in order to assist her in preventing Ganondorf from accessing the Sacred Realm and acquiring the Triforce that lies within it.

Although Link is successful in acquiring all three stones, he is too late to reunite with Zelda, who escapes on horseback alongside Impa, her attendant. However, Zelda nevertheless manages to throw the Ocarina of Time into Hyrule Castle's moat, allowing Link to claim it and proceed with their plan of stopping Ganondorf. She then telepathically directs him to play the Song of Time in front of the Temple of Time's altar, which would open the Door of Time and allow Link to access the Master Sword that lies beyond it and use the sword to stop Ganondorf.

Upon drawing the Master Sword from the Pedestal of Time, Link is accepted by the sword as its master. However, it nevertheless seals him away within the Sacred Realm, owing to him being too young to truly challenge Ganondorf. To further compound this, Ganondorf anticipated his and Zelda's plot and managed to acquire the Triforce for himself upon Link's sealing within the Sacred Realm.

Seven years later, a 16-year-old Link is awakened within the Chamber of Sages by Rauru, one of the six Sages. Upon explaining what happened to Link and the Triforce after he drew the Master Sword, Rauru declares him to be the "Hero of Time". Rauru proceeds to grant Link a Medallion before instructing him to awaken the remaining Sages and collect their respective Medallions in order to gain their assistance in defeating Ganondorf.

During this quest, the Great Deku Tree's newborn sprout additionally reveals that Link is not a Kokiri, but actually a Hylian that was left in the Tree's care by his dying mother in order to survive the Hyrulean Civil War that was going on at the time. This sprout would go on to be the Great Deku Tree in The Legend of Zelda: The Wind Waker. By using the Master Sword and Pedestal of Time's collective power to travel back and forth between his childhood and adult ages, Link proceeds to awaken the Sages, gain their support, and acquire the Triforce of Courage to finally defeat Ganondorf and save Hyrule.

Immediately after stopping Ganondorf, Zelda sends Link back in time in order for him to relive his essentially lost childhood. A few months later, Link leaves Hyrule to search for Navi, who inexplicably left him after he placed the Master Sword back into the Pedestal of Time soon after stopping Ganondorf. During his search, he is ambushed by a Skull Kid wearing a mysterious mask. Upon giving chase after having Epona, his faithful steed, stolen by the Skull Kid, Link winds up in the mysterious parallel world known as Termina.

Soon after Link becomes an unintentional ally of Tatl, one of the Skull Kid's fairy friends, he meets the mysterious Happy Mask Salesman. The Salesman reveals the Skull Kid's mask to be Majora's Mask, an ancient artifact that possesses a tremendous amount of magical power. Link and Tatl soon encounter Skull Kid and Tael, Tatl's brother and the Skull Kid's other fairy friend. Tael reveals a clue on how to stop the Skull Kid, which leads Link on a quest to stop him from using the vast power of Majora's Mask to launch the Moon into Termina.

As Link's quest progresses, the clue turns out to be a reference to the Four Giants, Termina's guardian deities. Due to lashing out against Termina and its people long ago because of the Giants' decision to protect the land while laying dormant, the Skull Kid was expelled from Termina by the Giants. Ultimately, Link frees the Four Giants from being confined by the magic used by Skull Kid. With the Giants' help in halting the Moon's descent, Link then proceeds to destroy Majora's Mask after it abandons Skull Kid, who had used him as a puppet the entire time. Upon saving Termina, Link bids the Skull Kid, Tatl and Tael farewell before returning to Hyrule to resume his search for Navi.

Although Link is ultimately revered as the Hero of Time in a parallel timeline created upon Zelda sending him back in time, he becomes full of regret over his near-total lack of recognition as a hero within his own timeline. When coupled with his failure to teach his skills to any successors during his lifetime, Link's regret became so significant that it prevented him from passing on to the afterlife upon his death. This subsequently resulted in him lingering on as a sword-wielding, armor-clad spirit.

A number of centuries later, Link, under the guise of an ethereal, golden wolf, would encounter his bloodline descendant, the Link of The Legend of Zelda: Twilight Princess. After teaching all seven of his skills, Link finally eases his regrets and passes on to the afterlife, but not before bidding farewell to his descendant and offering him some final words of encouragement. Ultimately, these skills assist his descendant's destined growth into the "Hero of Twilight", who succeeds the Hero of Time as the savior of Hyrule by stopping the Twilight-based invasion led by Zant and his ancestor's nemesis, Ganondorf. This marks the only time that two different Links canonically meet plot-wise. The only other example being in The Legend of Zelda: Breath of the Wild, where players can use an amiibo to get Wolf Link, but this does not affect the story and is considered non-canon. 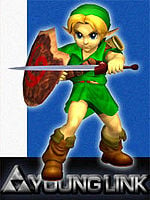 Young Link, as he appears in Super Smash Bros. Melee.

Young Link appears as an unlockable character in Super Smash Bros. Melee. He is a clone of his older self and differs in a number of ways: he is unsurprisingly smaller, weaker and lighter, yet boasts better mobility thanks to his much faster dashing speed, ability to wall jump and longer wavedash.[1]

Although Young Link's special moves are burdened by his aforementioned shorter range, they nevertheless have benefits to compensate. Fire Bow[1] boasts combo potential, thanks to its Fire Arrows' higher hitstun. Young Link's Boomerang can be thrown at wider angles,[1] while his Spin Attack is useful for punishing rolls thanks to its multiple hits. Lastly, Young Link's Bomb has twice as many hitboxes as Link's Bomb, which give it greater damage potential and make it better in regard to combos.

Thanks to his strengths, Young Link is ranked 16th on the tier list, placing him in the E tier. In addition to rendering him as a mid-tier character, this places him two spots above his older self.

As a playable character, Young Link has three trophies - a normal trophy won beating the Classic Mode with Young Link on any difficulty, and "Smash Red" and "Smash Blue" trophies are acquired by beating the Adventure and All-Star modes, respectively.

Young Link
Link's younger incarnation is often considered to be the true Link: he was a young boy in the very first Legend of Zelda game, and he has appeared as a youth in most of the subsequent games. Since his debut on the original NES in 1987, Link's appearance has changed over and over again, each time adding to the mystique of his incomparable story.

Young Link [Smash]
Young Link is lighter and faster than his older self, and his Kokiri sword packs less punch. Even though his Boomerang has a shorter range, he has greater control over it. He's a smaller target, and while his Hookshot has less reach than the older Link's, you can still use it in midair as a last-ditch attempt to grab a ledge.
B: Fire Bow
Smash B: Boomerang

Young Link [Smash]
With a youthful spring in his step, Young Link can perform amazing wall-jumps. Once he hits a wall, tap the Control Stick in the opposite direction to send him leaping upward; you can practice to your heart's content in Target Test. His Spin Attack can strike multiple times even on the ground, and although it's hard to discern, so do his Bombs.
Up & B: Spin Attack
Down & B: Bomb

Young Link was one of the five playable characters in Melee who did not return in Super Smash Bros. Brawl. Instead, he has effectively been succeeded by Toon Link, owing to both functioning as a younger, smaller, weaker, and faster version of Link. Toon Link also derives most of the moveset differences Young Link had from his older self, such as forward smash's first hit having set knockback, grounded Spin Attack hitting multiple times, and down aerial being capable of meteor smashing.

Various forms of Young Link, however, still appear as stickers from The Legend of Zelda: Majora's Mask.

While Young Link does not make any appearance whatsoever in Super Smash Bros. 4, his adult self is featured in the trophy "Adult Link (Ocarina of Time)". Young Link is also indirectly referenced via Link's eighth alternate costume, which is almost identical to Young Link's Fierce Deity transformation. Lastly, Toon Link's Hero's Bow has a custom variation based on Young Link's Fire Bow. 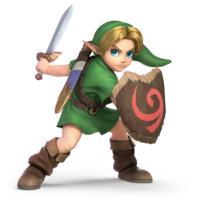 Young Link, as he appears in Super Smash Bros. Ultimate.

After a two installment absence, Young Link returns as a playable character in Super Smash Bros. Ultimate. When discounting the adult aged Hero of Time's cameo in SSB4 via the "Adult Link (Ocarina of Time)" trophy, this marks his first appearance of any kind in the Super Smash Bros. series in 10 years. On a related note, this is also Young Link's first playable Super Smash Bros. appearance in 17 years, a distinction shared with fellow Melee veteran Pichu.[2]

Although Young Link's descendant, the "Hero of Twilight", has been succeeded by the "Hero of the Wild" as a playable character in Ultimate, Young Link nevertheless possesses mechanical and aesthetic aspects from both his own moveset in Melee and his descendant's moveset in SSB4. When coupled with the new Link featuring a number of noticeable mechanical and aesthetic differences, Young Link has been further decloned, though not enough to change his full clone status.