Dark Samus (ダークサムス, Dark Samus) is a character from the Metroid series. Originally appearing as a gigantic, heavily mutated Metroid that plagued Tallon IV alongside the very toxic mutagen called Phazon, Dark Samus is the primary antagonist of the Metroid Prime trilogy and one of Samus Aran's greatest foes alongside Ridley and Mother Brain. 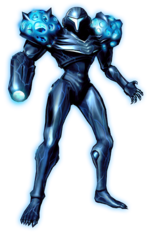 Before attaining her current form, Dark Samus was originally known as Metroid Prime, the titular creature of the game. After Samus Aran defeated it in the final boss fight, it lashed out at Samus and stole her Phazon Suit upgrade before dissolving into a pool of Phazon. While Samus evacuated the collapsing Impact Crater, Metroid Prime had, unbeknownst to her, survived the battle.

In a post-credits stinger scene, an armored hand emerged from the Phazon pool, signaling the rebirth of Metroid Prime as a Phazon-based cyborg: Dark Samus. This hybrid acquired all of Samus' abilities, as well as sapience. However, she was also obsessed with consuming Phazon, a trait retained from her time as Metroid Prime.

Dark Samus, as she would come to be known by the Space Pirates, is first seen by the Pirates in Metroid Prime 2: Echoes. They initially believe she is Samus wearing a new suit, but are disturbed as she only cares about absorbing the Phazon mined on Aether. Her meddling results in the Pirates' operation being discovered by the Galactic Federation, leading to Samus' arrival. Dark Samus attacks Samus on sight, the two fighting multiple times across Aether.

Once Samus defeats the Ing and triggers the dimensional collapse of Dark Aether, Dark Samus interrupts her escape. Overloaded by Phazon, she manages to hold her own against Samus, in spite of the latter wearing the Light Suit, but is ultimately bested again. She then disintegrates after failing to steal Samus' Light Suit, and appears to perish in Dark Aether.

Following this defeat, Metroid Prime 3: Corruption opens with Dark Samus' remains being unknowingly collected by the Space Pirates, allowing her to reconstitute in one of their Phazon transports. She absorbs all Phazon aboard the ship, which further develops her sapience alongside streamlining her physical body. Thanks to this sapience, Dark Samus brainwashes the Pirates with Phazon and initiates a new goal: galactic conquest via the spread of Phazon.

Leading the brainwashed Pirates, Dark Samus captures Aurora Unit 313, a Federation supercomputer, and implants it into Phaaze, the sentient planet that is the source of all Phazon. Dark Samus controls the spread of Phazon by launching Phaaze's Leviathans, living Phazon asteroids that corrupt the planets they strike into Phazon wastelands. She targets key Federation planets to cripple their galactic defenses.

Although Samus stops one of the Leviathans, Dark Samus corrupts her and three other bounty hunters (Rundas, Ghor and Gandrayda) with Phazon. The other hunters ultimately fall victim to Phazon corruption, forcing Samus to kill each of them on her journey to kill the Leviathans. In the finale, Dark Samus confronts Samus for the final time on Phaaze, first in direct combat and then by merging with Aurora Unit 313. Samus destroys 313 and, because of its symbiotic connection to both Dark Samus and Phaaze, seemingly kills Dark Samus and renders all Phazon inert.

"Dark Samus" as she appears in the Co-Op Event 7: Battle of the Dark Sides in Brawl.

Dark Samus appears as a trophy and as a sticker. Additionally, a "Dark Samus" appears in Co-Op Event 7: Battle of the Dark Sides, though it is merely a blackened version of Samus and not the actual Dark Samus. It teams up with Dark Link against two players that play as their normal counterparts, with Link as player one and Samus as player two.

Dark Samus
A twin image of Samus, encountered near the beginning of Metroid Prime 2: Echoes. Dark Samus is identical to Samus in every way but color--she even uses similar attacks. There are many theories on the origin of Dark Samus, but none are proven. Dark Samus uses Phazon for energy and can absorb it to heal damage. Samus encounters Dark Samus a number of times.

Dark Samus appears as an Assist Trophy in Super Smash Bros. 4. Unlike her trophy in Brawl, she uses her design from Metroid Prime 3: Corruption. Some of Dark Samus' attack animations are similar to Samus', such as her down tilt and her up smash. She hops around with long jumps, attacking with three different moves:

Before leaving, Dark Samus strikes a pose in which she holds her Arm Cannon in front of her face. Like several other Assist Trophies, she can be defeated if she takes enough hits. Upon being defeated, Dark Samus will disappear by fading out in a bright blue flash, similarly to when she is defeated in Metroid Prime 2: Echoes. 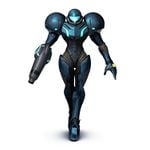 Dark Samus's trophy in Super Smash Bros. for Wii U

This terrifying creature is made of Phazon. Along with regenerative abilities, she can also brainwash her victims and clone herself. Summoned into Smash Bros., she resembles Samus Aran and mimics some of her moves, firing Arm Cannon blasts, launching homing energy blasts, or even unleashing Phazon.

An exceptionally strong and terrifying being made of Phazon. She's able to regenerate, brainwash her victims and even clone herself. When summoned in this game, she'll either fire rapid shots from her Arm Cannon, launch homing energy blasts, or unleash Phazon across the surrounding area, depending on where her target is. 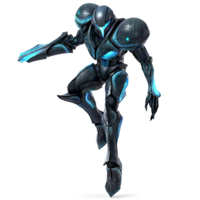 Dark Samus, as she appears in Super Smash Bros. Ultimate.

Dark Samus appears as a newcomer in Super Smash Bros. Ultimate, and was formally announced alongside Simon, Richter, Chrom, and King K. Rool during the Super Smash Bros. Direct on August 8th, 2018.[2] According to Masahiro Sakurai, Dark Samus and Chrom were included because of significant fan demand from overseas and Japan, respectively.[3] Unlike in Brawl and SSB4, Dark Samus' design is a combination of her organic features and color scheme from Metroid Prime 2: Echoes and her redesigned Phazon Suit from Metroid Prime 3: Corruption.

As an Echo Fighter of Samus, Dark Samus is virtually identical in regard to function, although she does deviate from Samus in a few ways.[2] As with other Echo Fighters, she has different animations, taunts, and victory poses (including a distinct victory fanfare).[3] Unlike Samus, Dark Samus' rolls do not involve her transforming into a Morph Ball, but are compensated with slightly less ending lag. She also uses Phazon in her moveset, which is indicated by blue flames with the electric effect for all but two of Samus' respective flame-based moves, and dark blue energy for both Charge Shot and Phazon Laser (her version of the Zero Laser).