Samurai Goroh as he appeared in the F-Zero manual with his katana.

Samurai Goroh appears in the Super Smash Bros. Melee opening FMV in a heated two-way race with Captain Falcon ramming their respective racing machines into each other on the Mute City track, but the Blue Falcon is able to send the Fire Stingray flying off the track and crashing into the camera. Samurai Goroh also appears as a collectible trophy along with his racing machine, the Fire Stingray, which is also seen in the two F-Zero-themed stages in the game.

Samurai Goroh features as a collectible trophy, unlocked as one of the 100+ trophies that can be collected randomly during normal play, such as in the Trophy Lottery and throughout the various Single-player Regular Matches, though it only appears once 200 VS matches have been played. It depicts both Goroh and his racing machine, the Fire Stingray.

Samurai Goroh
A rival bounty hunter, Samurai Goroh has crossed paths with Captain Falcon in many a dark corner of the universe. He also goes head-to-head with Falcon in F-Zero races, so the threads of their fates seem to be deeply intertwined. Samurai Goroh is famous for his katana, and his signature T-shirt is instantly recognizable. 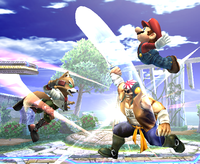 Samurai Goroh slices Mario and Fox with his sword in Brawl

Samurai Goroh makes his gameplay debut as a computer-controlled Assist character in Super Smash Bros. Brawl as one of the many secondary Nintendo characters that can appear from the Assist Trophy item in battle. When released, he does a loud battle cry before running around the stage, wildly swinging his katana. His slashes will continue so long as he is moving or jumping, allowing him to trap enemies in a flurry of hits before sending them away.

Brawl's game data reveals that Goroh has an unused second trophy (an unfinished version of his Melee trophy), featuring him and his F-Zero Machine, the Fire Stingray.

A man who presents himself as a bounty hunter much like Captain Falcon but is also the boss of a notorious bandit group. He tries to collect criminal bounties but always fails to beat Captain Falcon to the collar. He considers himself Falcon's archrival and always tries to beat him in F-Zero races. His machine, the Fire Stingray (#05), has a high top speed.

A man who presents himself as a bounty hunter much like Captain Falcon but is also the boss of a notorious bandit group. He tries to collect criminal bounties but always fails to beat Captain Falcon to the collar. He considers himself Falcon's arch-rival and always tries to beat him in F-Zero races. His machine, the Fire Stingray (#05), has a high top speed.

Samurai Goroh is the subject of 2 stickers in Brawl.

Samurai Goroh returns in Super Smash Bros. 4 as an Assist Trophy, maintaining a similar function as in Brawl, only this time he can be damaged.

The Fire Stingray is present as a stage element on the Mute City stage in Super Smash Bros. for Nintendo 3DS, with its appearance from the original F-Zero game.

Samurai Goroh's trophy in Super Smash Bros. for Wii U

This infamous pilot considers himself to be Captain Falcon's main rival. His racing machine, the Fire Stingray, is incredibly fast. If summoned into battle, he'll head toward the nearest opponent and slash with his katana. He definitely makes a better friend than foe!

An infamous F-Zero pilot who considers himself to be Captain Falcon's main rival. He races as number 5 with his speedy Fire Stingray. When released in this game, he'll head straight for the nearest opponent, swinging his sword with reckless abandon. Try not to get on his bad side.

Samurai Goroh retains his role as an Assist Trophy, functioning identically to how he did in Smash 4, albeit KOing him now earns a point. Training Mode describes his Assist Trophy with the following: Charges around the stage, swinging a dangerous katana. He cannot appear on Midgar, Mute City SNES, Norfair, and Suzaku Castle.

Samurai Goroh also appears as a Legend-class primary spirit. He can be summoned using the cores of Takamaru, Sakura Samurai, Tac, and one Attack type.