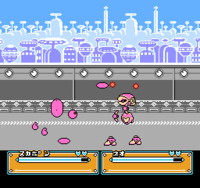 Sukapon was made by Dr. Little Emon and Dr. Ivan Walnuts. When Dr. Walnuts declared his intent to rule the world, Dr. Emon used Sukapon to defeat Dr. Walnuts's robots and stop his evil scheme. After an epic battle on the moon and a change of heart by Dr. Walnuts (apparently due to a split-personality), Sukapon returned to a career in owarai.

Sukapon is a tricky character, with a moveset slightly unconventional and many ways to keep the opponent guessing. Movement is vital in a game without corners even though everyone's backspeed is the lowest possible. Everyone has at least one special move to stop runaway tactics; Sukapon has two: Sukapon Roll and Konaniran, both of which have extra possible inputs for more options. Sukapon Roll charges towards the opponent and can either spring Sukapon forward, stop all momentum, or make n sharp arc for extra—but randomized—damage. It can be done in the air too, changing arcs based on vertical momentum. Konaniran sends Sukapon's head out half-screen and as it comes back Sukapon can move towards it instead. Sukapon also has an overhead toss as well as Tondeker, a projectile with adjustable speed via lateral inputs. Sukapon's damage output is average at best, though is regarded as lacking overall due to slow movement, floaty jump, and said movement specials being rather bad as attacks. Sukapon's low gravity leaves the robot open against many characters after the roll connects, and the head-tossing move Konaniran is powerful, but slow.

Every one of the original eight robots has an advanced stage 4 clone. Sukapon's clone, Sukapokon, has more of an aggressive playstyle and considered among the best in the game. Each of the stage 4 enemies get extra damage and speed as well as more knockdown attacks. Sukapokon Roll knocking down makes it far more useful despite its lower blockstun. Lastly, Konaniran is replaced with Nonsense, a rapid-punch attack borrowed from another character who bears some similarities to Sukapon.

Sukapon was originally going to be an item in Melee, and would have been able to be jumped on by characters, but was cut for "adult matters".[1]

Sukapon appears as a sticker in Brawl.

Sukapon appears as an Assist Trophy in Ultimate, moving around the stage while twirling with raised arms, and can jump with flailing hands whenever. Sukapon attacks by using three special moves: Tondeker, a head-tossing projectile; Sukapon Toss, a closs-range throw; and Sukapon Roll, a spinning charge with a long rebound. Sukapon can also block attacks just like in Joy Mech Fight, but is still vulnerable to grabbing. Sukapon has small black dots for eyes but has a circle surrounding the dot when attacked and on the Tondeker head projectile, giving off a surprised expression. The Assist Trophy does a little dance before vanishing, a reference to the Joy Mech Fight victory animation. Like many Assist Trophies in Ultimate, Sukapon can be defeated. Training Mode describes the Assist Trophy: Spins around and tackles opponents, occasionally chucking its own head.

Sukapon is also a Legend-class spirit, available in the Spirit Board or in the shops. The spirit fight is a stamina battle against Mii Gunner (meant to represent Dr. Little Emon[2]), whose attack power periodically increases, on Coliseum, with Sukapon constantly appearing as a hostile Assist Trophy.