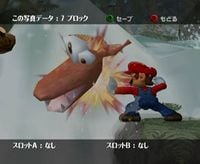 A Klaptrap as seen on Kongo Jungle 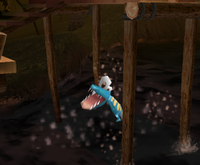 A Klaptrap as seen on Jungle Japes

Klaptrap appears on the Jungle Japes and Kongo Jungle stages, leaping out of the water to bite opponents. Klaptraps appear in two different colors:

Klaptraps do not come out of containers like other enemies do. They can however be used as regular items in the TEST stage using an Action Replay or other hacking device. Klaptraps are invulnerable and cannot be damaged, unlike other enemies.

The Klaptrap also makes an appearance as a collectable trophy, where its name is written as "Klap Trap".

Klap Trap
This low-slung alligator made its first appearance in Donkey Kong Country. You can subdue it by jumping on its back, but its powerful jaws make it dangerous to approach from the front. In Super Smash Bros. Melee, it swims in the river and sometimes jumps in the Barrel Cannon to stop players from using it.

A Klaptrap as seen on Jungle Japes.

Like in Melee, Klaptrap reprises its role as a stage hazard on the Jungle Japes stage. Instead of randomly appearing, they now consistently appear every 10 seconds. If a character makes contact with a Klaptrap, they will be meteor smashed. It can no longer one-hit KO like in the previous game (in part due to the newly introduced swimming greatly reducing downward speed), but it still deals a lot of damage and knockback.

Klaptrap appears as a collectable sticker.

A Klaptrap as seen on Jungle Japes.

Like in Melee and Brawl, Klaptrap reprises its role as a stage hazard on the Jungle Japes stage. Their appearance cycle was reverted to 7-18 seconds like in Melee instead of every 10 seconds in Brawl. Like in Brawl it cannot one-hit KO, but it still does high knockback and swimming does not exist in for Nintendo 3DS, making it likely to result in a KO. Its design was updated to be smoother, making it resemble its official artwork more closely.

A Klaptrap as seen on Kongo Falls.

Klaptrap appears in Super Smash Bros. Ultimate as an Assist Trophy. Once summoned, it runs around the stage and latches onto any opponent it touches. Once latched, it bites down, doing repetitive damage similar to the Fan. As with most Assist Trophies in Ultimate, it can be KO'd. Its function, as described in Training Mode, is that it "leaps up on opponents and bites down with sharp fangs." They cannot be summoned on Jungle Japes, Kongo Falls, and Suzaku Castle.