The stage takes place on the rooftop of the Japanese castle at sunset. It features two long walk-off platforms on the right side, and two smaller floating platforms on the left side. Only the lower platform on the right is solid. The position of the lower-left platform is a fair distance away from the main platform, and provides a challenge for more than one character to stand on it, allowing for camping. Signposts located on the longest platform will break if a fighter is launched past them. The signposts are eventually repaired after all of them are broken.

In Super Smash Bros. 4, the Ω form of the stage consists of only the main platform centered without the smaller platforms and walk-off areas. The signposts can be broken even on this version of the stage, making it the only Ω Form stage to have interactive parts, albeit them being static. Both Ryu Stage Type A and B and Ken Stage Type A and B will change to become faster on the Ω form as well.

In Super Smash Bros. Ultimate, the Ω form and Battlefield form are very similar to the Ω form in SSB4; however, the main platform is resized and reshaped to match Final Destination and Battlefield, respectively. The three soft platforms of the Battlefield form resemble the platform on the bottom left of the normal form. As with some other Ω forms, the stage select preview of the Ω form of this stage is an early version of the stage, and the final version differs slightly in design. 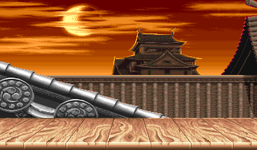 In Street Fighter II, Suzaku Castle (Japan) is Ryu's stage. Like all Street Fighter stages it is a simple flat surface with no hazards. The twilight setting and breakable signs in the Smash stage are inspired by the version of this stage which appears in the original Street Fighter II: The World Warrior.[1]

The coloration of the stage was updated in Super Smash Bros. Ultimate to more closely resemble the stage's appearance in Street Fighter V.

This stage is banned from tournaments (except the Ω form) due to containing walk-off blast lines, and that the stage layout forces most of the gameplay to take place on the right hand side of the stage.