Similar to Mushroomy Kingdom from Brawl and 3D Land from the 3DS version, Pac-Land is a side scrolling stage that moves automatically. The scrolling speed is dependent on each player's location: moving ahead will speed it up, while lagging behind will slow it down. The stage follows the layout of the original Pac-Land arcade game, going through three rounds before reaching Fairyland. After this, the stage scrolls back to the left, mimicking Pac-Man's return trip in the original game. After each of the first two rounds, a "Break Time" sign appears, and a point display is shown; this is purely aesthetic, and no high score is kept.

The stage starts at Pac-Man's House, and scrolls through a town where buildings can be used as platforms. Three Fire Hydrants appear in the first section, shooting water that pushes players back. The second section is a forest where players appear as silhouettes behind the trees. Three tree trunks appear as obstacles. Out of the six total hydrant and log obstacles, two are randomly selected to be pushable to the right. If done correctly, the player to do so is rewarded by temporarily growing, akin to touching a Super Mushroom. The third section is a bridge consisting of platforms suspended above water (which players cannot swim in). A model ship can be collected to add extra platforms, and water spouts serve as damaging hazards. The stage then transitions to Fairyland, where the Mother Fairy appears. She spawns a pair of Wing Shoes that reward a player with a temporary boost to jump height.

The stage then begins scrolling right-to-left, signalling the return trip. It starts with tall cacti that serve as obstacles, before moving into a canyon area that features collapsing log bridges. Hitting a certain point spawns a Special Pac item that grants temporary invincibility. After passing by a small lake, the stage returns to the town. Pushing a certain hydrant releases balloons that heal damage when touched. The stage ends at Pac-Man's house, where Ms. Pac-Man can be seen. The cycle then starts over again on a new trip.

Every time a cycle starts, a splash screen displays the number of the current trip. Each cycle takes approximately two minutes and thirty seconds to complete. Unlike the original Pac-Land, the cycles are the same each time, although the color of the sky is dependent on the trip (starting at midday and cycling through evening, night, and morning before returning to day).

In Super Smash Bros. for Wii U, the Ω form of this stage takes place in the canyon area. Despite having walls and a platform extending below the blast line, wall jumps are impossible here; this is the only stage with this distinction.

In Super Smash Bros Ultimate, the Ω form and Battlefield form are similar to the Ω form in SSB4; however, the main platform does not extend below the blast line and is resized and reshaped to match Final Destination and Battlefield, respectively. The three soft platforms of the Battlefield form are made of pixelated wood and are unique to this form. The characters are still flat, which also flattens the hitboxes and alters gameplay significantly as a result.

With hazards off in Ultimate, the stage still scrolls, and its speed is still affected by the positions of the fighters. However, several other changes are made to the stage: 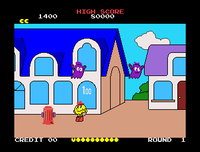 The town level as it originally appeared in Pac-Land. A fire hydrant can also be seen.

The stage is a faithful recreation of the 1984 arcade game Pac-Land, a side-scroller where Pac-Man sets off to return a lost fairy to her home. Starting at his house, Pac-Man goes left-to-right through three areas before reaching Fairyland. In exchange for returning the fairy, he receives a pair of Wing Shoes, which allow him to jump indefinitely. He then travels right-to-left through a fourth area to head home, after which the cycle repeats. Every area except the Castle is featured in this stage. While the original game's levels change as the game progresses, the Pac-Land stage has a predetermined layout that always remains the same. Although the game was based on the Hanna-Barbera Pac-Man cartoon, and appears as such in the version published by Bally Midway (publisher of the Pac-Man titles internationally in the '80s), the level in Smash is primarily based on the Japanese version, which bases its designs for Pac-Man and his family off of artwork from previous arcade cabinets. This game was also the first official installment to feature the more anthropomorphic designs of the Pac-Man characters in-game.

Pac-Land is notable for being one of the first games to use parallax scrolling (where the foreground and background move at different speeds to simulate perspective), long before it became a gaming mainstay in the 16-bit era. This is reflected by the parallax scrolling on the stage.

Pushing a fire hydrant to grow is inspired by the Helmet power-up in the game, which could be obtained the same way. The Special Pac was an item found on the return trip that granted an extra life.

Ms. Pac-Man was a character not created by Namco, but by Midway. She would eventually be owned by Namco years later, although legal troubles would eventually lead to her being used more scarcely, unnamed, or outright replaced by look-alikes in some rereleases of Pac-Man titles that featured her. Pac-Land was the first appearance of the character in Japan.

The setting of Pac-Land reappears in later Pac-Man games, but with different designs. Its most notable modern appearances is in the Pac-Man World games.

This stage is banned in tournaments, due to the stage containing walk-off blast lines, autoscrolling, no grabbable edges, and sections that require precise platforming, which completely disrupts any form of competitive play.