In All-Star Mode in Super Smash Bros. Melee, this stage is played on when the player face Ness and any of his teammates. In both Brawl and Ultimate, Ness is fought here for his unlocking battle.

The center of the stage is occupied by a building with two awnings which act as soft platforms. Stepping on the awnings 5 times makes the sign tilt, and stepping on them 2 more times makes them drop and become unavailable; they get automatically restored after a short time.

On the right there is a light blue house with a festoon over it, which acts as a soft platform. On the left there is a yellow house: the tree over it provides two soft platforms which react to the weight of fighters and items.

Several more buildings appear but because they are beyond the lateral blast lines, they cannot be accessed during gameplay. 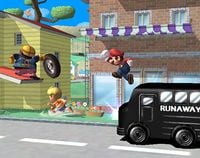 At times a warning sign appears near the side of the screen, signifying that a car or van will pass by the bottom of the stage. The vehicles can hit and damage fighters, as well as destroy or activate items like crates. Every vehicle deals 30% damage, but their other properties differ:

Starting in Brawl, all vehicles do 30% damage and set horizontal knockback, making the stage less hazardous.

The background features several more elements: a hospital, a hotel, a backhoe, and a hill with some houses (including Ness's) and a meteorite on top. On the foreground, outside the normal camera view, there is a white canopy and some bicycles. On the right of the stage, slightly beyond the blast line, there is a sign with a warning about the black van.

Onett returns in Super Smash Bros. Brawl with multiple changes. The stage prefix is now EarthBound: Onett. The biggest change in this version of Onett is that the knockback from the cars have been significantly reduced, and now deal set knockback. As a result they have lost their KO abilities at realistic percentages unless someone is very close to the walk off edges. Their damage output, however, remains unchanged and they can still disrupt gameplay. The cars also no longer have unique horn sounds, and instead the horns are randomized when one is about to pass. Another change in the stage is that the right edge of the left building's roof can no longer be grabbed. Also, there are slight lips on the both sides of the house on the right. This prevents characters against these walls from jumping to avoid cars. Another slight change to this stage is that the red cross on the building of the Hospital has been removed, most likely due to issues about the Red Cross emblem. These changes carry over to versions of Onett in later installments.

To the right of the blue house is the The "Onett Message Board". It is readable in Brawl when the Devil Assist Trophy moves the stage to the right or when an unrestricted camera hack is in use. In Melee, it can be read simply by standing close to it, pausing and moving the camera. It is also easy to read the sign in Ultimate using camera controls, and becomes even easier to view on the Ω form due to the main platform being in front of the regular stage, sometimes even being legible during normal gameplay. The player can also pause while standing just right of the blue house, then zoom out to read the sign.

In SSB4, the vehicles lose their unique launching properties.

In Ultimate, the design of the buildings in the background more closely match their appearance in EarthBound.

In Super Smash Bros. for Wii U, the Ω form is set on the roof of a much bigger version of the drug store with the platform extending below the blast line. Walk-offs, cars, and falling canopies are removed.

In Super Smash Bros. Ultimate, the main platform of the Ω form and Battlefield form is reminiscent of the drug store from SSB4's Ω form, such as the floor resembling the building's roof top and the walls resembling the bulding's facade; however, the drug store, as well as the rest of the town, are in the background. The platform does not extend below the blast line and is resized and reshaped to match Final Destination and Battlefield, respectively. The three soft platforms of the Battlefield form are red, blue, and purple canopies, with the former two being unique to this form. 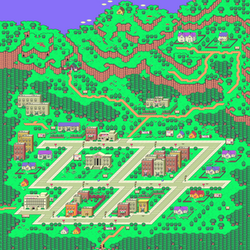 Onett as it originally appeared in EarthBound.

This stage is based on Onett from EarthBound, which is Ness's hometown in the country of Eagleland. Its name is derived from the number one, as it is the first town that Ness visits, and the numbering scheme is continued through the names of the following towns in Eagleland (Twoson, Threed, and Fourside). Onett's actual layout in EarthBound is different from this stage.

The buildings that act as the main platforms of this stage include a drugstore, which act as item shops where Ness can withdraw and deposit money with an ATM and save the game with a payphone; the blue house on the right, which bears resemblance to how small houses were designed in EarthBound; and the yellow house on the left, which is not based off any house in EarthBound.

The Runaway Five's tour bus as it originally appeared in EarthBound.

Cars, including Taxis, drive along the streets in the cities, but unlike in this stage they stop when in front of Ness until he gets out of the way. The black van, which in EarthBound never appears in Onett, belongs to the Runaway Five, a band with debts that Ness and his friends help repay. To show their gratitude, they offer Ness a ride from Twoson to Threed. The bulletin board which warns players about the van is inspired by similar bulletin boards in EarthBound which feature miscellaneous messages.

Some of the elements in the background and outside the stage's bounds include the Onett arcade, where Ness defeats the Sharks and their leader Frank Fly; a hospital, where status aliments including unconsciousness can be healed; a hotel, where the party's HP and PP can be fully recovered; a backhoe resembling the one in Dusty Dunes Desert, and a canopy in the stage's foreground that resemble the shops of Burglin Park in Twoson.

The very back of the stage also depicts the steep cliffs at the north of Onett. These feature Ness's house, Porky's house, the entrance to the cave that leads to Giant Step, and the meteorite which crashes on top of the hill at the beginning of EarthBound, thereby kickstarting the plot; however, their positioning is different with respect to EarthBound.

The Ω form in SSB4 takes place on top of a wider version of the drugstore with some flowers and a trash can, which is reminiscent of the first meeting between Ninten and Lloyd in EarthBound Beginnings, where Lloyd is hiding in a trash can on the roof of Twinkle Elementary School.

In the early metagame of Melee, Onett was considered tournament legal as a counterpick stage. However, the stage is now banned in all games it appears in. The reasons for banning are the same across games; the walls allow for infinite combos (this problem is more prevalent in Melee and not at all in Smash 4), and the stage hazards of the cars can disrupt gameplay and easily allow for early kills. The lack of a lower blast line also removes the edge guarding component of characters; the low ceiling at the top of the stage and the walk-off blast lines also can allow for very easy and early KOs. 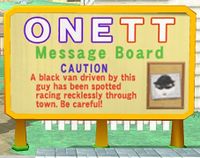 The message board as seen in Onett, which talks about a Runaway Five member racing recklessly through Onett in a black van.

The rice ball, as seen when the bush textures are removed from the stage.