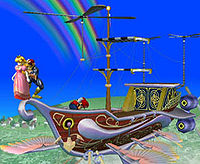 The battle starts off on a flying ship that is facing left. The ship has seven propellers and six giant paddles, which make it fly. The anchor hangs off the bow. The ship is flat in the center, but not on the sides. The bow of the ship is just a bit higher than the deck. The stern is clearly higher than the rest of the ship, including the bow. It is wide enough to fit two characters. The stern increases the height of the back of the boat, which can help characters who can wall-grapple. In the middle of the boat is the mast of the ship. It has two levels to fight on. The space between the middle platform and the deck is slightly larger in comparison to the space between the top platform and the middle. The top platform is also shorter than the middle one. It is just large enough to fit Bowser. After about thirty seconds, the ship will crash into the next segment of the stage and sink. When the ship sinks, the characters will have to battle on the strange floating platforms that follow. The platforms are different and feature a rotating axle platform, flying carpets, and falling blocks. The stage moves in a clockwise order and at the end, downward-pointing arrows that flash red will appear. They indicate that all players should descend to the lower parts of the stage before the camera zooms down. Those who do not make it to the boat, which is waiting below, will be KO'd off the top off the screen. The cycle continues from there.

In Ultimate, any sections of the obstacle course which are beyond the camera bounds, even if they are within the blast zones, are intangible, preventing fighters from exploiting them for camping, or teching to avoid ceiling KOs.

In Super Smash Bros. Ultimate, the main platform of the Ω form and Battlefield form is the same size and shape as Final Destination, and the design is based on the flying ship of the regular form, such as the floor resembling the ship's deck and the walls resembling the ship's hull. In the Battlefield form, the top soft platform's design is based on the ones on the ship's mast, and the two bottom ones are based on the swinging platform of the regular form. The stage also does not scroll.

With stage hazards off, players will only fight on the flying ship as the stage never scrolls to the other areas.

Mario riding a flying carpet through Rainbow Ride as seen in Super Mario 64.

This stage is loosely based on Super Mario 64's 15th level, Rainbow Ride, and contains various elements from the level that include the giant flying boat with wings, which has been scaled down and redesigned in this stage; flying carpets that transport Mario to different parts of the level; a seesaw-like platform, which has also been scaled down and redesigned; a giant pendulum-like swing platform, which is redesigned in this stage; and Donut Blocks, which are platforms, first appearing in Super Mario Bros. 3, that fall if Mario stands on them for too long.

Notably, Rainbow Ride is set far above the clouds in Super Mario 64; however, on this stage it is much closer to the ground. It is also worth noting that "Rainbow Cruise" is the Japanese name for the course, which is also displayed in Super Mario 64's debug menu. The usage of "Rainbow Cruise" instead of "Rainbow Ride" in the North American version of Melee initially appeared to be an oversight by the localization team; PAL versions of Melee and Brawl name the stage "Rainbow Ride", and North American demos of Brawl also used "Rainbow Ride" before being changed for the final release. However, all English versions of Ultimate use "Rainbow Cruise", cementing it as the stage's name despite the localization difference.

Rainbow Cruise was allowed in the past during the early stages of the Melee and Brawl metagames; although it was a scrolling stage, it had a predictable pattern and was thus allowed by many tournament organizers. However, it has now been almost universally banned in notable tournaments in both games. This is because the stage has ungrabbable ledges, disappearing platforms, and winding, non-linear passages throughout the entire cruise. This creates massive problems for characters with either poor to mediocre recoveries or slow and sluggish aerial maneuvering. The stage greatly favors characters with good air mobility and jumping ability, allowing some already top-tier characters to almost guarantee a win on this stage (such as Jigglypuff in Melee and Meta Knight in Brawl), and overcentralizes keeping up with the stage instead of actually fighting with the opponent. The abundance of alternative pathways through the stage can also promote stalling by allowing faster characters to avoid fighting altogether.

This stage was also unbanned as a one-off in Apex 2015 for the Salty Suite match between Ken vs. PC Chris. However, neither player counterpicked to this stage during that set. 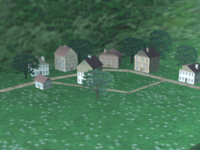 The little village visible on the cliff side.