This article is about the item in SSB4 and Ultimate. For the attack effect in Brawl, see Grass (effect).

Grass (グラス, "Grass") is an item from the Mario series. 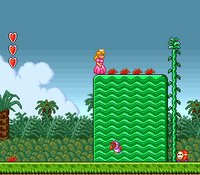 Peach next to several patches of grass in the Super Mario All-Stars version of Super Mario Bros. 2.

Black tufts of grass made their appearance in the Japan-only game Yume Kōjō: Doki Doki Panic (repurposed as Super Mario Bros. 2 for international markets, where the grass tufts become red). When plucked, they will produce an item, most commonly a vegetable but sometimes a Magic Potion, a POW Block, a bomb, or a Turtle Shell. In Subspace, plucking grass rewards the player with coins that can be spent at the end-of-level slot machine.

Players can also pull up Stop Watches in place of every fifth ripe vegetable, Rockets, and in the Game Boy Advance remake, hearts, all of which activate immediately. In Super Mario Advance 4: Super Mario Bros. 3, grass tufts reappear, reprising their function in Super Mario Bros. 2, though they are now green like the vegetables' leaves. In Captain Toad: Treasure Tracker, the grass tufts are replaced by Pluck Patches, which functions in a similar manner.

Greninja having just obtained a Fire Bar from grass.

In Super Smash Bros. Melee, the grass tufts appear as part of the background element in the Mushroom Kingdom II stage.

The grass debuted as a carrying item in Super Smash Bros. 4.

The grass tufts randomly appear on the stage platforms and ground. The fighter who plucks it will receive a random item - with some exceptions such as Freezies and Pitfalls - and briefly holds it above their head before wielding it (if it can be wielded) or automatically using it (if it is a status or recovery item). If the platform vanishes, the grass it grows on will disappear.

In Super Smash Bros. Ultimate, the grass does not appear in the list of items when editing the rules.

The Grass trophy appears in both versions.

Grass's trophy in Super Smash Bros. for Wii U

This special grass first appeared in Super Mario Bros. 2, where plucking it revealed hidden items. It works exactly the same way in Smash Bros.—if you pluck the grass, maybe you'll find a game-changing object! If only cleaning an unkempt lawn would reveal such neat things...

A patch of overgrown grass with an item buried underneath. Grass like this grew all over the place in Super Mario Bros. 2, and Mario and co. could pull it up to get all kinds of handy items for their quest. It works the same way in this game: pull it up to get an item. Who knows what it'll be?