This article is about the Lumas as an entity. For other uses, see Luma (disambiguation).

Lumas (チコ, Chiko) are star-like creatures from the Mario series. They appear in a variety of colors, and possess a number of distinct abilities related to outer space, most notably the ability to transform into celestial bodies. The Lumas are commonly seen alongside Rosalina, who acts as their surrogate mother, as well as Lubba, who acts as their leader.

Lumas have appeared in central roles in both Super Mario Galaxy and Super Mario Galaxy 2. They are friendly creatures who have the ability to transform into several outer space-related objects, such as Launch Stars, planets, and even Galaxies. They can also grant abilities to others, such as the ability to shoot Star Bits or Spin. Not much is known about the Lumas' origin, although what is known is that upon death, they are reborn into new stars. They come in a variety of colors, including yellow, red, blue, green, apricot, dark brown, pink, purple, turquoise, and orange. Giant varieties have also been seen.

Lumas have generally appeared in background roles, but one was made playable for the first time in Mario Tennis Open for Nintendo 3DS. 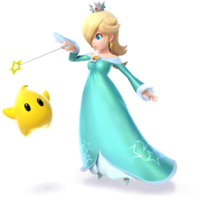 A Luma alongside Rosalina, as they appear in Super Smash Bros. 4.

The Lumas fight alongside Rosalina as newcomers in Super Smash Bros. 4. They function similarly to Pikmin in that they have a set amount of hit points, but can also fight on their own, similarly to the Ice Climbers. In addition to the yellow Lumas that always appear with Rosalina at the start of a battle, green, blue, red and apricot (the color of baby Luma) Lumas can appear, as does Polari. However, Polari and these other varieties only potentially join the battle when the initial Luma is KO'd.

Lumas do not have any trophies of them alone, although they share several trophies with Rosalina.

Rosalina & Luma's trophy in Super Smash Bros. for Wii U

The mysterious Rosalina lives in the Comet Observatory with the Lumas. In Smash Bros., Rosalina and Luma can fight in different places at the same time. If you can trap someone between Rosalina and Luma, you'll be able to unleash incredible damage with their joined attacks!

Rosalina and the Lumas have been close ever since she travelled the galaxy with one of the little star-like creatures. Now, the commander of the Comet Observatory appears in this game, with her trusty companion fighting alongside her. Their greatest strength is being able to attack together at the same time.

Rosalina can pull in items and projectiles around her with her Gravitational Pull move. Her up special Launch Star is a diagonal jump and, though harmless, it has exceptional range. You also have some control over Rosalina's trajectory when she uses it.

With a flick of Rosalina's wand, the move Gravitational Pull draws in items – even ones that are stuck somewhere. Her Launch Star up special is a diagonal jump that can be aimed slightly. It doesn't deal any damage, but it helps you jump higher and stay in the air longer, making it ideal for getting back to the stage easily. 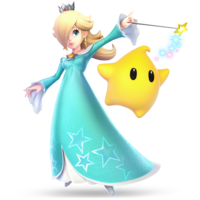 A Luma alongside Rosalina, as they appear in Super Smash Bros. Ultimate.

Lumas reappear alongside Rosalina in Super Smash Bros. Ultimate. They have been nerfed during the transition, as they have less hit points and get knocked back more easily from attacks, leaving them much more susceptible to KOs. However, Lumas have also gained a 1.5× damage multiplier when launched away from Rosalina, and respawn earlier in battles with multiple players.

In Adventure Mode: World of Light, Luma is presumably one of the countless spirits captured by Galeem during his takeover of the universe. Luma's spirit is located in the outer space section of The Light Realm.

Luma's Spirit Battle uses an army of Kirby puppet fighters and is fought on the Mario Galaxy stage. During the battle, Star items will appear, referencing the Luma's star-shaped bodies.