Dr. Mario (ドクターマリオ, Doctor Mario) is a 1990 puzzle video game for the Nintendo Entertainment System and the Game Boy. In the game, Mario, in his Dr. Mario persona, uses vitamins to destroy three different types of viruses by lining up three vitamins the same color as the virus, bearing some similarities with Tetris. The Game Boy version of the game appears in Super Smash Bros. for Wii U as a Masterpiece, and must be unlocked by clearing 10-Man Smash with Dr. Mario without taking damage. 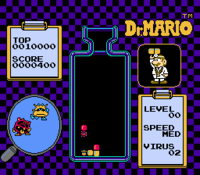 Gameplay of the NES version of Dr. Mario.

Dr. Mario made his debut in this game. The viruses also appear as trophies and stickers.

The Megavitamins that are used for Dr. Mario's neutral special move and his Final Smash originate from this game.

The "Fever", "Chill", and "Chill Ver. 2" tracks originated from this game.