Yoshi (ヨッシーのたまご, Yoshi's Egg), known in Europe as Mario & Yoshi, is a 1991 puzzle video game developed by Game Freak for the Nintendo Entertainment System and the Game Boy. Despite the name, the player does not actually play as Yoshi, but rather as Mario. The basic format involved a number of objects falling from the top of the screen in one of four columns. When they reach the floor, they stop, and if they fall on top of another object, they stack. Mario has the ability to switch any two adjacent stacks. He must maneuver the columns such that objects of the same type fall on one another and cancel each other out. The Yoshi Egg object will fall in two halves, and if united, will hatch a baby Yoshi. The adult Yoshi stands to the side of the screen, keeping score of the amount of baby Yoshi hatched.

Yoshi appears as a Masterpiece in Super Smash Bros. for Wii U. It must be unlocked by clearing Classic Mode with Yoshi. The player is given 3 minutes to a demo, and begins at the title screen, allowing them to play both the A game and the B game. Despite its prominence as a masterpiece, there are no elements from Yoshi's moveset, or from stages in Smash series that originate from this game. 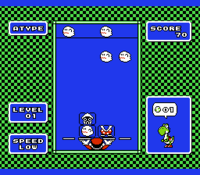 Screenshot of the game as it appears on the NES.