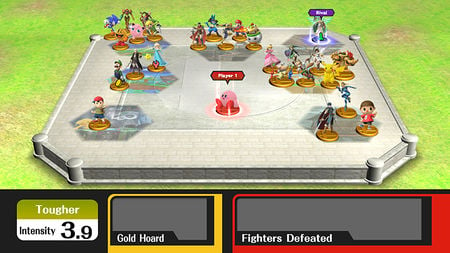 Classic Mode in Super Smash Bros. for Wii U.

The Super Smash Bros. for Wii U version of Classic Mode is set up as a tournament with elimination style gameplay which lasts seven rounds. For the first time in the series, Classic Mode can be challenged by two players.

Like in the Classic Mode of Super Smash Bros. for Nintendo 3DS, the player begins with two stocks for each battle regardless of difficulty. The intensity meter is used to set the difficulty, with higher difficulties costing more Gold and offering better rewards. Losing and choosing to continue when the difficulty is above 2.0 costs some of the accumulated prizes and drops the difficulty by .5, also taking away some of the invested Gold to reflect the new difficulty. The prize roulette wheel is also shared with the 3DS version, with the addition of passes for Crazy Orders as potential prizes.

The mode is set on a large playing field, whose background depends on the intensity chosen, becoming darker and fiercer with higher intensities:

On the field, the player character and the opponents appear as trophies: the player, identified by a glowing red trophy base, can choose which group of opponents to fight by moving their character towards it. The stage where the battle will be fought is visible on the field under the opponent(s), though it may not be related to their series even if there is only one opponent. Overly large stages such as The Great Cave Offensive and 75m are never used. After each round, the losers are ejected from the field until only the last few remain. Team battles can occur, in which the player must choose their teammates among the characters they have previously defeated (or by their teammates in a previous team battle). During all rounds, opponents may hold trophies, equipment, coins, or Crazy Orders Passes, identified by the respective icons on the enemy's trophy, which are obtained only if the carrier is defeated by the player or, in a team battle, by one of the player's teammates. Enemies holding such rewards are set to a higher CPU skill level than other opponents.

The first three rounds are fought against regular characters. At the beginning of each playthrough, a random opponent is designated as a "rival": marked by a glowing blue trophy base, the rival gets stronger and drops greater prizes the longer the player holds off on confronting them. In most cases, the rival will remain on the board until the player finally defeats it, but in very rare cases, they can lose before the player can face them.

After three rounds are cleared, the empty board will be repopulated with new groups of enemies. The fourth and fifth rounds are fought against characters equipped with custom special moves, marked by an alternate trophy with a black base and appearing in an alternate costume.

When the player chooses a battle in the first five rounds, one or more opponents might suddenly be replaced by an "intruder", marked by a glowing yellow trophy base, even in a team battle. Intruders are always in a permanent Giant or Metal state, but are guaranteed to be carrying a prize of some kind for victory.

The sixth round is against a Fighting Mii Team composed of 20 members, which appear surrounding the player on the game board in a group of nine.

In for Wii U, Classic Mode is a co-op mode that can play with 2 players.