This article is about the online mode in Brawl, Smash 4, and Ultimate. For information about the spectators during a match, see Crowd. 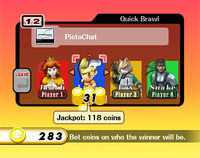 Betting in the Spectator mode in Brawl.

Spectator Mode was available within the With Anyone sub-menu. When viewing a match, only the characters used and stage was shown, with the names being omitted.

Before the match started, players could optionally bet up to 100 coins on possible winning players or teams. Once the match starts, the coins were immediately deducted from the players, so no attempts could be made to retrieve them if the bet was lost. Players would receive stickers regardless of if they won or lost the bet. However, should their bet be correct, the player would win the "Jackpot," which was their original bet multiplied by a multiplier contingent on the number of players in the match:

Assuming the player had no information about the match and so bets at random, the spectator would statistically lose coins in the long run. For very small bets however, the value was rounded up, giving a neutral payout overall.

Occasionally, spectators were offered a "Bonus Chance". If the bet was correct, the spectator would also win one of the following:

As betting was done at a loss in the long run, betters would have had to apply matchup knowledge to their betting strategies and take advantage of bonus chances in order to gain coins in the long run.

Prior to the match starting, spectators may optionally bet up to 100 coins (shortened to "G") on possible winning players or teams. Should the chosen player win the bet, they will receive the Jackpot, which is their wager multiplied by the winning combatant's multiplier. Afterwards, the player is given the option to go for a "Winning Streak" - betting with winnings from the previous game instead. This obviously results in a much larger potential for payouts. However, after the third consecutive win, the winnings are automatically paid out (which may result in the unlikely, but achievable 100,000G theoretical cap).

In four-player matches, should the chosen character come second, called a "Near-Win," then the spectator will be rewarded with an automatic and much smaller "Nice!" payout.

Bonus Chances also return, awarding extra gold, trophies, and other rewards, though only in the case of a "Jackpot" outcome.

As a result of new bet multipliers and "Near-Win" payouts, betting is much more profitable in SSB4 compared to Brawl, due to an almost guaranteed long-term payout, assuming a good betting strategy is used.

Spectator Mode returns in Super Smash Bros. Ultimate. Unlike in previous games, players no longer bet coins on players or teams. Instead, as of version 4.0.0, players can "Cheer"/"Support" to win Prediction Points which can be spent on Spirits, snacks, Spirit Board items, Classic Mode Tickets, Gold, and Spirit Points.