From SmashWiki, the Super Smash Bros. wiki
(Redirected from Share)
Jump to navigationJump to search 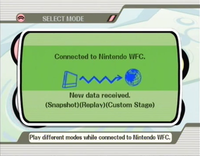 The message that appeared when a new Smash Service submission was received.

The Smash Service was a free feature in Super Smash Bros. Brawl provided by Nintendo via Nintendo Wi-Fi Connection.

Each day, a new custom stage, new screenshot, and new replay would be sent to players who had the feature enabled. They were then subsequently deleted at the end of the day. Examples of content sent over the service can be found here.

On June 30th, 2009, Nintendo stopped accepting new submissions, but continued to send out current submissions. The service was later discontinued as part of Nintendo WiFi Connection's closure on May 20th, 2014.

The main menu in Share mode in Super Smash Bros. for Nintendo 3DS.

Share is a mode in Super Smash Bros. 4 that allows users to post photos, replay data, and Mii Fighter data to an official server to share with other users around the world. In Super Smash Bros. for Wii U, players can also share custom stages. Users are also be able to share data with specific users on their 3DS or Wii U Friend List. Data uploaded to the server will be deleted after 30 days. Players could also see a gallery of the most recently uploaded photos, replays, and Mii Fighters. The gallery can be filtered by country of origin, who uploaded it (anyone, friends, or the player), Mii Fighter class, and/or mode created in (for replays).

The discontinuation of the Miiverse service on November 8, 2017 affected the capabilities of Share mode. This removed the option to upload replays to YouTube, send snapshots, as well as the option to share custom stages. However, sharing replays and Mii Fighters is still possible. 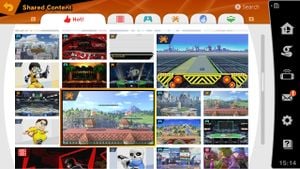 Endorsing content is done by clicking a "Yeah!" button, which acts as a "like" button similar to other community sites. It also has similarities to Miiverse. Content that has recently been getting large amounts of likes is shown in a “Hot!” category, among other categories (Videos, Replays, Spectate, Mii Fighters, and Stages).

Users are able to sort between content by either choosing to sort By Recommended, By Popularity, and By Date.

Shared content appears to feature a moderation system, put in place to disallow users from uploading potentially sensitive content, such as stages shaped in the form of inappropriate poses or prohibited imagery. Users can report other users who upload such content by clicking on the user, then clicking the report button; whether moderation is done automatically is unknown, however.