This article is about the widescreen Options menu. For the KO in which a character is launched toward the camera, see Screen KO. For the menu option in Super Smash Bros., see Screen Adjust.

The Screen menu in Super Smash Bros. Brawl gives an in-game means of changing the widescreen settings of the Wii console to match the television being used. It is accessed via the Options menu from the main menu. By default, it inherits the setting enabled in the main Wii console options, though players can choose to override this setting.

The two options are:

A circle appears in the background on this menu to help the player see which screen size is more suited to their TV. 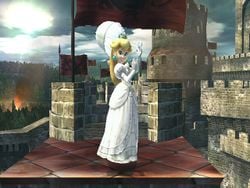 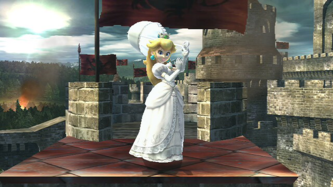 As the Wii was set to 16:9 ratio, the left image of Peach appears "compressed"
due to the game still outputting at 4:3. The corrected image appears on the right.

Changing the screen ratio does not change the Wii's output resolution, which remains at 640×480, even on the default PAL setting of 576i 50Hz; only the way the picture is rendered within that resolution is changed. As a result, snapshots captured on a widescreen-set console will appear in a 4:3 aspect ratio if decrypted and viewed on a PC.

This feature was added due to a significant amount of the population still using CRT television screens with a 4:3 aspect ratio during the launch of Brawl. While widescreen had been available for decades by that point, compatible screens were much more expensive and had inferior picture quality until much more recently. CRT sets had also grown a reputation for having extremely low display lag compared to its modern contemporaries, becoming a prefered method of playing retro games developed with that type of hardware in mind.

A method to switch between 4:3 and 16:9 ratios did not return in the Wii U version of Smash 4, and instead, the selection between 4:3 and 16:9 is done by modifying the settings of the Wii U. Regardless, Smash 4 itself does not support 4:3 ratio; if the Wii U is set to output at 4:3, the game will be letterboxed as to keep it at a 16:9 ratio. The Nintendo Switch has no way to adjust aspect ratios, meaning Ultimate can only be natively played at a 16:9 ratio.