Not to be confused with Flat Zone or Flat Zone X.

In Brawl and for 3DS, Mr. Game & Watch is fought here when being unlocked.

Like its predecessor, Flat Zone, it is set on a standard Widescreen Game & Watch titled "Super Smash Bros." Unlike Flat Zone, however, this stage shifts between different Game & Watch scenarios, with every change being signaled by the appearance of a specific element.

The Fire version in Super Smash Bros. for Nintendo 3DS.

Fire (1981 version): This scenario is the main area of the stage - the match always begins here and the other games have to revert back to Fire before the stage can change again. People jump out of a burning building as firemen with a trampoline attempt to catch them. The levels of the building can be stood on, and the trampoline that the firemen use can be bounced off of like a spring. When the firefighters aren't present, the randomly moving platforms from Manhole appear, similar to those in Melee's Flat Zone. The treasure diver from Octopus sometimes appears, collecting items lying on the ground.

The upcoming shift to Fire is signaled by a fireman who appears in the top right of the screen, ringing a bell. 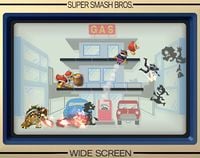 The Oil Panic version in Brawl.

Oil Panic's bottom screen (1982): A multi-tiered gas station building can be stood on. Customers standing below attack if attacked by players; the man will attack immediately when he receives damage, while the woman will delay for almost a second after being damaged before attacking.

The upcoming shift to Oil Panic is signaled by a policeman who appears in the top right of the screen, ringing a bell. 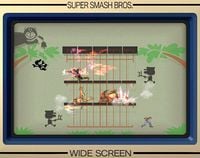 The Lion version in Brawl.

Lion (1981): The center of the stage is a cage on three levels with a semisoft top. Two Lion Tamers holding chairs flank either side, moving up and down. Being hit by a chair deals high damage and horizontal knockback, often resulting in being knocked into the Lion Tamer at the other side of the cage with the same effect, or even beyond the side blast lines.

The upcoming shift to Lion is signaled by a panther who appears in the top left corner of the screen, ringing a bell. 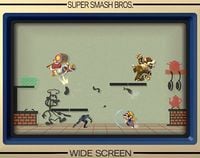 The Chef version in Brawl.

Chef (1981): Two sets of platforms hover in midair, and a chef throws damaging food around with his pan. If the chef is hit with a strong enough attack, he will fly off screen and the game will return to Fire.

The upcoming shift to Chef is signalled by a kettle which appears in the left side of the screen, with steam in shape of a bell coming out of it.

The Ω form features a brick platform above the normal ground, and blast lines are moved further back. The stage is set in the Oil Panic section and does not transition. It is visually identical to the Ω form of Flat Zone X in Super Smash Bros. for Wii U.

From 1980 to 1991, Nintendo produced handheld electronic games called Game & Watch, and there would be one game for each model of a Game & Watch. Game & Watch games use an LCD screen, the same type as an ordinary calculator, which means characters and other moving objects can only move to pre-determined locations on the screen and everything appears flat. Whenever objects move, a beeping sound can be heard. In this stage, the fighters and stage elements on the screen are all flat, and beeping sounds are heard when walking on the stage.

The default stage layout, including the Game & Watch outer casing, is based on the widescreen 1981 re-release of Fire, which originally came out in 1980 as part of the Silver Game & Watch series. In Fire, two firemen holding a stretcher try to bounce people jumping out of a burning skyscraper to a nearby ambulance. Fire was also the only Game & Watch device from the "Widescreen" series to have a blue outline.

The other stage transformations are based off of the Game & Watch games Lion, Oil Panic, and Chef. Lion involves two lion tamers trying to keep multiple circus lions in their cage with chairs; Oil Panic involves a gas station employee trying to dump oil into his boss's oil drum below, so it can be taken to people who needed their cars filled; and Chef involves a chef trying to keep several pieces of food in the air. All of these games are faithfully represented in Flat Zone 2, though in the case of Oil Panic (which had a dual screen à la the Nintendo DS and 3DS), only the bottom screen appears.

Like its predecessor, Flat Zone 2 is banned in competitive play, due to the variety of damaging hazards (such as the falling food items in the Chef scenario), the small size of the stage, the camera's refusal to zoom in at any point, the constantly changing stage setup, and the removal of the lower blast line (which makes techniques that require it, such as meteor smashes and edge-hogging, virtually useless). Furthermore, the walk-off edges allow characters to throw or spit others off the side blast lines.