The level immediately follows the events of Battleship Halberd Interior. Peach and Zelda (the latter assuming the guise of Sheik, though she can transform back anytime in the level), are seen leaving the room in which they had been, going against the recommendation by Snake not to.

At the end of level, the pair find themselves on the Halberd's deck, standing near the Combo Cannon. Fox's Arwing flies overhead, firing at and destroying the Combo Cannon, startling the nearby Peach. Not knowing what Fox's intentions were, Sheik teleports onto Fox's Arwing and smashes the cockpit covering, making Fox lose control. Fox ejects and the two fall to the deck below, ready to fight, but are interrupted by Peach. The princess offers a cup of tea to Fox, who, in confusion, looks at Sheik to see her drinking tea herself. Fox too decides to accept the tea.

Fox is not playable in this level, but rejoins the team after this level is completed. 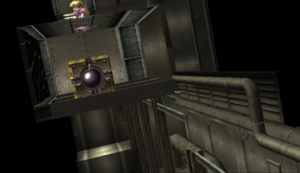 The bomb block hidden inside the ceiling. Note that it is the thematically correct variant, despite never being visible to the player.