Temple is one of the eighteen default stages available in Super Smash Bros. Melee. It is a Legend of Zelda stage on which characters from that franchise (along with the characters from the Fire Emblem franchise) will usually battle the player in the single player modes. The layout is based on the palaces from Zelda II: The Adventure of Link.

In Melee's All-Star mode, this stage is played on when Zelda and her teammates are fought. It is also where Zelda will fight in Classic Mode and will sometimes play the song "Lost Woods", from The Legend of Zelda: Ocarina of Time.

In Super Smash Bros. Brawl, the stage no longer has a chance of playing the "Fire Emblem" medley theme from Melee, because the track has moved to the Fire Emblem-themed Castle Siege stage. A remix of the "The Great Temple" theme from Zelda II: The Adventure of Link can be obtained to play on this stage in My Music, making it the only Melee stage that has a new piece of music available to play on it. In Brawl, the ledge on the right hand side can no longer be grabbed on the larger bottom platform as it could in Melee.

The underground area on the stage is referred to by Nintendo Power as the "Fight Club". It is termed so because battles there tend to produce disproportionately high damage totals because the surrounding environment has walls on all sides that can be teched on, which keeps characters from leaving the stage and greatly increasing the difficulty of KOing them. The ease in which a high damaged character can survive in the Fight Club can often lead to players turtling inside. The area is also known by a variety of other nicknames by players, such as "The Pit".

Due to its immense size and its structure, Temple is a stage where notable feats involving the traversing of large area are performable, such as the Hyrule Jump and, as of Brawl, gliding completely around the stage.

In Super Smash Bros. for Wii U, the Ω form is set on a much smaller stage retaining some of the designs from the original stage. The original stage can be seen in the background, split up. 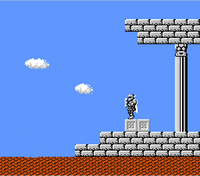 The entrance to Parapa Palace, the first palace of Zelda II: The Adventure of Link.

The platforms on this stage have Hylian writing on them. In Melee, the writing appears to resemble the Hylian language in The Legend of Zelda: Ocarina of Time; however, it is not actually based on the language. In Brawl onwards, it is based on the Hylian language from The Legend of Zelda: The Wind Waker. When decoded, the text reads スマッシユ・ブラザーズ, which translates to "Smash Brothers".

As an extremely large stage, it is banned in all serious tournaments in every game it is featured in because its size and build provides opportunities for what is perceived broken camping and stalling. The many walls allow for wall infinites, and the underground section creates a large cave of life, allowing characters to live to extremely high damages that are effectively impossible to reach in normal conditions. The geometry of the stage also allows players to circle camp endlessly with characters such as Meta Knight or Jigglypuff, encouraging extremely slow hit-and-run matches, as well as favoring stalling. As a result of having areas where the upper blast line is much closer to the stage than the horizontal blast lines, this stage also gives characters with powerful vertical finishers a benefit over those with powerful horizontal finishers.

Temple Race is a gameplay variant described in Melee's instruction booklet. It suggests that players define a route through the complex stage, begin a timed match, and race to see who can complete the most laps before the timer expires. As computer players will only fight, this is a players-only variant.

Description in the Instruction Booklet[edit]

Play a MELEE battle in Time Mode. Set the time and choose the HYRULE TEMPLE stage. Choose a particular route, then see who can complete the most laps within the time limit.