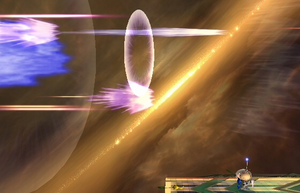 When a character passes the blast line, a colorful "blast" (hence the name) occurs.

A blast line is an invisible boundary on a stage that a character cannot cross without getting KO'd, and causing an opponent to go beyond them are the standard means of KOing opponents outside of non-standard modes. Blast lines are usually placed beyond the borders of the screen in which the stage is shown.

There are four blast lines, usually referred to as "bottom"/"lower", "left", "right", and "upper"/"ceiling" (alternatively, "north"/"south"/"east"/"west"). From Super Smash Bros. Brawl onward, a diagonal-pointing explosion is displayed if a character is KO'd in a corner, but this is only to improve the explosion's visibility.

Most stages have left and right blast lines which are far away from the edges of the stage's platforms, and so cannot readily be walked into. Some stages, however, have what are known as walk-offs, where a stage's platform doesn't stop at a ledge and instead goes all the way to the left and/or right blast line, which allows players to "walk off" the stage's boundaries and be KO'd (both versions of Mushroom Kingdom and Onett are prominent examples). The exceptions are Balloon Fight and Mario Bros. (in Ultimate), where walking off the side of the stage wraps the player around to the other side. However, fighters are KO'd as usual on either stage if they are launched into the blast line. There is additionally a lower blast line which is triggered by falling below the bottom of the screen, which is what KOs characters that fail to recover after being knocked off the stage. Some stages have full floors and walls that prevent access to certain blast lines, but they still exist, should a character be glitched through the stage.

The upper blast line is different from the others in that characters can freely pass it without being KO'd in most situations; characters can freely jump and attack above the blast line (the cause of the Luigi ladder). Characters are only KO'd off the top if they are standing on platforms that leave the stage or they are being propelled upwards by knockback (including from windboxes), a broken shield, a thrown Screw Attack, or the Wario Waft. These characteristics do not apply in the original Super Smash Bros.; the top blast line in said game will KO characters regardless of how they pass it.

The game's camera refuses to pan or zoom enough during gameplay to actually "see" the blast lines (although the lines themselves are invisible, as can be evidenced when the camera is rotated while pausing). When a character is between a blast line and the camera's view (or above the upper blast line without dying), they will appear in a bubble and slowly take damage. This is known as Magnifying-Glass Damage.

Items and projectiles that cross the blast lines are removed from play (except for, again, the upper blast line). The Soccer Ball in SSB4 and beyond is an exception, warping back onto the stage if it crosses a blast line. Also a Smash Ball can freely cross blast lines until it leaves gameplay either by disappearing or being used.

The Controls test stage in Smash 4 and Ultimate is the only stage in the series to lack blast lines.

In the first game, blast zones are fairly big, which makes characters with good recoveries, like Pikachu, live longer on most stages. Despite this, the absence of air dodging and wall teching, and the high hitstun, coupled with the fact there are few characters that boast long, safe recoveries, make edgeguarding an easy task compared to other Smash titles.

While the first game previously featured big blast lines, for the most part Melee features smaller ones, though there are some exceptions, like Dream Land. Combined with the faster falling speeds, this makes edgeguarding technically easier than in the previous game, despite the significantly lower hitstun and the introduction of air dodging.

Brawl's blast lines seem to retain the same size as Melee's blast lines. However, changes to air dodging as well as the introduction of hitstun and momentum cancelling have made edgeguarding a harder task in the game.

With the addition of Assist Trophies, the stage's blast lines will be moved if Devil is summoned.

In The Subspace Emissary's side-scrolling stages, the upper blast line is stripped of its unique properties; characters don't need to be in knockback to be KO'd by it and don't fall into the background or foreground. On the other hand, the blast lines are otherwise disabled if the character is not in hitstun; the camera will follow Player 1 and keep them away from the blast lines, while Player 2 will do a Space Jump instead of being KO'd. If a hit is momentum cancelled or otherwise interrupted, the character is still vulnerable to the blast lines for the full duration of the hitstun.

In Super Smash Bros. for Nintendo 3DS, blast lines have become much larger; specifically, most are about 2/3 of the distance of Final Destination. These allow for even lighter characters to live up to 200% damage on smaller stages such as Battlefield. However, it also forces several characters to grab the ledge when recovering instead of just landing on the stage. When combined with the removal of edge-hogging, this allows for many more edgeguarding techniques along with the addition of the edge trump mechanic. Certain returning stages, such as Corneria, have their usual smaller blast lines to match their respective original games.

By contrast, Super Smash Bros. for Wii U used to feature the smallest blast lines in the whole series (with only a select few having big blast lines, like PAC-LAND), being significantly smaller than in the 3DS version and being in fact smaller than in Melee and Brawl. This makes edgeguarding easier than in the 3DS version, though not as easy as in Melee or 64, where edge-hogging is possible.

In addition, in both versions, Screen and Star KOs no longer happen in the last few seconds of a match (save for an unknown glitch which causes Star KOs and Screen KOs to still happen). They also might not always occur when a character is KO'd across the upper blast line.

In a first for the series, blast lines are visually represented in a small graphic (called the radar in-game), similar to how they are delineated in Melee's debug mode, that appears at the side of the screen whenever a player approaches the camera boundary. Color-coded dots in the graphic indicate the player's position in the zone between the camera's boundary and the blast lines. This graphic can be made smaller or turned off entirely in the options.

An additional, lower "meteor blast line" now exists on all stages. This blast line sits between the camera's lower limit and the regular blast line and affects fighters with a speed greater than 3.[1] This allows players to go for riskier attacks (such as fast-fall down-airs) or to ensure a meteor smash KOs an opponent before they get to act again. 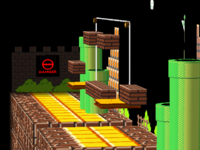 The blast lines on the Melee version of Mushroom Kingdom.