Not to be confused with KO Stars. 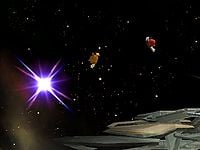 Characters fly away from the main stage as they are turning into a star, demonstrated with Wario in Lylat Cruise.

A star knock-out or star finish (星バースト, Star Burst), abbreviated as star KO, internally known as Hoshikie in Smash 4 and Twinkle in Ultimate, is a type of KO that can occur beyond the upper Blast line in the Super Smash Bros. series. They often last about 2 seconds and are the longest type of KO, often leaving their perpetrator safe from the victim.

When characters are knocked beyond the upper blast line (save for a few exceptions), they fly through the background and away from the stage while usually screaming, crying, roaring, yelling or shouting, and eventually disappear as a star. In Melee, Brawl, and Ultimate, this has the longest duration out of any KOs. Along with Star KOs, there is a chance of a Screen KO happening instead, where characters slam into the camera.

In Smash 64, the duration allotted for Star KOs, along with Screen KOs, are noticeably longer than in Melee onward. Depending on the camera angle, the victim will often not become visible until nearly after they finish their Star KO voice clip, making the animation not synchronize with the voice clip, with the exception of Pikachu and Mario, whose Star KO voice clip is slightly longer than the rest of cast.

Starting with this game, the enemy team can no longer be Star or Screen KO'd under normal circumstances (with the exception of Event 37: Legendary Pokémon for unknown reasons), presumably so that the game will not delay a next enemy's spawn as much as in Smash 64. Most horde battles in single-player modes (except Classic Mode) also disable Star and Screen KOs for similar reasons (see below). Their animations are also much faster, now properly synchronizing with the voice clip across the cast. Oddly, in Mushroom Kingdom II, the victim fades out faster than usual before turning into stars.

Star KOs in Brawl are generally identical to its appearance in Melee, but the voice clips are given a reverberating effect, similar to those used for Final Smashes and the announcer's voice, as if the victim is far away from the stage (though they are actually added by the game rather than their sound files being echoed, albeit still fading out at the end). Oddly, in Flat Zone 2 and Hanenbow, if the victim's status conditions are still in effect, they will not be aligned with the character (i.e. the frozen block and character fly off separately).

For the first time in the series, Brawl introduces a character who is silent while being Star KO'd, that being Olimar. Additionally, there are a handful of characters who shout "No!" while being Star KO'd, which are Snake and Sonic, as well as veteran Peach. Kirby similarly makes an "Iyah!" sound, a Japanese phrase for expressing dismay or shock, while Wolf and R.O.B. emit a howl and multiple beeps respectively while Star KO'd. Samus and Mr. Game & Watch's Star KO sounds are also renewed.

Star KOs in Smash 4 are almost identical to how they acted in Brawl, though voice clips now use a smooth echo effect instead of a reverberating effect used in Brawl. However, both Star and Screen KOs are no longer guaranteed to occur; the upper blast line will cause either a Blast KO, a Star KO, or a Screen KO at random. Players launched at extremely high speeds, however, are not Star KO'd or Screen KO'd. In addition, presumably as to solve balance issues, Star KOs no longer occur when there's only five seconds remaining in a timed match and in Sudden Death (unless an unknown glitch occurs or in Trophy Rush); Screen KOs were increased in length, and as a result, Star KOs actually last shorter than Screen KOs. Lastly, Star KOs are now intentionally disabled on some stages, largely those with 2D backdrops or background elements that obscure the victim.

Smash 4 introduces more characters that remain completely silent when Star KO'd, with these being Mega Man, the Mii Fighters, Pac-Man, Villager, and the wireframe version of Little Mac. Rosalina and Bowser Jr. use one of their falling voice clips from Mario Kart 7 and Mario Kart Wii respectively, and the Koopalings (with the exception of Morton) use one of their defeat voice clips in New Super Mario Bros. games. As a result, Lemmy shouts "No!" while being Star KO'd; male Wii Fit Trainer similarly does this (albeit in the NTSC version only), while Sonic has lost the trait in the English versions as of this game, as he instead uses his death sound ("Whoa!") from Sonic Generations. As Dr. Mario's voice clips have been updated to match Mario, he now uses Mario's Star KO voice clip from Brawl.

Ultimate introduces a new animation for Star KOs; the characters now tumble away from the screen, akin to how Screen KOs worked in Melee and Brawl, and seemingly go a much further distance away from the stage (though this is an illusion, since the characters actually start shrinking the further they fly away, as easily seen in Temple). Most characters also now use a sideways version of their tumbling animations, with the exceptions of Mr. Game & Watch (due to his 2D nature), Cloud, Corrin, Incineroar, Inkling, Shulk, Joker, Min Min, Pyra, Mythra, and Sora, who spin forwards like their normal tumbling animation (due to their normal tumbling animations having them already facing the screen). The star is also now a purple color. Additionally, the Boss Galaga will always cause a Star KO and cause the character to go into their normal Star KO animation seen in the previous games. The physics of Star KOs are otherwise unchanged from Smash 4.

Isabelle, Steve, and Piranha Plant also remain silent when Star KO'd, in addition to all previous veterans that were silent during their Star KO. For the first time in the series, there are characters who speak a complete sentence during Star KO; Pit has a unique Star KO line, where he yells "I never learned how to read...!". This is a reference to Chapter 17 in Kid Icarus: Uprising, where he yells the same line after his Power of Flight is cut en-route to the Aurum Fortress [1]. Byleth speaks during a Star KO, shouting "My battle ends here...!", a reference to one of their defeat lines from Fire Emblem: Three Houses. Both characters also do not speak in the Japanese version. In addition to all previous cases retained from Brawl and Smash 4, Daisy's Star KO also has her shouting "No!", as she does when falling off of race tracks/a platform in Mario Kart Wii and Mario Party 9 respectively. Similarly, Min Min shouts "哎呀！" (Oh no!). Mr. Game & Watch now uses the same beep used for his up and side taunts, while Dark Samus reuses Samus' Star KO sound. Roy's English Star KO voice clip, much like Zelda in Melee, is infamous for being overdone and horrifying, to the point that his voice actor, Ray Chase, acknowledged this influence on Twitter.

The Team Rocket trio "blasting off again" in the Pokémon anime.

It is a recurring trope, especially in Eastern media, for characters and objects to be sent flying into the sky, leaving behind a twinkling star when they vanished from sight. Since Star KO'ing an entire team in Melee yields the Rocket KO bonus, the Star KOs in Smash may be intended as a reference specifically to the trope's use as a running gag in the Pokémon anime, where the Team Rocket trio would often be sent "blasting off again" whenever they were defeated.

Unless otherwise noted, all of these exceptions also apply to Screen KOs.